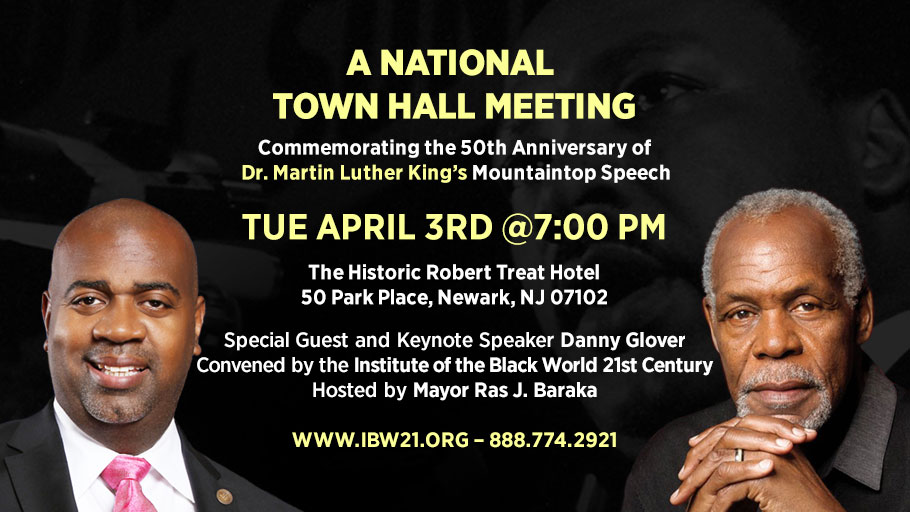 To honor the life and legacy of Dr. Martin Luther King Jr. on the 50th Anniversary of his martyrdom and to commemorate his famous “Mountaintop Speech,” the Institute of the Black World 21st Century (IBW) will convene a Town Hall meeting in Newark, NJ on April 3 at the historic Robert Treat Hotel.

The Town Hall Meeting is intended to focus on Mayor Ras Baraka’s quest to make Newark a “model City.” The gathering begins at 7:00 PM (doors open at 6:30 PM). Danny Glover, actor/activist and UN Ambassador for the Decade of People of African Descent, will  be the Keynote Speaker.

Dr. Ron Daniels, President of IBW, will moderate the Town Hall meeting, which will be Webcast on IBW’s site (www.ibw21.org) beginning at 7 pm.

Over a two-day period, IBW will also convene a Symposium on the need for an Urban Marshall Plan and an Economic Summit exploring possibilities for support and investment in Newark’s progressive, people-based economic development plan.

Scores of urban planners, policy specialists and potential investors from across Black America will be attending these events.

“The systemic assaults in this country and around the globe on the daily life of the most vulnerable citizens and the devastation of our planet urgently begs Dr. King’s question, ‘Where do we go from here: chaos or community?’ In his spirit, we must revitalize our inner cities and build global-justice solidarity at home and abroad,” said Danny Glover.

In commenting on the significance of the Town Hall meeting, Mayor Baraka noted that since World War II, the federal government has severely damaged our cities through subsidizing the growth of suburbs, encouraging redlining, slashing investment in low income housing, and so much more.

“Today, a president seems determined to destroy whatever progress our cities have made toward social, economic and racial justice. In the name of Dr. King, we come together today in Newark to recommit ourselves to investing in ourselves and to demanding an Urban Marshall Plan to rebuild our cities that have been so long neglected,” he added.

“We believe that Dr. King would have been in accord with the renewed call for an ‘Urban Marshall Plan’ to provide massive Federal support for the revitalization of inner city communities devastated by decades of disinvestment, de-industrialization and blatant neglect,” Dr. Daniels commented. “The economic summit is very much in keeping with Dr. King’s conviction which he expressed in his ‘Mountaintop Speech’ that Black people should utilize our existing resources, what we have in our hands to buttress the internal economies of our communities.”

IBW chose to convene this Town Hall meeting in Newark because of the city’s valiant history of struggle, resistance, resiliency and its righteous quest to transform long-distressed and marginalized neighborhoods into a model for people-centered community economic development.

“This Newark initiative may mark the beginning of an approach and a process that could be replicated nationwide,” said Dr. Daniels. “There is the potential for a powerful collaboration among public and private sector leaders, community economic development specialists, urban planners, policy analysts and community organizers that can contribute to positive urban transformation in a manner that would make Dr. King proud.”

For more details visit the Web site of the Institute of the Black World 21st Century (www.ibw21.org).