Haiti: The richest country in the Western Hemisphere by Patrick Delices

Toward A Strategic Partnership to Uplift the First Black Republic

From January 15-19, 2014, a few a days after the fourth anniversary of the catastrophic earthquake that devastated Haiti, the Haiti Support Project (HSP), an initiative of the Institute of the Black World 21st Century, was pleased to host a high-level team from the historic Kappa Alpha Psi Fraternity for a visit to the world’s first Black Republic.  The primary purpose for the visit was to expose them to the work HSP is undertaking in Haiti and to meet with key stakeholders and leaders on the ground. The objective was to assist the Fraternity to make critical decisions about engaging/supporting projects in Haiti.

While sharing information with the team about various projects and initiatives that have been  supported over the years, the primary focus of the visit was on HSP’s Model City Initiative (MCI) in the lovely town of Milot in the Northern region of the country near Cap Haitien. Milot is located at the foot of the mountain where the Citadel stands as a proud symbol of Black freedom and self-determination.  HSP believes that Haiti’s history and culture are its greatest assets and that there is no greater asset than the Citadel — the magnificent mountaintop fortress built by King Henri Christophe to deter future invasions  after the Haitian Revolution.

The principal goal of the Model City Initiative is to transform Milot into a Mecca of cultural-historical tourism as the foundation for people-based social and economic development; the kind of development that will benefit the vast majority of ordinary people in the town/area/region and not just a privileged few. Therefore, HSP is committed to assisting the Local Development Committee in Milot (CRM) and the Destination Haiti Foundation (DESTHA) to strengthen the socio-economic infrastructure of the town in terms of schools, health care facilities, jobs, entrepreneurships, sustainable energy, communications and business/economic investment in tourism related enterprises.

HSP sincerely hopes that the January 15-19th visit to Haiti will mark the beginning of a milestone Partnership with Kappa Alpha Psi Fraternity; one that will help to firmly plant a “Black footprint” on the development of the First Black Republic with the shield of the Fraternity serving as a bright beacon of promise and hope for our sisters and brothers in Haiti. The suggestions/recommendations in this brief document are submitted as a potential framework and starting point of a momentous relationship.

Members of the Delegation

(Photos and videos by Don Rojas)

Assorted Video Clips from the Recent HSP Visit to Haiti

The Citadelle Laferrière or, Citadelle Henry Christophe, or simply the Citadelle (in English, spelled Citadel), is a large mountaintop fortress in northern Haiti, approximately 17 miles (27 km) south of the city of Cap-Haïtien and five miles (8 km) uphill from the town of Milot. It is the largest fortress in the Americas and was designated by the United Nations Educational, Scientific and Cultural Organization (UNESCO) as a World Heritage Site in 1982—along with the nearby Sans-Souci Palace. The mountaintop fortress has itself become an icon of Haiti. The Citadel was built by Henri Christophe, a key leader during the Haitian slave rebellion, after Haiti gained independence from France at the beginning of the 19th century.[1]

The massive stone structure was built by up to 20,000 workers between 1805 and 1820 as part of a system of fortifications designed to keep the newly independent nation of Haiti safe from French incursions. The Citadel was built several miles inland, and atop the 3,000 ft (910 m) Bonnet a L’Eveque mountain, to deter attacks and to provide a lookout into the nearby valleys. Cap-Haïtien and the adjoining Atlantic Ocean are visible from the roof of the fortress. Anecdotally, it is possible to sight the eastern coast of Cuba, some 90 miles (140 km) to the west, on clear days.

The Haitians outfitted the fortress with 365 cannons of varying size. These were obtained from various nations, and still bear the crests of 18th Century monarchs. Enormous stockpiles of cannonballs still sit in pyramidal stacks at the base of the fortress walls. Since its construction, the fortress has withstood numerous earthquakes, though a French attack never came and it was eventually abandoned.

Henri Christophe initially commissioned the fortress in 1805. At the time, Christophe was a general in the Haitian army and chief administrator of the country’s northern regions. In 1806, Alexandre Pétion launched a coup against Haiti’s emperor, Jean-Jacques Dessalines though General Christophe was aware of this through his system of spies he did not warn Dessaline viewing his assassination as a necessary evil that would permit him to achieve his goals. Dessalines’s death led to a power struggle between Christophe and Pétion, which ended with Haiti divided into northern and southern states, with the north under Christophe’s presidency by 1807. He declared himself king in 1811.

The Citadel was part of a system of fortifications that included Fort Jacques and Fort Alexandre, built on the mountains overlooking Port-au-Prince. Dessalines ordered those forts built in 1805 to protect the new nation against French attacks.

In the event of an invasion, Christophe planned to have his military burn the valuable crops and food stocks along the coast, then retreat to the fortress, setting ambushes along the sole mountain path leading to the Citadel.

Christophe suffered a stroke in 1820, and some of his troops mutinied. Shortly afterwards, he committed suicide—according to legend, by shooting himself with a silver bullet. Loyal followers covered his body in quicklime and entombed it in one of the Citadel’s interior courtyards to prevent others from mutilating the corpse. 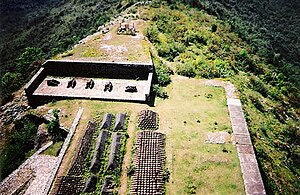 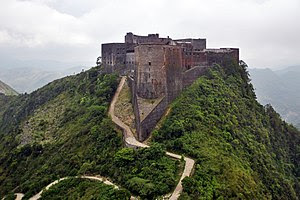 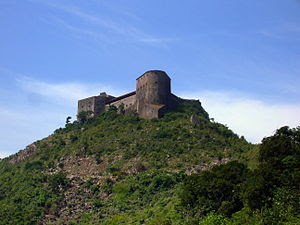 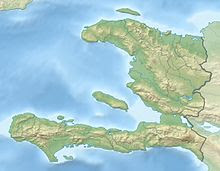 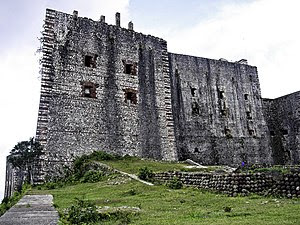 The colossal physical dimensions of the fortress have made it a Haitian national symbol, featured on currency, stamps, and tourist ministry posters. The fortress walls rise 130 feet (40 m) from the mountaintop and the entire complex, including cannonball stocks but excluding the surrounding grounds, covers an area of 108,000 square feet (10,000 m2). Workers laid the large foundation stones of the fortress directly into the stone of the mountaintop, using a mortar mixture that included quicklime, molasses, and the blood of local cows and goats—and cows hooves that they cooked to a glue and added to the mix to give the mortar added strength and bonding power.

Cannonball stockpiles, viewed from the roof

Large cisterns and storehouses in the fortress’s interior were designed to store enough food and water for 5,000 defenders for up to one year. The fortress included palace quarters for the king and his family, in the event that they needed to take refuge within its walls. Other facilities included dungeons, bathing quarters, and bakery ovens. Also visible is the tomb of Christophe’s brother-in-law, killed when the gunpowder room he was in exploded.

The Citadel’s appearance from the trail leading up to its base has been likened to the prow of a great stone ship, jutting out from the mountainside. The structure is angular and assumes different geometric forms based on the viewer’s orientation. Some of the angles on the Citadelle were intentionally put there by Christophe to deviate cannonballs if attacked and the Epaulette is a great example of using angles to deviate and deflect shots. Hundreds of years later the use of angles were used by the Russians on their tanks during WWII as a defensive tool. Though most of the fortress has no roof as such (the interior top is a latticework of stone walkways), some slanted portions are adorned with bright red tiles. The fortress has been repaired and refurbished several times since its construction, including in the 1980s with help from UNESCO and the World Monuments Fund, though little of it has been replaced and its design remains the same.

The Citadel is one of the most popular tourist destinations in Haiti. Directions to and history of the fortress are provided by self-appointed guides from the town of Milot. Near the entrance to Sans-Souci Palace, which is at the start of the trail to the Citadel, visitors may be asked to pay a small fee. Visitors are also encouraged to rent a horse for the uphill trek. The first portion of the seven-mile (11 km) trail is navigable by 4WD vehicle, although infrequentlandslides and construction projects sometimes make this unreliable. Numerous people live along the trail and sell souvenirs or drinks, such as fresh coconut juice, to travelers. Drinks are a necessity in the tropical heat. The trail is paved stone, generally smooth and in good condition.

About three-quarters of the way up from the parking lot, visitors must complete the final portion on horseback or on foot. The entire seven-mile-trail, starting in Milot, is almost completely uphill, but can be walked by experienced hikers who carry plenty of water. Most of the interior of the Citadel fortress itself is accessible to visitors, who may also climb the numerous staircases to the fortress’s roof, which is free of guardrails. On a clear day, the city of Cap-Haïtienand the Atlantic Ocean can be seen to the north. Because of its elevation the top of the Citadel is used by United Nations Stabilization Mission in Haiti (MINUSTAH) for a Radio repeater, with an antenna on the highest point.

Haiti: The richest country in the Western Hemisphere by Patrick Delices