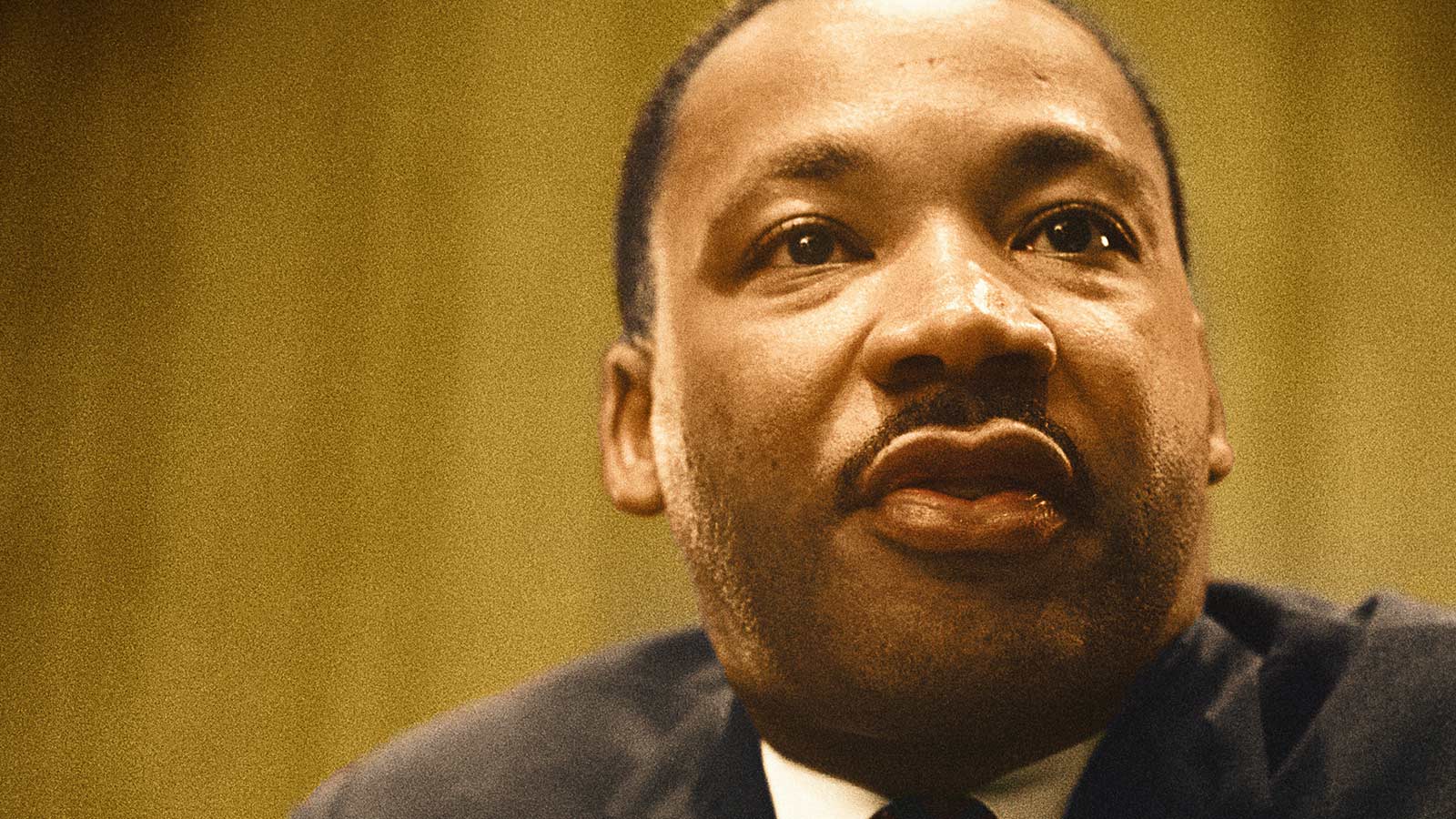 On the day of April 4th, this Day of Sacrifice, this day of the martyrdom and assassination of Dr. Martin Luther King, Jr., we gather together to raise up and pay rightful homage to him, his life and legacy. And we call April 4th his Day of Sacrifice and of martyrdom, for we wish to focus on him, his life and legacy rather than simply his assassination and death on this day. Indeed, as we continuously point out, we do acknowledge the gross evil and great loss his assassination represents. But we self-consciously shift the emphasis from what his assassins and the enemies of African and human freedom did to him, to his self-conscious choice to risk and ultimately offer his life in the cause of African and human freedom, justice and equality in this country and the world.

And in this audacious and uncompromising choice, he left us a legacy and lessons of morally compelling service, ultimate sacrifice, and courageous and uncompromising struggle. Thus, he tells us that “Human progress is neither automatic nor inevitable . . . Every step toward the goal of justice requires sacrifice, suffering and struggle; the tireless exertions and passionate concerns of dedicated individuals.”

It is how he conceived and carried out his mission to bring a great shared good in the world in the tradition of our ancestors that he taught us a liberating and uplifting mission and morality of what he defined as “sacrifice, suffering and struggle” in the interest of an expanded realm of freedom in this country and the world which included us and all others. He tells us that to achieve freedom, enjoy justice and experience real equality, we must be willing to serve, sacrifice, suffer and struggle to achieve these shared goods.

He affirms and reaffirms that “we’ve got to give ourselves to the struggle to the end.” Here he suggests the Kawaida conception of sacrifice in its most expansive form of self-giving. As self-conscious self-giving, it requires giving of our heart and mind, our time, our efforts, our material and financial goods, and ultimately, if we truly believe and are committed, the wholeness of ourselves. Now giving the wholeness of ourselves can mean giving our lives to the struggle or also choosing to offer both our life and death to the struggle.

Nana Martin and Nana Malcolm and others made this last and ultimate sacrifice. But also, Nana Harriet Tubman and Nana Fannie Lou Hamer gave the wholeness of themselves and their lives to the liberation struggle and self-consciously lived with the daily risk of death without backing down or reducing their commitment to our righteous and relentless struggle. Indeed, it is Nana Harriet who told us that “I had reasoned in my mind there were one of two things I had the right to: liberty or death; (and) if I could not have one, I would have the other.” And Nana Fannie Lou Hamer told us “sometimes it seems like to tell the truth today is to run the risk of being killed. But if I fall, I’ll fall five feet four inches forward in the fight for freedom. I’m not backing off.”

Now most of us will not be called to make such an ultimate sacrifice, but all of us can and must be ready to give our hearts and minds, our time and efforts, our material and financial goods. Dr. King stresses these in his emphasis on service, sacrifice and struggle, but also shared with us and shows us we too must be ready to offer the ultimate in what he calls “this bitter but beautiful struggle.” It is this larger conception of Nana King’s mission and meaning, placed in the context of the African American culture of struggle and our people’s moral commitment to shared good in the world, that we do honor to him. And we also thereby do honor to his people who brought him into being and chose and supported him as a righteous witness to the world for them and a sign of “a new world a-coming,” being born in the resurrecting and radically reordering womb, water and fire of struggle.

Nana King, rooted in the African American culture of righteous and relentless struggle, urges us to demonstrate in practice “a divine dissatisfaction” and “dangerous unselfishness” in this society and struggle. He wants to keep the faith, hold the line and continue the struggle, regardless of hardships, temporary setbacks, understandable apprehensions and routinely offered seductions and suppression of a society sick with “racism, materialism and militarism” often masked as a humanitarian initiative. Indeed, he calls on us to be those whom history will judge as “a great people, a Black people, who through their struggle, injected a new meaning and morality in the veins of civilization.” And he says, “This is our challenge and overwhelming responsibility.” It is in its essence a call to reaffirm our historical and ongoing role as a moral and social vanguard in this country and world through our moral sensitivities and choices, our thought and transformative practice.

The centering focus of King’s mission in his community, in society and in the world is the principle and practice of service. He sees service morally informed by the position that “Life’s most persistent and urgent question is what are we doing for others?” In other words, what good are we bringing and sustaining in the world? It is of vital importance, as our ancestors taught us, to ask and to answer this question in self-conscious and committed ways. And the fundamental focus of this service, this good-doing, these acts of loving-kindness, sharing good and other-directedness must be, Dr. King says, for “the suffering, the helpless, the outcast,” indeed “for the weak, for the voiceless, for the victims of our nation” – internally and externally.

It is in this spirit of service, this commitment to the shared good of all that Dr. King defines himself, above all, as a servant of the people, especially a servant of “the least among us,” the vulnerable, the poor, the downtrodden, the disempowered, the oppressed, and those marginalized and maimed in a variety of ways. Thus, he states, that in his eulogy, he wants the speaker to say that he “tried to give his life serving others.” And he enumerates the ways he tried to serve, saying that we should say of him, he “tried to love somebody, be on the right side on the war question, to feed the hungry, to clothe those who were naked, to visit those who were in prison and to love and serve humanity.”

It is important to state that Dr. King is building here on the Black religious tradition and particularly on the Black Christian tradition he was born and nurtured in, embraced, expanded his education in and used to become a noble witness to the world for his people. I make this point again because too often there is a tendency to separate Dr. King from his people and the rich spiritual and ethical culture they have created in life, work and struggle. And in doing so, people miss the central source and indispensable anchor of his moral and spiritual sensitivities and thought and his social practice. The focus on service as the indispensable, liberating and uplifting practice of being Black and being Christian is a legacy already bequeathed and left for Dr. King to embrace, deepen his understanding of and use to formulate and pursue his own thought and activist initiatives.

And of course, the legacy extends from deep thinkers like Nanas David Walker, Maria Stewart, Martin Delaney, Anna Julia Cooper, Alexander Crummell, Ida B. Wells-Barnett, W.E.B. DuBois, Mary McLeod Bethune, Howard Thurman, Mordecai Johnson, Benjamin Mays, A. Philip Randolph, Dorothy Height, Vernon Johns and others, through his peers Nanas Ella Baker, Bayard Rustin, Malcolm X, Coretta Scott King, Fannie Lou Hamer, Joseph Lowery, C.T. Vivian, James Lawson and others. It is they and so many others who gave Dr. King philosophical foundations and offered creative challenge to think in deep, diverse and expansive ways. He was thus a recipient of a rich heritage and one of the towering figures in a generation of great leaders who complemented, creatively challenged, and strengthened each other in the shared and awesome movement of our people through the oppositions and affirmations of history toward a new, just and good world.