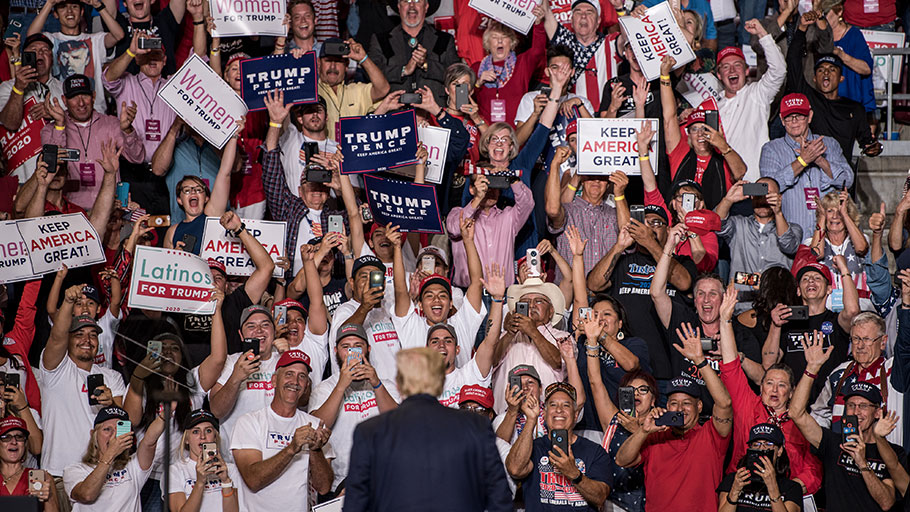 You Are Here: Home » Blog » Commentaries/Opinions » Trump’s 71 Million are Far More Than a Bunch of Angry White Guys

Ever since Trump first took the Oval Office this has been virtually written in political stone. The prototype Trump backer is a poorly educated, KKK or white nationalist loving, slob of a blue collar white male worker or farmer in the backwoods of the Deep South or Midwest who alternately fears and loathes Blacks, Hispanics, gays, liberals of all stripes, former President Obama, and big government. Trump’s 71 million votes proved this was always a dangerous, and self-serving myth.

Even before the first vote was cast in any primary or caucus, in late 2015, Civic Analytics, a Democratic data firm, surveyed more than ten thousand Republican leaning voters. It found that far from the ignorant bumpkin who is the butt of much caricature and ridicule to explain away the Trump phenomena, the Trump backers defied popular conceptions and stereotypes with the huge numbers of college educated, suburbanite, business and professionals, young persons, and Hispanics and women who said they’d vote for him.

In the survey, Trump got backing from nearly 30 percent of those under age 29, nearly one fourth of Hispanics, and a quarter of those who held bachelor’s degrees or higher. The demographic of Trump backers held up in the 2016 primaries. In the Northeast states and the Midwest, Trump scored just as big with well-to-do college educated voters in the suburbs as he did with blue collar voters everywhere else.

The brutal sobering fact is that Trump’s 71 million votes is the greatest number of votes that an openly racist, near authoritarian bent candidate has ever gotten in a free election. The vote cut across all gender, race, and ethnic lines.

The Trump vote pattern is not new. The George Wallace campaigns of the 1960’s blended the mix of blatantly racist appeals with thinly disguised racial code words that hammered big government, corrupt Washington bureaucrats, and liberal social programs. Wallace drew lots of applause and bushels of votes from college educated, suburbanites, and women. GOP presidents Nixon, Reagan, George H.W. Bush and George W. Bush picked up on the gold mine of votes that were there for the taking among the disenchanted, fearful, suburbanites, and some ethnics, at all educational levels, and genders.

They played hard on what millions of voters think and that’s that government is too big, intrusive and costly and that the traditional family, conservative religious beliefs, patriotism, a strong military, and a sliced down government are still time tested and noble values that must be fought for and preserved. They are and will continue to push and prod the GOP not to cave into liberals, Hispanics and blacks and become a Democratic lite party.

The fool hardy notion that it’s only ignorant rednecks who wave and shout, act a fool at Trump rallies, and occasionally beat up protesters, gave smug comfort to many Trump loathers. They pointed a finger at them as the predictable racist rabble, and had a field day lampooning, caricaturing, and ridicule Trump as a racist, misogynist, homophobic uncouth boob. That made it easy to just as smugly assure that Trump didn’t have a prayer, and the election was practically in the bag for Hillary.

In 2020, something nearly akin to that almost happened again. For months polls showed that Biden consistently tabbed a double-digit lead over Trump in a head to head match up. The double-digit poll gap was still widely cited days before the election. It was a myth.

A myth in part because many closet Trump supporters lied to pollsters to hide their benign feeling toward Trump. Their duplicity was impossible to detect in the polling samples of likely voters. In greater part it was a myth because the focus of much of the media remained locked on the stereotypical profile of the wingnut, poorly educated white male Trump voter. Nixon’s silent majority was indeed very much alive and well.

Presidential Election 2020 proved one more durable fact. The white males who have been the traditional bulwark of GOP support from the Reagan years on and were Trump’s core backers too, once more ranged from the less educated, blue collar worker to business and professional, university graduates. Many of whom were one-time Democrats. Despite much talk about their virtual disappearance as a political force, the truth is anything but that. They still comprise one in three American voters.

Trump got where he is with a lot of help. And a lot of that help didn’t come from just a bunch of poorly educated angry white guys. It came from everywhere in America.

Earl Ofari Hutchinson is an author and political analyst. His latest book is What’s Right and Wrong with the Electoral College (Middle Passage Press) He is an associate editor of New America Media. He is a weekly co-host of the Al Sharpton Show on Radio One. He is the host of the weekly Hutchinson Report Saturdays 9:00 AM on KPFK 90.7 FM Los Angeles and the Pacifica Network.