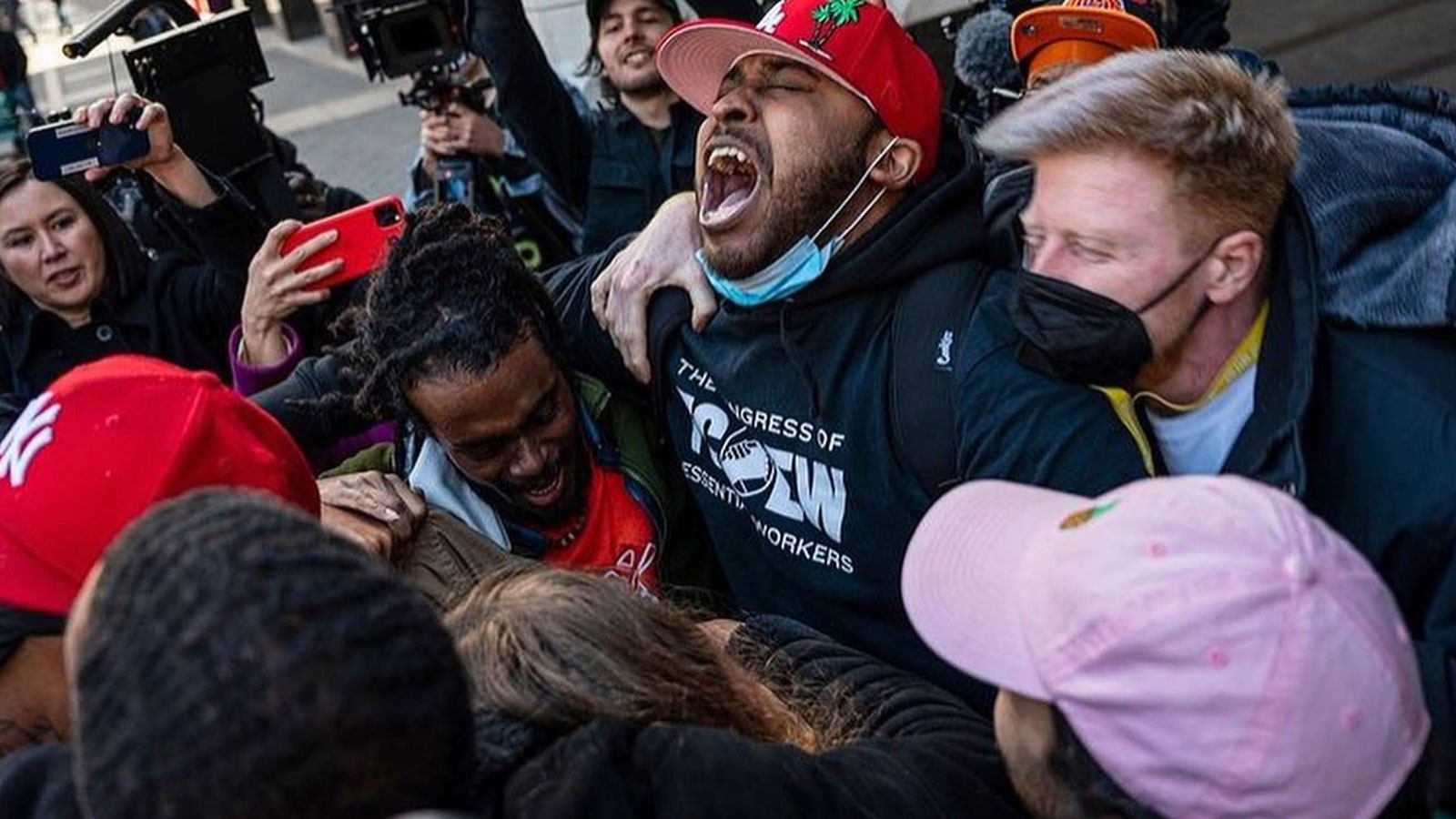 Amazon win shows we need an eclectic and class-wide approach

You Are Here: Home » Blog » Commentaries/Opinions » Amazon win shows we need an eclectic and class-wide approach

By Rand Wilson and Peter Olney, The Stansbury Forum —

Against nearly impossible odds, a new independent union called the Amazon Labor Union (ALU) has won the first NLRB-supervised union certification election at an Amazon warehouse in the U.S.

On Friday, April 1 (no April Fools these workers!) the vote count was 2,654 in favor of the union and 2,131 against at “JFK8,” Amazon’s Staten Island Fulfillment Center.

Several excellent accounts of the vote with interviews of the workers leading the campaign have already been published by Labor Notes and Jacobin. The New York Times also published an excellent article.

Prior to the vote, there was plenty of skepticism about the campaign in the labor movement and among the pundits. With only a small organizing committee, no budget, and no experience up against management’s ferocious anti-union campaign, most predicted a lopsided vote against joining ALU.

What the winning vote makes clear is that after the Covid pandemic there is a much broader uprising occurring among workers. Starbucks baristas, gaming companies’ programmers, and the New York Times digital team have all recently formed new unions. The current “union moment” is having a broad impact.

This win shows that, when it comes to a company of the size and scale of Amazon, the typical organizing tactics and strategies may not apply. We need to have an eclectic approach, recognizing that there will be many successes and failures in a long-term effort to build a strong union at Amazon.

At the same time that Staten Island workers’ ballots were being counted, the votes were being tallied for the NLRB-ordered re-run election at Amazon’s huge Fulfillment Center in Bessemer, Alabama. The outcome looks less promising there: support for the Retail, Wholesale and Department Store Union (RWDSU) union fell short: 993 no votes to 875 yes votes. Nevertheless, the union did much better on the second attempt—and with 416 challenged ballots the final result is still uncertain.

There is one obvious difference between Staten Island and Bessemer, Alabama: the high concentration of union members in the New York metropolitan area (6 percent in Alabama, 20 percent in New York state). Higher union density leads to a positive “word of mouth” message about unions in working-class households that is far more convincing than any leaflet or ad.

The organizers of ALU also broke out of traditional organizing approaches. Workers responded militantly to the company’s scare tactics and began supporting each other as if they already had a union in the workplace.

The Staten Island vote supports what some union organizers call the “metro strategy.” Amazon facilities are highly concentrated in metropolitan areas like New York, Chicago, and Los Angeles where there is broader support for unions. In these areas, besides having giant fulfillment centers like the one on Staten Island, there are also dozens of “last mile” delivery stations with a smaller workforce. Coordinated actions at the delivery stations in just a few cities with a pro-union environment could have a huge ripple effect.

Undoubtedly Amazon will use every legal maneuver possible to avoid ALU being certified as the exclusive bargaining representative for the Staten Island workers. Management will likely file objections to conduct of the election with the NLRB seeking to have the vote reversed. And now the antiunion pressure will be even stronger for the upcoming union vote at LDJ5, a nearby Amazon sort facility where workers will vote between April 25- 29.

Assuming the ALU survives the legal obstacles to certification, all eyes will turn toward the process of negotiating a first collective bargaining agreement for the Staten Island workers. Traditionally bargaining is a buttoned-down legal process with long arduous table talk and legal maneuvering.

Hopefully ALU will recognize that its negotiations for the Staten Island facilities will take place in a fishbowl: the Amazon workforce and the entire labor movement will be watching! That environment necessitates breaking out of the traditional legal straight jacket and conducting bargaining as “theater”—heralding the cause of justice for Amazon workers to the entire New York metro community, the broader labor movement, and Amazon’s customers.

UPS and the Postal Service are Amazon’s closest competitors. Amazon’s business model of super-labor-exploitation poses an existential threat to both the Teamsters and the postal workers’ unions. Similarly, its acquisition of Whole Foods threatens standards at UFCW-organized supermarkets.

These more established unions have already been quietly organizing at other Amazon facilities. Will they have the humility to learn the lessons from ALU’s approach? The initial signs are positive.

After the election results were announced, Teamsters newly-elected president Sean O’Brien said, “I commend anybody who tries to take on a schoolyard bully like Amazon.” Postal Workers (APWU) President Mark Dimondstein proposed, “The organized labor movement should unite and build a multi-union crusade to help organize Amazon workers throughout the country.” Dimondstein said his union is “ready to assist the newly organized workers at Staten Island in any way we can in the coming and challenging battle to win a good first union contract.”

Let’s hope that other unions and the entire labor movement will adopt a similar ecumenical and class-solidarity approach!

Rand Wilson has worked as a union organizer and labor communicator for more than 40 years, most recently as chief of staff for SEIU Local 888 in Boston. Peter Olney is retired organizing director of the Longshore Workers (ILWU) and has been a labor organizer for 50 years.

Peter Olney is retired Organizing Director of the ILWU. He has been a labor organizer for 50 years. He has worked for multiple unions before landing at the ILWU in 1997. For three years he was the Associate Director of the Institute for Labor and Employment at the University of California.