You Are Here: Home » Blog » Commentaries/Opinions » Dr. Julianne Malveaux » Will a Woman Be President in 2020? 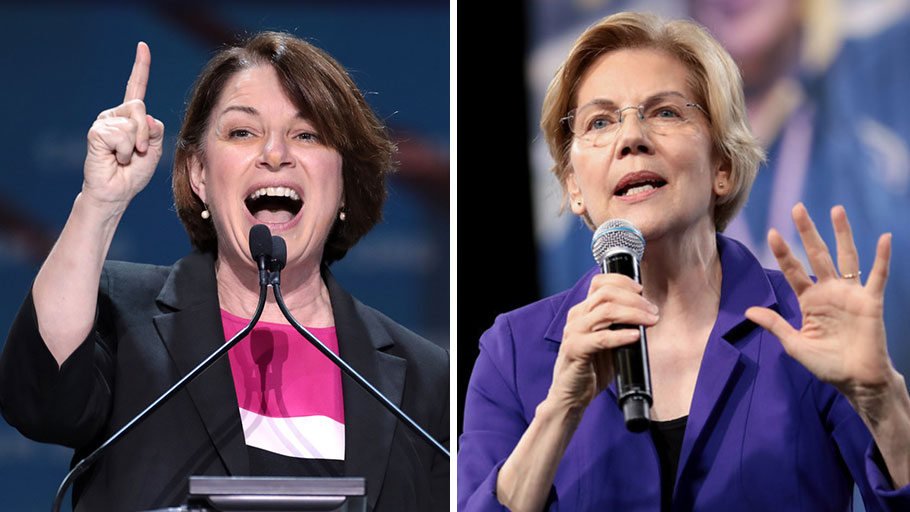 In a most unusual endorsement, the New York Times has endorsed both Senators Elizabeth Warren (MA) and Amy Klobuchar (MN) for the Democratic nomination for President. Apparently, the Editorial Board of the Times disagrees with Senator Bernie Sanders (VT), who allegedly told Warren that a woman could not win the Presidency. I’d love to see the right woman in the White House, but I’ve been among the many who have wondered openly if, in a polarized and sexist United States, a woman can win both the nomination and the Presidency.

Though polls are not a definitive measure of who will win an election, Warren and Klobuchar tend to poll more weakly than the men in the race – Vice President Biden, Sanders, and former Mayor Pete Buttigieg. Have we come such a long way since 2016 that a woman is electable? Can so-called progressive men who want to get 45 out of the White House overcome their gender bias to vote for a woman?

Clearly, the Times not only thinks a woman can win, but in endorsing two women for the Democratic nomination, they are saying that women are the best of the Democrats in the race. And, in the past two years, we’ve seen signs that women are gaining politically. The women’s sweep of the 2018 elections certainly bodes well for women. At the same time, is gender a sufficient qualification for the Presidency? Three years after the first flawed but overwhelmingly successful Women’s March in 2017, the realignment of the March “movement” has illustrated cracks in the foundations of feminism.

These flaws perhaps go back to the scuffle over who should get the vote first between our nation’s first feminists like Elizabeth Cady Stanton and civil rights activists like Frederick Douglass. In resenting the fact that Black men got the vote before white women, those early feminists used extremely disparaging language against Black men, using terms like “savage” to suggest these men did not deserve to vote.

Can anybody say “intersectionality”? Or to make it more clear, use the words of Sojourner Truth and say, “Ain’t I A Woman.” The women’s march movement fell apart because women were not on the same page. Accusations against Tamika Mallory and Linda Sarsour, two of the co-chairs of the March caused much discussion and rancor, so much so that the second Women’s March attracted a fraction of the people who showed up to the first one. And the third March was operated on s different model. It did not equal the excitement or momentum of the first March, although there were many more local marches and other activities associated with the marches.

Women can’t “come together” unless they acknowledge our differences, as well as our similarities. Thanks to Tarana Burke and folks like Professor Kimberly Crenshaw, some Black women are openly addressing issues of race and class in feminism. But I’ve heard few white women, either politicians or intellectuals, deal with issues of racism in the women’s movement. Is there really “a women’s movement”? There are women’s issues, and women’s marches, and an exhilarating display of anti-Trump sentiment three years ago (don’t forget that 53 percent of white women voted for that man), but when do women come together?

In other words, gender is not a qualification for higher office. And if the women endorsed by the New York Times do not fully explore the concept of intersectionality and speak on it, they will likely sideline some votes, even though many others would vote for Bubba the Fool to get rid of 45. Both Warren and Klobuchar are exciting candidates. Warren’s progressive ideas endear her to the left, and Klobuchar’s more moderate approach to social and economic challenges appeals to others. The Times did a good job of contrasting the two women.

But can either win the President? When then one-term Senator Barack Obama ran for President, l liked him very much but didn’t think a Black man could succeed in this racist nation. Thankfully, I was wrong. Can a woman win in 2020? I’m hoping the best candidate will win, and the best candidate may well be a woman.

The student debt crisis is fueling the poverty draft

The student debt crisis is fueling the poverty draft
We Need Your Support — Donate, Share, Sign-Up Ways to Support