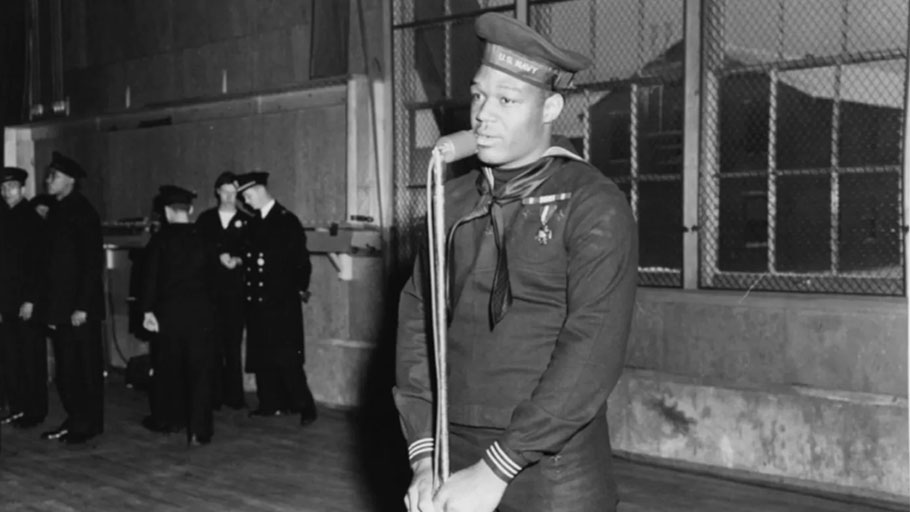 You Are Here: Home » Blog » News & Current Affairs » Doris Miller to become first black sailor to have a Navy aircraft carrier named in his honor

Doris Miller was awarded for his heroism during the Pearl Harbor attack. (U.S. Navy/National Archives)

A black mess attendant was a Pearl Harbor hero. Now an aircraft carrier will have his name.

It was just before 8 a.m. aboard the USS West Virginia, anchored in Pearl Harbor on Dec. 7, 1941, when the first torpedo hit.

Mess Attendant 2nd Class Doris Miller was deep into the day’s laundry when the blast sent one of his lieutenants racing to sound the alarm.

Miller, the 19-year-old son of Texas sharecroppers, was just two years into his naval service. He enlisted hoping to see the world and perhaps come home with the prospects of a good job. The Navy was segregated, and mess was the only duty in which black men like Miller were allowed to serve. He had no gunnery training; in the heat of battle, he would be expected to feed ammunition to the white man operating one of the ship’s .50-caliber Browning antiaircraft machine guns.

The torpedo blast destroyed Miller’s ammo that day, and he was forced to the deck, where he carried injured sailors to safety. But even without gun training, Miller knew he could do more to save his crew. He jumped behind one of the unmanned Brownings, swung it skyward and fired until his belt was empty and crew members were ordered to abandon ship.

Asked later about his heroics, Miller was collected.

“It wasn’t hard. I just pulled the trigger and she worked fine. I had watched the others with these guns,” Miller said at the time, according a biography of Miller by the Naval History and Heritage Command. “I guess I fired her for about fifteen minutes. I think I got one of those Jap planes. They were diving pretty close to us.”

After Dec. 7, Miller was hailed in news reports only as an “unnamed Negro messman hero.”

Miller wouldn’t remain anonymous forever. Months later, he was recognized for his heroics by the Pittsburgh Courier, the influential African American weekly newspaper. He was the first black recipient of the Navy Cross medal — the highest decoration after the Medal of Honor.

And 78 years later, the Navy will name a $12.5 billion aircraft carrier in his honor, the Honolulu Star-Advertiser first reported, on Martin Luther King Jr. Day.

It will be the first aircraft carrier named for a black sailor, the Star Advertiser said, citing Navy records, and joins the growing list of Navy dining halls, YMCA branches, parks, schools and American Legion posts to bear his name.

After Miller was identified, he was celebrated as a hero, even though most reports of the incident accessed through the National Archives do not credit him with downing any of the Japanese planes.

Miller’s actions were enough to inspire the Navy to offer black recruits better opportunities: Four months after the Pearl Harbor attack, Navy Secretary William Franklin Knox announced black recruits would be trained in expanded service roles at an all-black section of Naval Station Great Lakes in Illinois, according to a report by World War II Magazine that was republished last year by the Navy Times. 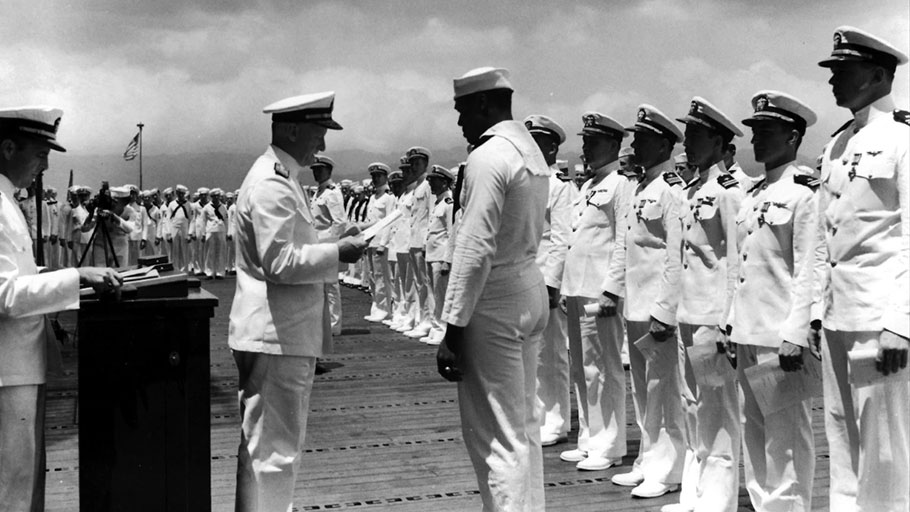 Miller’s story was used to help drive recruitment of black sailors. Less than two years after his heroic turn at Pearl Harbor, he reported to the newly built USS Liscome Bay with a promoted rank of cook third class.

Miller was never able to realize the opportunities his actions spurred within the Navy. On Nov. 24, 1943, a torpedo sank the Liscome. Miller was listed as missing for two years before the Navy declared him dead.

The launching of a new ship bearing Miller’s name is among ongoing efforts to cement his place in U.S. wartime history. Doreen Ravenscroft, executive director of the Cultural Arts of Waco, has been leading an effort for the past decade to build a memorial to Miller in his hometown.

Ravenscroft said Miller is a hero worthy of international recognition.

“He used his own instinct of survival to do what he thought he should do, and his instinct was to defend his country,” Ravenscroft told The Washington Post on Saturday. “The fact that he went beyond the call of duty, we need that today — doing that extra, doing more than what’s expected.”