You Are Here: Home » Commentaries/Opinions » Getting Rid of Trump Means Little With the Other “President” McConnell Still There 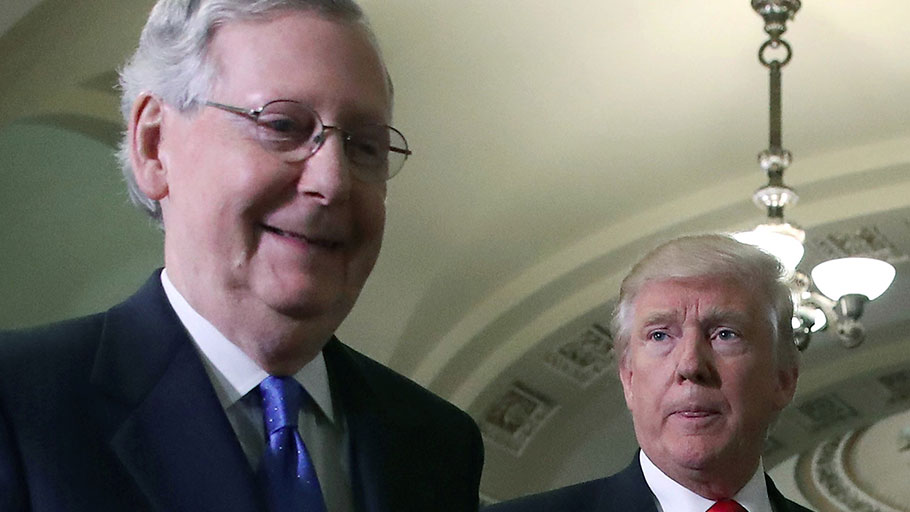 A beaming Senate Majority Leader Mitch McConnell drew raucous cheers from the throng at the 2016 Republican convention when he bragged that he torpedoed then President Obama’s Supreme Court pick Merrick Garland. McConnell wasn’t finished he ticked off a few other pieces of legislation that Obama proposed that he did not like and did everything he could to scrap. McConnell still wasn’t finished. Later he circled back on his Supreme Court obstruction touting it as one of his proud moments.

His boast told much about how one senator could stymie a president, make or break legislation and appointments, and totally dominate government. It was enough to make one ask just who is the real President; Trump or McConnell?

McConnell has answered that question time and again when he says what business the Senate will consider or ignore. It makes no difference how loud or long the public clamors for action on legislation. If McConnell says no, that’s it. His imperial power was on full display in the wake of the mass slayings in El Paso and Dayton. The roar was deafening, and that even included a weak but momentary nod from Trump, for the Senate to so something on gun control legislation even if it meant calling the Senate back from summer break. That was up to McConnell. He said no and that was that.

For much of the nation’s legislative history, there was no such thing as a Senate Majority Leader. A House Speaker yes, this congressional position is clearly spelled out in the Constitution, but a Senate Majority Leader, no. The position evolved over the last few decades. It began to take on the real trappings of power and prestige when Lyndon Johnson took the rein as majority leader in the 1950s. He sweet talked, massaged, compromised, and at times used the bully whip, to goad senators in line to pass key and controversial pieces of legislation, especially civil rights. In the decades after, Senate Majority Leaders mostly worked hard to attain bi-partisanship consensus on passing legislation and approving administration and judicial appointments.

That changed with McConnell and the election of Obama. McConnell repeatedly boasted that he would do everything in his power to make Obama’s presidency a failed presidency. He didn’t quite do that. However, once he grabbed the majority leader post in 2012, as he bragged to the GOP convention in 2016, he dickered, delayed, dodged, and torpedoed any Obama legislative initiative or judicial appointment that he deemed unacceptable.

He was able to do that because he is a shrewd, calculating and crafty politician who knows every parliamentary trick in the book. He flies mostly under the radar scope of the mass media and public. Obama and now Trump get the headlines, but he quietly does the real damage away from the public glare. In the decades of his tenure in the Senate he has learned the rules, procedures, and regulations that govern the Senate backwards and forward. He sets the calendar of what, when or if legislation will go to senate committees and the floor. He has the full and united backing of the GOP majority senators. He has the power to appoint or remove committee chairs. He has a president who despite his occasional grumble, and bluster about McConnell, knows that he is as dependent on him to get anything done in the Senate as anyone else.

So, if there is a President Biden, Warren, Sanders or Harris, with McConnell still holding the power lever in a GOP controlled Senate, he almost certainly will again convene private meetings with GOP party leaders as he did after Obama was reelected. He bluntly told the Senators then that the GOP must do any and everything to insure a congressional firewall against a Democratic president. That means again delay, dither, obstruct, gut, and torpedo initiatives and legislation of a Democratic president from the budget to all level of their appointments.

McConnell will do exactly what he did during nearly minute of Obama’s second term. He will orchestrate and maneuver in the Senate to determine who sits on the high court, the lower court benches, and bags key spots in federal agencies. These are all top-grade posts that initiate, make, and implement crucial policy decisions after many congresspersons are long gone. McConnell will have virtual dictatorial control over which of the president’s nominees are put to a confirmation vote.

Getting rid of Trump while McConnell sits in the Senate driver seat will mean little. A big part of the Democrat’s 2020 presidential election end game must be to oust McConnell. He’s got a viable Kentucky election challenger in Amy McGrath. The DNC, Democratic congressional election committees, state committees, and Democratic grassroots funding organizations should put armies of campaign workers and volunteers and should empty the funding bank backing her campaign. A victory combined with a Democrat in the Oval Office will end once and for all the tyranny of the one man who in effect is the other “President.”

This article was originally published by The Hutchinson Report —

Earl Ofari Hutchinson is an author and political analyst. His latest book is Who Can Beat Trump: America’s Choice 2020 (Amazon Kindle). He is an associate editor of New America Media. He is a weekly co-host of the Al Sharpton Show on Radio One. He is the host of the weekly Hutchinson Report on KPFK 90.7 FM Los Angeles and the Pacifica Network

Holocaust, Haiti, Ferguson and Watts: Honoring Our People Through Struggle

Holocaust, Haiti, Ferguson and Watts: Honoring Our People Through Struggle
We Need Your Support — Donate, Share, Sign-Up Ways to Support