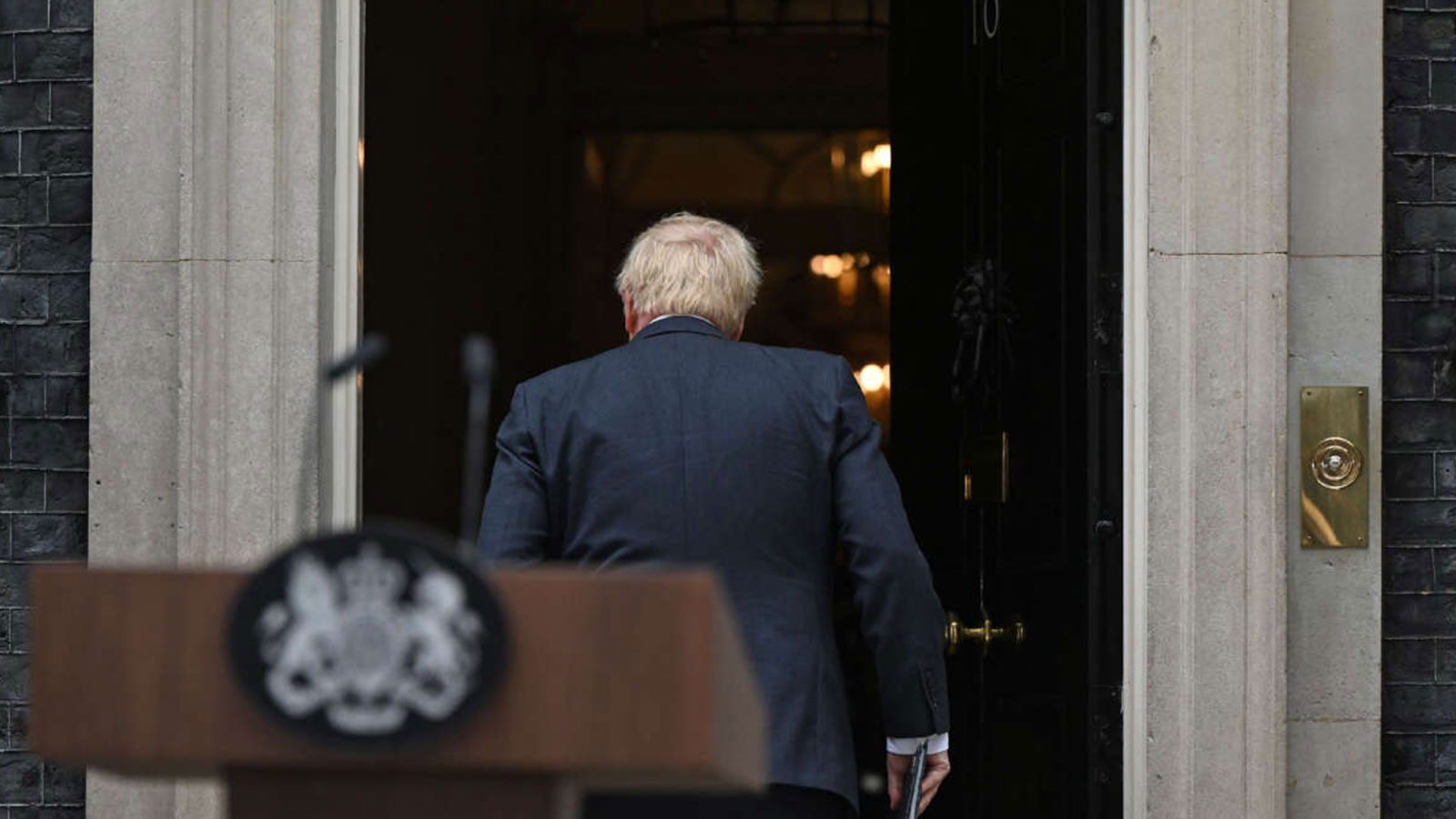 Like Trump, Boris Johnson bulldozed institutions and opposition deemed to stand in the way of his vision.

As I began writing this column from London late Wednesday night, Boris Johnson was still the U.K. prime minister. By 9:15 Thursday morning local time, after an extraordinary 36 hours in which dozens of his ministers and Conservative Party officials had resigned, he’d bowed to the inevitable and announced that he would resign, though he tried to fudge the issue by announcing he would remain in power until the autumn. More likely, however, is that he’ll be forced out of office by his own party within days. It is a hard landing for a man who has flown so high for so long.

Johnson’s demise presents a rare opportunity for a political reset in Britain; for a rejection of the demagoguery, the scapegoating, the corruption and ultimately the sheer ineptitude of his years in office; and for new, less deliberately conflictual thinking on post-Brexit Britain’s relationship to the European Union. It will also remove from the Westminster scene a man who has used his manifest skills to such malign effect over the past decade, building up coalitions, both in Parliament and amongst the electorate at large, based largely around a slew of resentments and misrepresentations of reality.

Johnson, like Donald Trump, has been a wrecking ball of institutions and of political norms for years now. Having made his name as a sensationalist contrarian journalist and commentator, he went on to become mayor of London. As a mayor, he defied easy political stereotypes. He was conservative, yet he claimed to be an environmentalist and loved being seen riding around on his bike. He was an unabashed nostalgist for empire and traditionalism, yet at the same time supported LGBTQ rights and abortion rights. Throughout his tenure he built his national profile, and, when he entered Parliament, he swiftly rose up the ranks of the Conservative Party and into the cabinet.

Always nakedly ambitious, Johnson saw a road to power during the Brexit years by opportunistically siding with the Brexiteers, and then sabotaging Theresa May’s government and her leadership by positioning himself as a hard-liner willing to go to (at least rhetorical) war with Europe in order to “get Brexit done.” It worked; in the summer of 2019, he orchestrated a palace coup against May, then, as the party’s new leader, called a snap general election, which the Conservatives, running on populist, nativist themes, won in a landslide.

Throughout, however, even as his career thrived, he bounced from one scandal to another to another.

Again, like Trump, Johnson long defied political gravity, essentially bulldozing his way through the opposition and practicing a take-no-prisoners kind of politics that knocked down institutions deemed to stand in the way of his political and personal vision, as well as individuals who didn’t tow the Johnson line enough.

In June, after months of scandals surrounding lockdown-era booze-filled parties at 10 Downing Street, stories of influence peddling and concomitant declines in the popularity of Johnson as an individual and of the party that he leads, the prime minister survived an internal Conservative Party no-confidence vote in his leadership, organized through the arcane party governing organization known as the 1922 Committee. But he came out of the vote politically mauled, with more than 40 percent of his own MPs having voted against him. Where most political leaders, faced with an internal rebellion of such a magnitude would have either resigned, or at the very least publicly eaten humble pie, Johnson relentlessly ploughed on, declaring his narrow victory to be definitive, and vowing to implement his “mandate” over the coming years.

This week, however, Johnson’s high-wire act finally came crashing down. The scandal that did him in involves an MP, Chris Pincher, who has a slew of allegations surrounding him regarding the drunken groping of fellow male parliamentarians and others at various Conservative Party functions. Despite knowing of the allegations, Johnson promoted Pincher to deputy chief whip; then, when the allegations became publicly known, he denied he had been aware of them, and corralled his fellow cabinet members to defend him [Johnson]. When it became clear that he was lying to the public, to Parliament and to his own colleagues in the cabinet, Johnson’s already fragile support quickly began to evaporate.

Over an extraordinary 24-hour period, from Tuesday night through Wednesday evening, nearly 40 ministers, including Johnson’s chancellor, Rishi Sunak, and his health secretary (and former chancellor), Sajid Javid, resigned. By breakfast time on Thursday, another 14 had called it a day.

Wednesday afternoon, in what must count as one of the most brutal Parliamentary Question Times in U.K. history, Johnson was subjected to hours of unrelenting questions, many of them from members of his own party. Time and again, MPs called on him to resign, and time and again he refused, shouting at, berating, insulting his colleagues and promising — perhaps more to himself than to anyone else — that he would finish the job he had been elected to do. It was a stunningly truculent, albeit entertaining, performance. As he dug in, the questions got angrier. “Was there any circumstance that he could imagine in which he would resign?” one of his Conservative colleagues angrily asked. Johnson, almost visibly wincing, sidestepped the query.

Johnson’s demise presents a rare opportunity for a … rejection of the demagoguery, the scapegoating, the corruption and ultimately the sheer ineptitude of his years in office.

After Question Time ended, Javid, his longtime friend and colleague, dug in the knife, making a deeply personal appeal to integrity and honor and public service in explaining to the House of Commons why he felt he could no longer stay in Johnson’s cabinet, and publicly appealing to others of good conscience in the cabinet to force Johnson’s hand by resigning en masse.

Throughout that afternoon and evening, and into Thursday morning, the machinations, the plotting and the counter-plotting continued. Every few minutes, the bottom of the BBC’s television news feed updated the numbers of ministers who had resigned; the number of backbench MPs who were saying they no longer had confidence in Johnson’s leadership; the number of senior cabinet ministers — including his newly appointed chancellor, and his home secretary — who were either publicly or privately telling Johnson he had no choice but to resign.

And still the resignation didn’t come. Instead, Johnson dug in. Over the phone, he fired Michael Gove, one of his top cabinet ministers and an erstwhile loyalist who late Wednesday afternoon had told the prime minister it was time for him to go; Gove was, “Downing Street sources” told the media, a “snake.” The beleaguered prime minister announced once again that he had a mandate and wouldn’t let himself be removed from office, even as, practically by the minute, more of his erstwhile colleagues resigned.

Johnson may not literally have grabbed the steering wheel of his Secret Service-driven car, as Trump reportedly did on January 6; he may not have literally cried out, “I’m the fucking prime minister,” in the way that Trump shrieked, “I’m the fucking president” while trying to convince his driver to drive him to the Capitol where his mob was attempting to stop the peaceful transition of power and lynch Vice President Mike Pence. But for all intents and purposes, Johnson’s undignified actions and his refusal to accept that the political jig was up, were similar. This is a man who thinks that he is the sun around which the world revolves. And, even though his power derives from the parliamentary system, and, in particular, from the Conservative MPs who make up his parliamentary majority, he seemed to have decided that, come hell or high water, he wouldn’t leave office simply because he no longer had majority support even within his own party.

By early Thursday morning, his stubborn clinging to power had become a constitutional crisis. And by the start of the business day, it had become entirely untenable. So many ministers were resigning around him that he no longer had a functional government to preside over. Eventually, begrudgingly, Johnson bowed to the inevitable and announced that he would be leaving Downing Street.

Will this tale of corruption and malfeasance yield a new era for the U.K.? Does the widespread condemnation of Johnson’s ways open the door for a wildly different — even opposite — set of political priorities? Possibly, but only up to a point. The unique confluence of corruption, demagoguery and charisma that Johnson channeled will no longer hold such sway; but the damage done by his opportunistic methods of governance, the chaos unleashed by a hard Brexit, and the distrust that he promoted of democratic institutions and customs, will likely scar the British political landscape for years to come.

Sasha Abramsky is a freelance journalist and a part-time lecturer at the University of California at Davis. His work has appeared in numerous publications, including The Nation, The Atlantic Monthly, New York Magazine, The Village Voice and Rolling Stone. He also writes a weekly political column. Originally from England, with a bachelor’s in politics, philosophy and economics from Oxford University and a master’s degree from the Columbia University Graduate School of Journalism, he now lives in Sacramento, California.