My Nephew Voted for Trump, And Will Do It Again, Here’s Why

You Are Here: Home » Commentaries/Opinions » My Nephew Voted for Trump, And Will Do It Again, Here’s Why 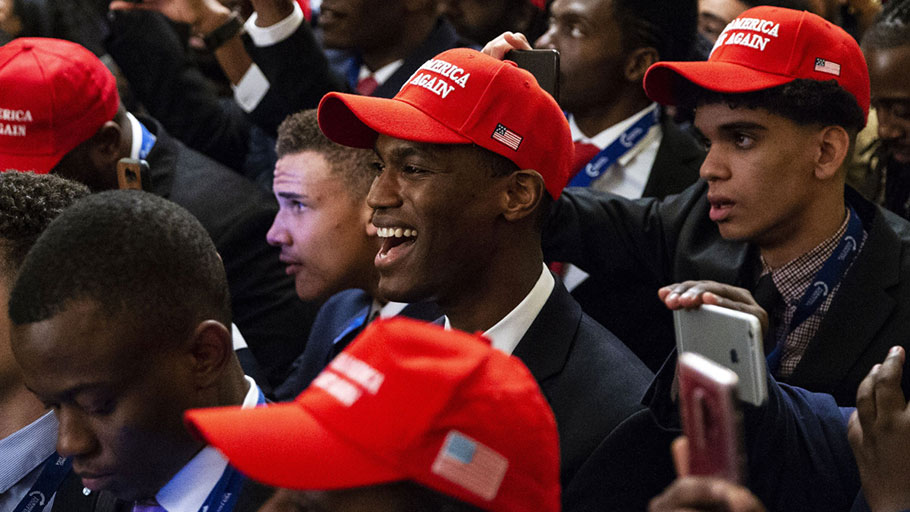 It was another raucous moment at the family Christmas dinner table when I asked my nephew this question. “You voted for Trump in 2016. Will you vote for him again?” He quickly blurted “Four more years.” That ignited the barrage of whys, how could you, and are you off your rocker, again from other family members. He was unfazed by the assault. He rebutted with pretty much the same warmed off quips he countered with in 2016. He didn’t like what he saw of the Democratic presidential candidates. In 2016, the candidate he blew off was Hillary. The Democrats hadn’t done a darn thing for Blacks worth mentioning. And Trump created more jobs for Blacks and freed a flock of incarcerated Blacks.

These were the same shop-worn talking points that we’d heard a million times, out of a million Trump and GOP mouths. But they weren’t the only ones. I’ve heard them out of the mouths of a lot more African Americans like my nephew than we care to admit. They’re almost always hit with a blitz of name calling, putdowns, bashes, harangues, interspersed with every attempt under the sun to tick off the colossal damage done and peril to Blacks Trump poses. The verbal hector and arguments didn’t move my nephew and it doesn’t move the untold number of other Blacks who see something of value in Trump.

Trump spotted this tiny, and very dangerous, opening early on. He repeatedly bragged that there were a lot of Blacks that liked him and supported him. Every chance he got he drove that seemingly loopy notion home with a litany of well-placed photo-ops and meetings with a handful of high-profile Black entertainers, athletes, and preachers. He doubled down on this with the launch of a rump group in Atlanta in November 2019 Black Voices for Trump. This would not get an ounce of attention, let alone work, without my nephew, and other Blacks like him mouthing support.

They translated into some real numbers that had some significance for the 2016 election. The 8 percent of the Black vote he got factored out to roughly a half million votes. This topped the total that GOP presidential contenders Romney in 2012 and McCain in 2008 got. Another 4 percent of black voters did not support Democratic rival Clinton. This factored out together to over 1 million Black votes lost to Clinton and contributed mightily to the narrow margin of victory Trump got in the five states that decide the White House. This raised eyebrows then and should raise them again in 2020.

The name calling doesn’t explain why they played into Trump’s hands and why they could again. Trump touched a tiny nerve with his shout that poor, underserved Black neighborhoods are supposedly a mess with lousy public schools, high crime and violence, and chronic joblessness and poverty. He dumped the blame for that squarely on the Democrats who run and have run most of these cities for decades. His carefully choreographed appearances with high-profile Black preachers at name black churches was just enough to take the hard and sharp edge for some Blacks off the almost-set-in-stone image of Trump as a guy with a white sheet under his suit.

There’s more. As far back as the 2004 presidential election, there was a sign that more than a few Blacks, most notably black conservative evangelicals, were deeply susceptible to GOP conservative pitches on some issues. A considerable number of them voted for Bush that year and that was enough to give him the cushion he needed to bag Ohio and win the White House. The same polls that election that showed black’s prime concern was with bread and butter issues—and that Bush’s rival Democrat rival John Kerry was viewed as the candidate who could deliver on those issues—also revealed that a sizable number of blacks ranked abortion, gay marriage and school prayer as priority issues. Their concern for these issues didn’t come anywhere close to that of white evangelicals, but it was still higher than that of the general voting public.

A pack of well-funded, and well-positioned Black GOP advocacy groups endlessly spew the Trump line in periodic ads and as talking heads on the news channels. Their message never varies. They hammer the Democrats for their alleged indifference to and outright aid and abet of Black suffering in the inner cities, and tout the GOP’s emphasis on small business, school choice, and family values as the best path to black advancement. This pitch has always had some appeal to many Blacks. These are the talking points parroted out by my nephew, almost verbatim.

Trump cannily tailors the few pitches he makes to Blacks for their votes to reflect this stock GOP pro-business, free enterprise, and the healthy economy line as something that Blacks also can and should embrace.

My nephew and the Blacks who voted for Trump, combined with the numbers who didn’t vote at all, or didn’t vote for Clinton, did help elect Trump. Their message was that a virulent, unabashed, GOP race baiting guy was a better bet in the Oval Office than any Democrat. Despite the eye rolling and head shaking in disgust at him, my nephew was one of those who sent that message. The mortal danger is he said he’ll send it again.

Earl Ofari Hutchinson is an author and political analyst. He is the author of the forthcoming Why the Electoral College Not You Elects Presidents (Amazon Kindle. He is a weekly co-host of the Al Sharpton Show on Radio One. He is the host of the weekly Hutchinson Report on KPFK 90.7 FM Los Angeles and the Pacifica Network.

The Thriving System of Convict Labor