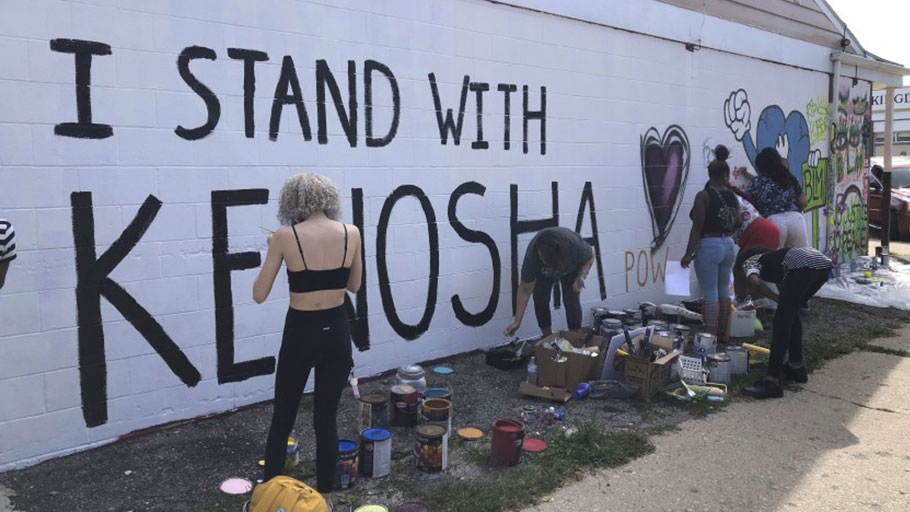 In the aftermath of the shooting of Jacob Blake by police, Joe Biden should have gotten to Kenosha, Wis., much faster. (Associated Press)

So, yes, Black voters were certainly important in 2016, and they’re going to be crucially important this year, too. But will they turn out? This is far from certain.

One thing we do know, however, is that Democrats shouldn’t assume anti-Trump sentiment among Black voters is enough, in and of itself. One tip-off was surveys of Black nonvoters conducted a couple of years after the 2016 election in a couple of cities in the swing states. By then, Trump’s support of white nationalists, his unwillingness to condemn police violence, his sledgehammer attacks on health, public education and housing programs were all well known. And those were all issues of particular importance to Black voters. Yet, many of the Black nonvoters still voiced no regret for having stayed home on election day.

Trump’s negatives just aren’t enough to move them. They need something affirmative. What did move them was what Obama had to say to Black voters in 2008 and 2012. They didn’t stampede to the polls for him solely because he was making history as the first African American president. They passionately believed there would be a tangible payoff for them in an Obama White House. On the campaign trail, he promised to push for jobs, raise the minimum wage, improve education, reform banks and other financial institutions to address the foreclosure crisis, repeal tax cuts for the rich and address, finally, American healthcare. Black voters believed Obama would bring real change to their lives, and they responded.

If Joe Biden wants to win back 2016’s sidelined Black voters, he needs to go into poor, underserved communities with something tangible in hand. He can’t simply be selling fear of the big, bad, racist currently in the White House. He has to tell inner-city Black voters what they will gain by casting their vote for him, and he needs to tell them that to their faces. That’s the only way to ignite the needed passion and fire.

Biden had a golden opportunity to make his case to Black voters in the immediate aftermath of the police shooting of Jacob Blake in Kenosha, Wis. Wisconsin is again very much in play in the presidential race, and Biden should have traveled there immediately to be a voice of support and a calming presence. In addition to meeting with Blake’s family, he could have toured the surrounding neighborhood, talked to residents about police reform and economic justice issues and laid out what he will do to push these things if elected.

Instead, Trump beat him to Kenosha, playing to his very different base with a law-and-order pitch. By the time Biden got to Kenosha a couple of days after Trump, the moment of urgency and maximum impact had passed. Yes, he met with the Blake family and talked about these issues. But it felt like an afterthought. Biden needs to establish a real presence in marginalized Black communities to stir any kind of passion among the many voters who feel the election process doesn’t mean a darn thing to them.

Biden also needs to fully and firmly address his past record on race — something the Trump campaign and its surrogates are sure to raise repeatedly during the campaign. He opposed busing. He made nice with hardcore segregation senators during his days in the Senate. He trashed Anita Hill during the Clarence Thomas confirmation hearings. He strongly supported the Clinton crime bill in 1994. For some black voters, his apologies won’t ever be enough. But he needs to keep working hard to remove the odor of these past racial sins.

Several polls have found that voter enthusiasm among younger Black voters could be particularly problematic for Biden. Since, as a group, they also strongly oppose Trump, Biden needs to give young black voters a reason to cast their ballots.

Trump will play hard on the old theme that the Democrats supposedly engage in “plantation politics” with Black voters. That is, they purportedly take Black votes for granted while offering little to nothing in return. He knows he’s unlikely to win many Black votes himself, but he’ll try to sow just enough doubt and disaffection to depress turnout among some skeptical Black voters, a strategy he used effectively in 2016.

Biden’s challenge is clear. What’s less clear is whether he’ll be able to meet it.

Earl Ofari Hutchinson is a political analyst and author of “What’s Right and Wrong With the Electoral College.” He is a weekly co-host of the “Al Sharpton Show” on Radio One and host of the weekly “Hutchinson Report” on KPFK-FM in Los Angeles and the Pacifica Network.