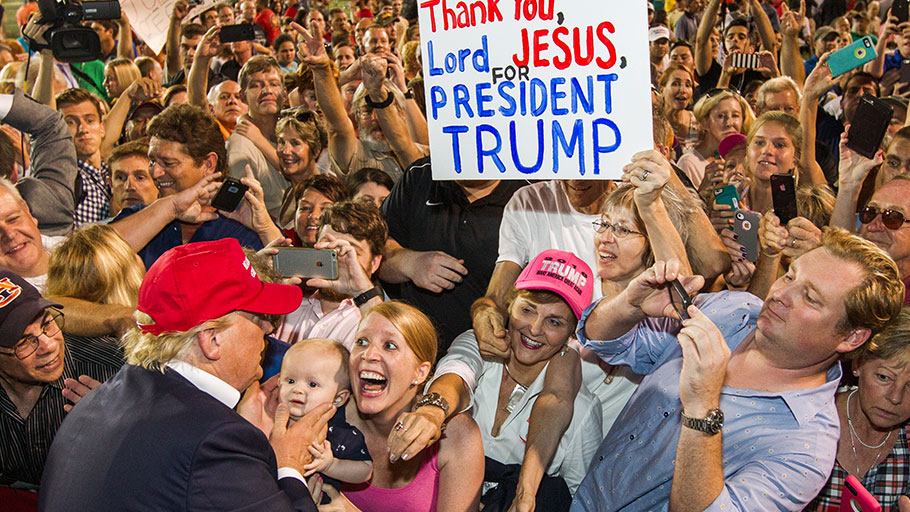 The Orange Man’s Approval Ratings — The Dangers of “Trumpism”

With all the vile acts that Donald Trump, “the orange man,” has committed and the barrage of media coverage of his egomaniacal behavior, you would think that his approval rating would be tanking.  But, that’s not the case. A recent CNN Poll showed Trump’s approval rating at 42%, up from 5-10% depending on which polls one chooses to cite.  Now 42% is nothing to brag about, and he has never cracked 50%.  Nonetheless, that 42% of the American people support the orange man is mystifying!

Trump’s litany of foul acts is legion. He recently signed a Defense Authorization Bill named after ailing Senator John McCain, while he was still alive, and refused to utter his name. At a rally the same day, he disparaged McCain for casting the vote that derailed the Republican effort to kill Obamacare. Trump can’t resist blurting out nasty comments about women. He recently called Rev. Omarosa Manigault-Newman, his former Communications Director turned vicious critic, a “dog.” The Orange man never passes up an opportunity to make broad-brush generalizations about immigrants from Mexico and Central America, characterizing them as “rapists” and “murderers.” He labeled Haiti and some African countries “s-hole” nations and continues to question the mental capacity of African Americans.  And, there’s more.

I can’t imagine any other President’s standing not being reduced to the point of resigning as a consequence of revelations from the likes of a Michael Cohen, Trump’s personal attorney, the felony convictions against Paul Manafort, his Campaign Chairman and other notables who “flipped” last week to corroborate the corruption in the White House.  His approval rating might slip some, but somewhere between 30% – 35% of the electorate appear to be bedrock, even cult-like devotees of Trump. This many people embracing the madness emanating from the White House is astounding and dangerous!

It is dangerous because of the elements and constituencies that comprise Trump’s “base;” a combustible caldron of Tea Party adherents, angry victims of economic dislocation, anti-immigrant xenophobia, racism, sexism, homophobia, islamophobia, white nationalism, opportunistic “conservatives” and ignorance. The orange man’s base has essentially seized control of the Republican Party and the traditional leaderships is terrified. Accordingly, it is dangerous when leaders of the Republican Party refuse to standup to a demagogue either because they fear his base or more importantly because he has been the vehicle for promoting reactionary, right-wing policies; an agenda which is antithetical to the interests of Black and Brown people, women, LBTQ persons, labor, poor and working people. And, he seeks to seal the deal by appointing rightwing judges that will provide the judicial sanction for this retrograde agenda well into the future.

There is a method to the madness. It is this agenda which is the essence of “Trumpism.”  It is dangerous because, due to racism, rampant phobias and ignorance, a mindboggling 30% – 35% of Americans have been mesmerized, persuaded to support policies and regulations that are clearly contrary to their interests. That such a large block of Americans openly support “Trumpism” is a “clear and present danger” to democracy and the quest to achieve a more perfect union in this country.

Herein lies the challenge to the liberal, left, progressive forces; we must mobilize in a life and death struggle for the soul of this nation.  There is no time for apathy, inaction and destructive dissension in the face of this grave danger. We urgently need a united front to confront and eradicate Trumpism and advance a visionary agenda for transformative change. Protests, disruption, civil disobedience, economic sanctions/boycotts and marching on ballot boxes with a sense of urgency, any and all legitimate means necessary must be employed to snuff out the danger of Trumpism as a pre-condition for creating the new America which must be born!