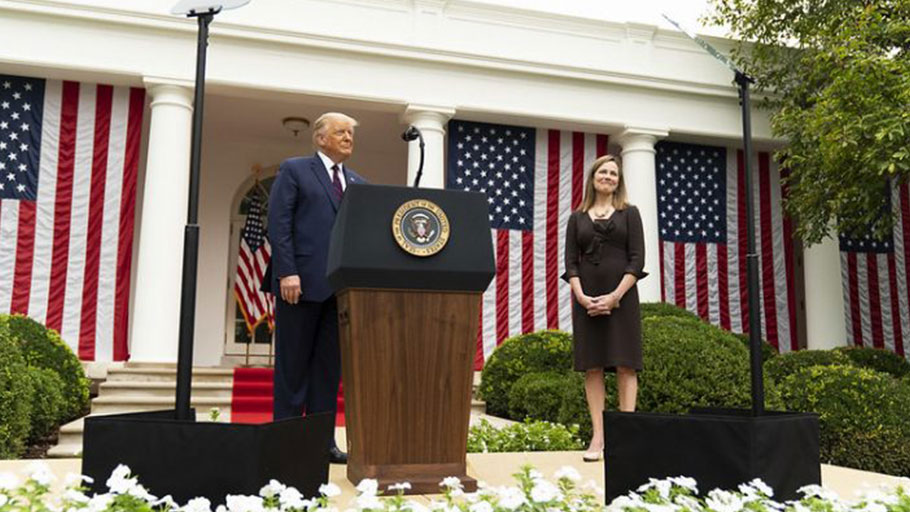 We cannot understand the current moment without viewing it with a historical lens. After the death of Justice Thurgood Marshall, there was a gaping hole in the U.S. Supreme Court. The court lost a defender of justice, and African Americans and people of color lost a champion for civil rights. History seems destined to repeat itself: Just as conservative Clarence Thomas replaced civil rights icon Thurgood Marshall on the Supreme Court, Amy Coney Barrett – a judge who once called herself a handmaid – is likely to replace Ruth Bader Ginsburg, a women’s rights icon. As an aside, it is hard for me to forget the frightening images of the haunting dystopian world depicted in “The Handmaid’s Tale.” It is even more evident that just as all “skin folk ain’t kinfolk,” it’s “all women folk ain’t feminist folk.”

If history has taught us anything, it is that progress is not eternal; it must be defended even after it has been wrought. Marshall’s ascension to the Supreme Court was no guarantee that the court would forever be home to persons of his social justice beliefs. His place on the high court was not an automatic welcome mat ensuring that racially conscious Black people would follow suit. Of course, we learned this lesson during Reconstruction. The few gains Black people experienced during that era were not etched in stone. And now – over 150 years later – we are still, in many instances, in the fight for our lives.

As we assess the current environment with its incessant threats to human and civil rights, it is critical we understand the history from which we sprang. We must be familiar with the movements that give us our current standing. We must thoroughly reject the hollow appearances of progress and demand sweeping change.

For instance, white supremacy has always relied on the facade of niceness. But veiled pleasantries often hide abhorrent truths. Despite Coney Barrett’s genteel demeanor during the rushed nomination process, the parading of her large and diverse family, and the pleasant things said about her, the watchdog group Accountable.US has accused Coney Barrett of “unconscionable cruelty.” She was part of a three-person district court that reversed a decision that awarded a pregnant teen $6.7 million dollars after a prison guard in Milwaukee County repeatedly raped her. The party that is anti-reproductive rights, anti-women’s empowerment, and impotent on gender inequities would never nominate a woman committed to said rights. Rather, it will select candidates with the veneer of womanhood but who are devoted to reversing progressive landmark rulings. The party will select someone who appears to have the capacity to be fair but who is vested in the preservation of white supremacy.

Coney Barrett’s affiliation with a group that called its women “handmaids” is particularly telling. I know from personal experience that women in general and Black women, in particular, must negotiate every aspect of their professional careers – determining when to raise their voices, when to go along to get along and when to push back. That Coney Barrett belonged to a group where women were groomed and expected to have no voice other than that prescribed by men is telling. If nothing more, it should inform our view of how she may rule on the bench. It should also foreshadow acquiescence to a political regime that looks more like fascism than democracy.

And so now, the question before us is whether Coney Barrett is a handmaid or heroine. Is she someone who will advance human rights or reverse the clock on decades of progress? Based on her history, we have reason to be cautious.

Nearly 30 years ago, while working for a women’s rights group, I organized one of the first public events to oppose Thomas’ nomination to the U.S. Supreme Court. Although the gathering occurred just under two months before Professor Anita Hill’s sexual harassment allegations publicly surfaced in early October 1991, it was clear to me and others that his civil rights record would be antithetical to that of his predecessor on the court. Indeed, in this current moment, it was strategic to President Trump, as it was yesteryear to President Bush, that Coney Barrett as a woman candidate – just as Thomas as an African American candidate – would appeal to those calling for gender and race representation on the court, despite their controversial stances.

But it is not just women and gender issues at stake. The Leadership Conference on Civil and Human Rights, with the endorsement from over 168 organizations, has outlined a plethora of grave reasons why Coney Barrett’s confirmation to the U.S. Supreme Court must be opposed, including her hostility to health care access; rulings against victims of employment discrimination; and rulings against criminal justice, immigrant justice, and gun safety.

The bottom line: Will a heroine of justice join the highest court in the land, or are we relegated to an accomplished handmaiden who has been trained to march in lockstep with conservative patriarchy? This is the only question that matters, and sadly, we know the answer. Coney Barrett will be harmful to all that we hold dear.

Editor’s Note: This article was originally published by The Source Magazine on October 26, 2020. Nkechi Taifa, Esq. is a member of the National African American Reparations Commission (NAARC), the convener of the Justice Roundtable and author of “Black Power, Black Lawyer: My Audacious Quest for Justice.”