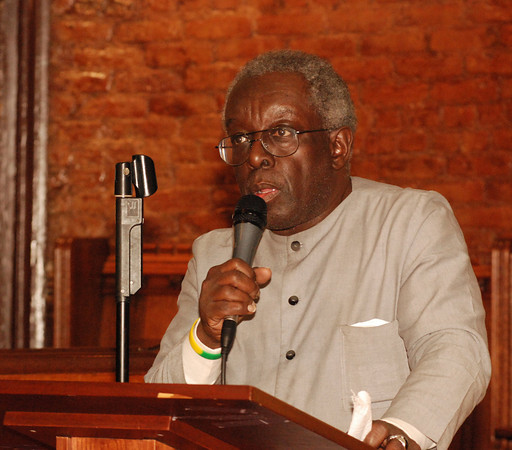 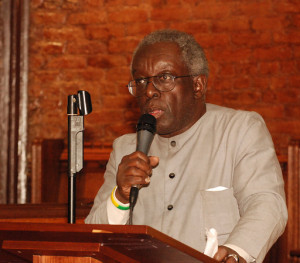 On the very day his friends and comrades were celebrating the birthday of Malcolm X (El Hajj Malik El Shabazz), Elombe Brath was joining his fellow revolutionary on the other side of our struggle.  Brath, 77, made his transition Monday, May 19 at the Amsterdam Nursing Home, according to his son, Cinque.

Brath had been at the nursing home for several years after a series strokes limited his ability to function in the capacity that had made him a legendary freedom fighter of international acclaim.

While our struggle for total liberation could have used his wise counsel and unwavering commitment to civil and human rights, his legacy was established years ago; his Pan-African and Black Nationalist credentials are impeccable and his devotion to African liberation sealed with the founding of the Patrice Lumumba Coalition over which he presided with eloquence and peerless self-determination.

Last May, a tribute to Brath in Harlem recounted his impressive resume of activism; a proclamation touched on a few of his accomplishments, some of the milestones of his extraordinarily productive life.  It highlighted his outspoken and courageous voice for the world’s oppressed communities and his intelligent grasp of the ideas and philosophies of Marcus Garvey and Carlos Cooks.

He was cited for his empowering message of Black consciousness; the creation, with his brother, Kwame and others, of AJASS (African Jazz-Arts Society and Studios) as well as the Grandassa Models out of which evolved the popularization of the concept “Black is Beautiful.”

Many remember when Nelson Mandela appeared in Harlem and how significantly involved Brath was in that historic moment in 1990.  There was no better image than to see him standing on the podium, side by side with Madiba.

Born September 30, 1936 in Brooklyn, Brath came of age in Harlem and in Hunt’s Point on Kelly Street.  He spent some of his early years in the Bronx and attended Morris High School where Colin Powell was also a classmate.  From the various ethnic groups, newsreels, and family discussions, he began the journey of world discovery, and from his father he inherited invaluable artistic gifts, some of which was visually displayed during his tenure at ABC-TV’s “Like It Is.”

From out of a cauldron of racism, cultural enlightenment, and particularly the music of such jazz greats as John Coltrane, Miles Davis, the literary genius of Amiri Baraka and others, Brath shaped his own social and political matrix that would take him directly back to his African roots.  He was still a teenager when he began to develop a comprehensive understanding of oppression and white supremacy and some strategies and tactics to minimize their deleterious effects on his people.  “We were a group of jazz lovers, artists, and activists who began producing jazz concerts featuring some of the greats of jazz who happened to be passing through town,” his brother Kwame Brathwaite recalled.  “This was back in 1956 and with Elombe at the forefront we were influenced by Carlos Cooks and the African Nationalist Pioneer Movement.  And we were deeply indebted to Max Roach and Abbey Lincoln, who inspired us with their art and political commitment.”

Some of the impressions shared at his 77th birthday salute and the subsequent tribute, are just as rewarding now that his spirit lingers with us.  Acclaimed artist Ademola Olugebefola, one of the founders of the Dwyer Cultural Center provided further artistic and political context for those intense wave of Black consciousness in the sixties.  “What Elombe and Kwame and others in their organization set in motion was a number of artistic and political associations, including Weusi,” he said.  “Even this cultural center springs from those visionaries, and it’s taken us twenty years to put this center in place.  And where you are sitting is the result of what Elombe and Kwame started years ago.”

“You have to understand that Elombe and Kwame and the people around them were about self-respect and self-determination,” said Dr. Leonard Jeffries.  He summoned icons of the Haitian Revolution, the likes of Dessalines and Christophe, who should stand as inspiration for young people today as they continue the quest that Brath and his brother had envisioned.  “Elombe was always about family, always about the health and welfare of the African family, and that is something we must honor as we honor him.”

Renowned poet George Edward Tait has often expressed his love and appreciation for Brath, which he did so elegantly at the tribute. “Brooklyn & Bronx brainchild answering the be-bop beat of a Barbados Birdcall/Hipstrutting to Harlem homebase and headquarters/Student of streetspeaker seminars and stepladder symposiums/Becoming soldierstar of study and struggle/Becoming revolutionary renaissance revivalist…,” is the opening stanza of the poem in honor of his fallen friend and associate.

On that momentous occasion Lisa Noble, Gil Noble’s daughter, recalled that it was Brath who educated her father on Africa and facilitated the appearance of so many important revolutionaries to “Like It Is.”  One clip from the show had Brath with the late Ossie Davis as guests, as they reacted to the then visit of President Bush to Goree Island.

Noted broadcaster Bernard White told a couple of memorable stories about Brath but he really elicited laughter when he recounted how Brath’s children once hid his shoes to keep him home.  “Elombe was always on the move, and this was their way of trying to stop him and get him to rest,” he explained.

But now the great warrior can rest for the ages because he has, like Othello, done the state some service and they know it, and if they don’t all they have to do is to witness the coterie of young people who will gather for the memorials that are sure to come in his name and as a tribute to his selfless fight to liberate us all.

Along with a faithful cadre of activists and revolutionaries, Brath is survived by a host of loving relatives, including his wife, Helene Nomsa Brath; brothers John and Kwame Brathwaite and their wives, Jacqueline and Sikolo, respectively; his daughter, Amber Nzingha Lyons; his sons, Mgavi Elombe, Rameses, Cinque, Segun, Seku Akwesi, and Mandella; grandchildren, Naqwana, Janelle, Emmanuel, Elombe Miles, Ramaya, and Asani Amiri.