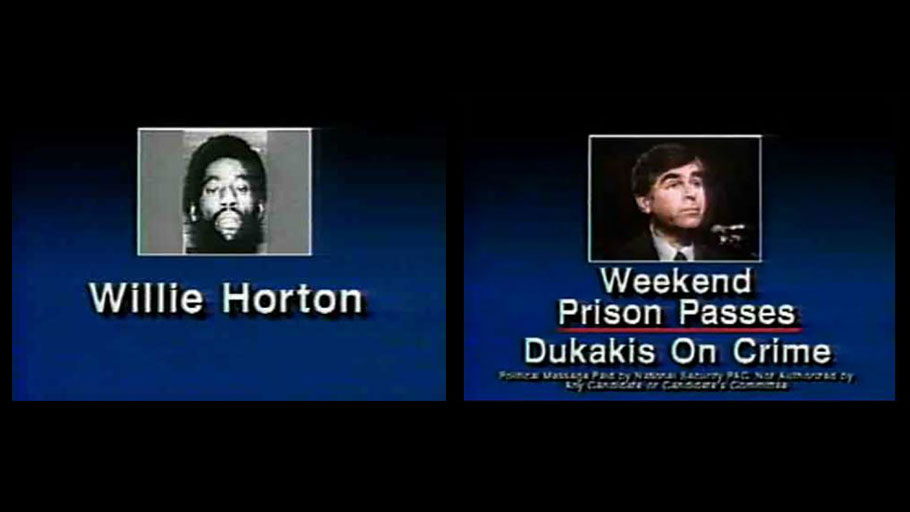 “Maybe he will put this Willie Horton on the ticket”. Lee Atwater, George Bush Sr’s 1988 presidential campaign manager wasn’t being totally facetious when he made this crack to a confidant. Horton was the black convict who escaped from a Massachusetts pen while on a work furlough. While on the lam, Horton raped a Maryland housewife.

At the time, Bush was in what appeared to be a losing battle for the presidency with Massachusetts governor George Dukakis, who then had a bulging 17-point lead on him in the polls. Enter Horton. With the campaign’s tacit sanction, a desperate Bush, looped ads that smeared Horton’s mug across them and blamed his escape and crime on the Democrats and Dukakis. This played on the not so subtle terror that black murderers were on the loose and posed a grave threat to whites. That wasn’t all. Maryland’s Republican Party chairman took the cue and drove the Dukakis-Horton connection home by sending out a letter labeling it ”the Dukakis/Willie Horton team.”

The fear mongering ad and letter by Bush’s GOP operatives alone didn’t cost Dukakis the election. But it played a big part in whittling away his big poll lead numbers. Better still for Bush, it firmly planted the notion that Dukakis, and the Democrats were soft on crime and criminals.

While Horton was not literally on the Bush ticket that campaign, what he represented, the perennial nightmare fear of black crime, was. That was more than enough to do the trick for Bush and the GOP.

This would not be the last time that the GOP pulled the Horton stunt against Democrats. There have been countless variations on this in campaigns in the years since 1988. In every case the offender playing on the hysteria card over black crime has been a GOP candidate latching on to that fear to terrorize white voters at the polls.

Trump had all the Horton ingredients in place to kick in the latest racist terror campaign. There’re the hourly news images of thousands of Central American migrants streaming through Mexico heading for the U.S. There’s the deep fear that illegal immigrants do pose a major threat to public safety and order. There’s the fact that by entering the U.S. illegally they are viewed as lawbreakers.

The handful of incidences where undocumented workers have robbed and murdered have been endlessly looped on new outlets. This has further fed into public mania that illegal immigrants are poised to commit waves of murder and mayhem in the country.

Trump’s ad playing hard on that terror is almost a carbon copy of the Horton ad. There’s the shot of an illegal immigrant,Luis Bracamontes, who committed a crime. He had been previously booted out of the country and returned and murdered two police officers. The ad quickly finger- points Democrats, “Democrats let him into our country. Democrats let him stay.”

As dirty as the Horton ad was, this is even dirtier. Though Bush Sr. winked and nodded at the Horton ad, it was not the direct product of his campaign. After an uproar from Democrats, the Bush campaign eventually disavowed it. Trump not only approved the ad in a web video but bragged about it in a tweet. This in effect puts the presidential stamp of approval on a scurrilous, false, and gutter ad.

Unlike Bush Sr., Trump is not in the political fight of his life for election. He’s wallowing in the political gutter, on the surface to help the handful of Republicans locked in a close fight for election. The goal ostensibly is to keep the GOP’s grip on the House and the Senate. The even more insidious reason for the fear mongering hate ad is that it fits in with Trump’s by now well-tailored ploy of using racial fear and hatred as his principal weapon to bludgeon Democrats and rev up his base. It’s also yet another test run for the racial mania that Trump will continue to unleash any and every chance he gets to tighten the racial division lines in the country.

Trump will not disavow his Hortonesque video. He will revel in it and do everything he can to make sure that its vile, racist message sinks in with enough fearful voters to prod them to the polls November 6 and beyond. It’s a Willie Horton moment that befits Trump.

Bad News From Brazil: The Right Populist President-Elect Will Be Absolutely Horrid on Drug Policy