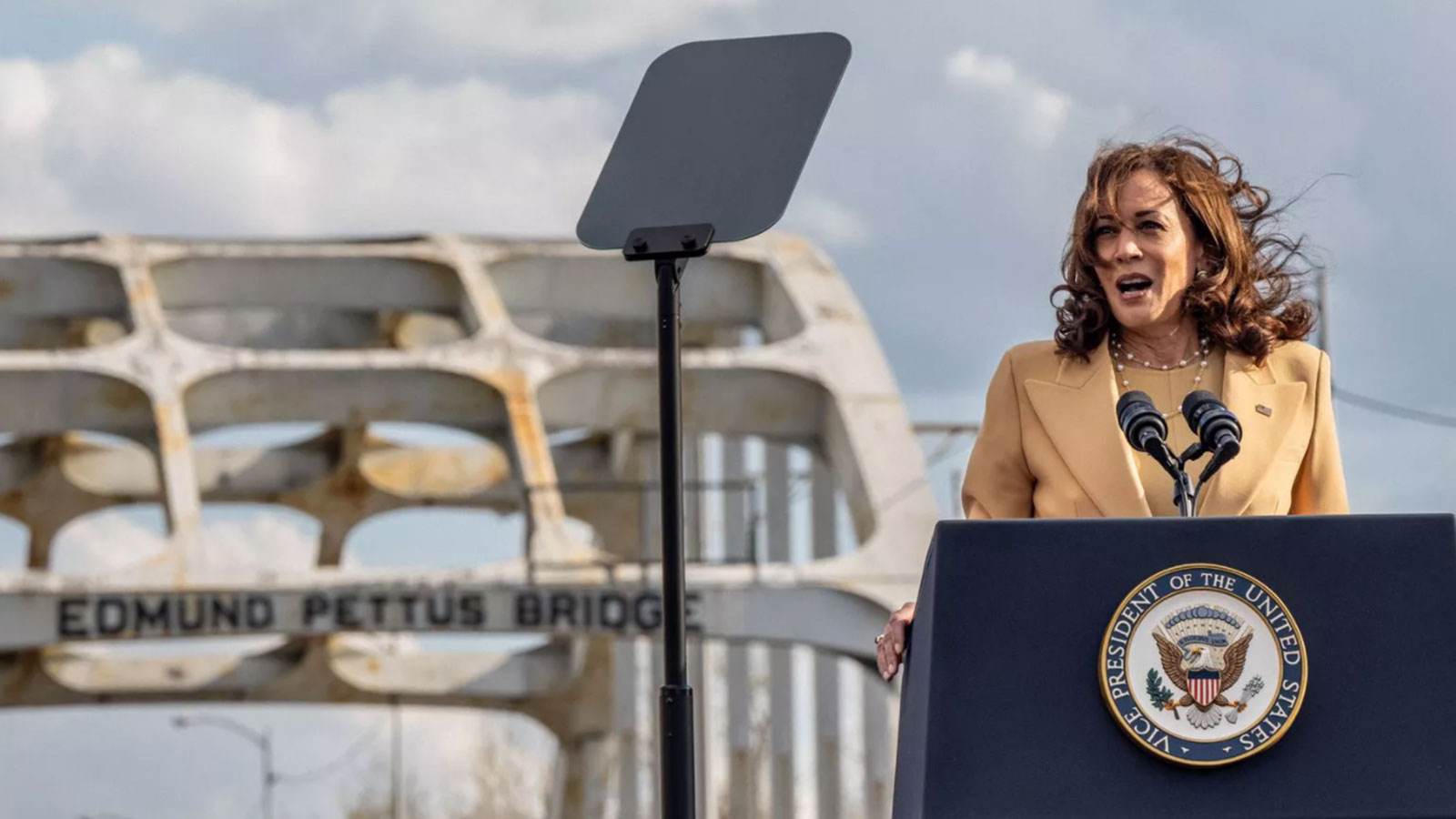 VP Harris champions voting rights on ‘Bloody Sunday’ anniversary: ‘We will not let setbacks stop us’

You Are Here: Home » Blog » Editors' Choice » VP Harris champions voting rights on ‘Bloody Sunday’ anniversary: ‘We will not let setbacks stop us’

Voting rights and Black America’s historical fight for equality was front and center on Sunday as Vice President Kamala Harris, White House officials, members of Congress, community leaders, and activists convened in Selma, Alabama on the anniversary of the Selma to Montgomery marches of 1965.

Observing the 57th anniversary of “Bloody Sunday,” a day when hundreds of voting rights protesters were nearly beaten to death by white state troopers on the Edmund Pettus Bridge, Washington’s highest-ranking government officials and others gathered to commemorate the demonstrators who risked their lives for the enfranchisement of African Americans.

“They knew that if they wanted true freedom, if they wanted to claim what was theirs by birth and by right, they had to march on this bridge. On that day, they were prepared for the worst. And on this bridge, on that day, the worst found them,” said Vice President Harris standing at a podium staged on Edmund Pettus Bridge. “Their peaceful protest was met with crushing violence.”

On March 7, 1965, about 600 civil rights activists led by the late U.S. Congressman John Lewis and others attempted to march from Selma to the state’s capital of Montgomery in protest of voting discrimination. When demonstrators marched along the bridge in Selma, they were tear-gassed and brutally beaten by officers.

If there were ever a moment when we could break the pattern of injustice that has plagued this country, that moment is now.

Let us honor the legacy of our civil rights heroes, on whose shoulders we stand, by seizing that opportunity. pic.twitter.com/a7u9OPBMV5

“Today, we’re still on the path to achieving the promise of equity and justice,” U.S. Education Secretary Miguel Cardona said to theGrio. “To achieve the promise of equity … to keep on in the tradition of Selma … to honor those who marched and fought—some who gave their lives for the cause of justice—we need to do a few important things. We must engage with communities of color, especially our parents and families and our young people. We must boldly address gaps in opportunity—including by continuing to protect the right to vote.”

Sunday’s event called attention to the reality that nearly six decades after the violent Selma to Montgomery marches, which ultimately led to the passage of the landmark Voting Rights Act of 1965, Black and minority voters in 2022 remain vulnerable to voter disenfranchisement since the U.S. Supreme Court gutted the law in separate cases in 2013 (Shelby v. Holder) and 2021 (Brnovich v. Democratic National Committee). 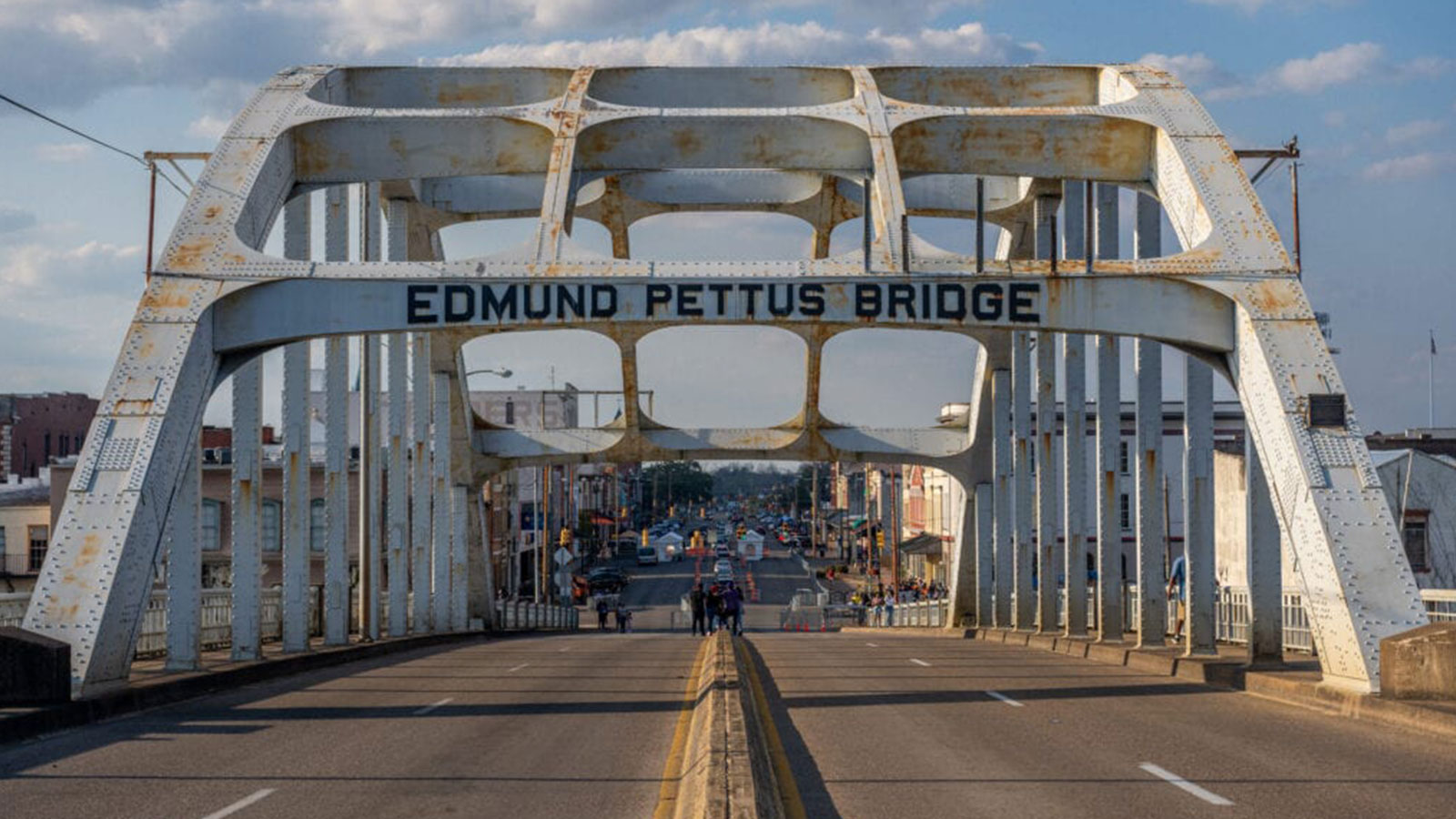 The Edmund Pettus Bridge is seen during commemorations for the 57th anniversary of Selma’s ‘Bloody Sunday’ on March 05, 2022 in Selma, Alabama. (Photo by Brandon Bell/Getty Images)

Since President Joe Biden and Vice President Harris won the 2020 election, dozens of restrictive voting laws have been passed in Republican-controlled states across the country, alarming Democratic elected officials, activists and community leaders who have for the past year pushed to pass federal votings rights legislation to restore the Voting Rights Act. So far, those bills have repeatedly been blocked by Republican members of Congress.

Vice President Harris said that in the past few months since the administration and Democrats last tried to pass the Freedom to Vote Act and John R. Lewis Voting Rights Advancement Act in January, she has traveled across the country to meet with faith and community leaders, students and activists to help “strengthen the freedom to vote.”

“People are tired and frustrated and at times scared, scared that we risk losing the rights we fought so hard to win. I believe at this moment we are faced with a choice, a choice that we have faced many times before. Do we stand, or do we fight?” said Harris, who reminded the crowd that it took the Selma demonstrators who were attacked on Bloody Sunday three attempts before they finally crossed the Edmund Pettus Bridge and marched to Montgomery. 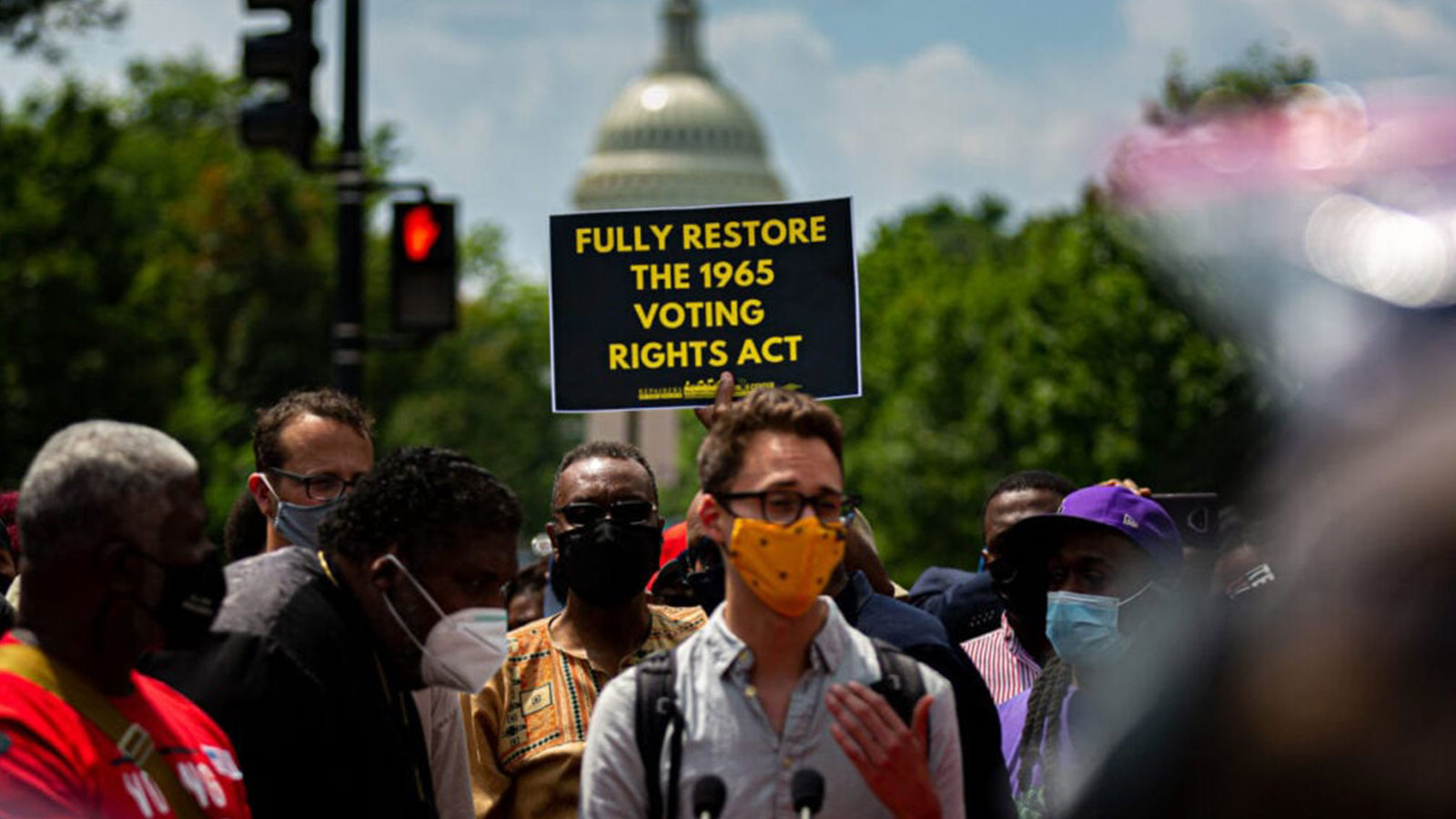 The Poor People’s Campaign rallied and marched in Washington DC, where faith leaders, low-wage workers, and poor people from around the country protested for the US Senate to end the filibuster, protect voting rights, and raise the federal minimum wage to $15 an hour. (Photo by Michael Nigro/Pacific Press/LightRocket via Getty Images)

“It took their resilience, their determination and their courage. And yes, it even took the protection of the National Guard and federal marshals in a moment of great uncertainty. Those marchers pressed forward, and they crossed. We must do the same. We must lock our arms and march forward. We will not let setbacks stop us.”

In order for Democrats to achieve their goal of restoring the Voting Rights Act of 1965, they will have to penetrate the giant Republican red wall in Congress. The slim majority Democrats hold in the U.S. Senate is not enough to pass federal voting rights legislation – not as long as the upper chamber of Congress’s filibuster rule remains in place and fellow Democratic Senators Joe Manchin of West Virginia and Krysten Sinema of Arizona refuse to eliminate or amend it.

In her remarks, Harris urged voters to “continue to push the Senate to not allow an arcane rule to deny us the sacred right.”

Rev. Dr. William J. Barber of the Poor People’s Campaign, who met with Vice President Harris on Sunday before her speech, has been leading demonstrations in West Virginia and Arizona in an attempt to pressure Manchin and Sinema to act on changing the filibuster in order to restore the Voting Rights Act.

Barber told theGrio that while action and leadership from the Biden-Harris administration are important, the real power and impact comes from the American people coming together to demand that the right to vote be protected. 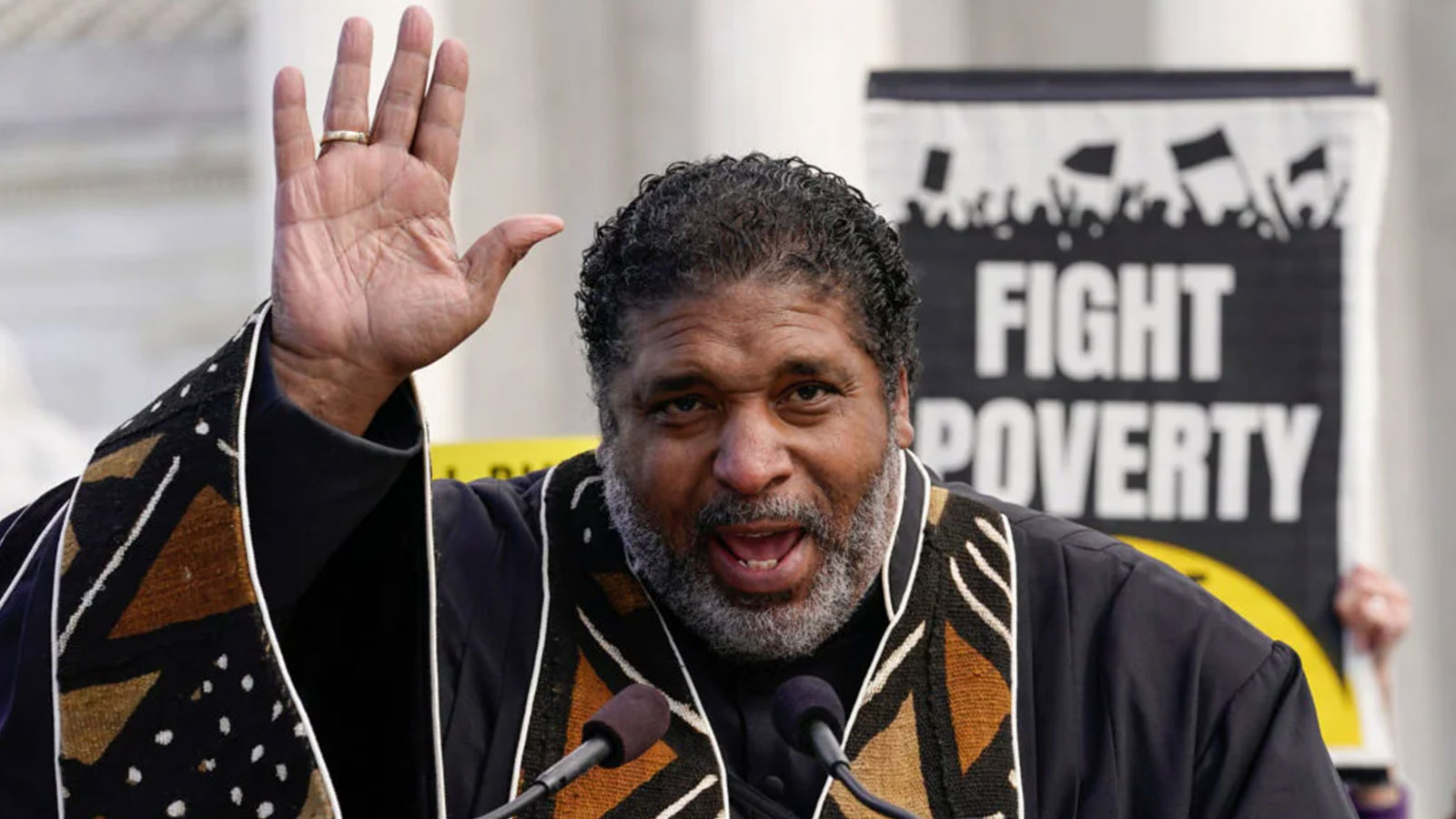 Reverend William Barber speaks during a demonstration at the U.S. Supreme Court during the MoveOn and Poor People’s Build Back Better Action on November 15, 2021 in Washington, DC. (Photo by Jemal Countess/Getty Images for MoveOn)

Gleaning from the past, Rev. Barber said “the fight for voting rights is never won from the top down — it’s always the bottom up.”

“We have to have a recommitment to the spirit of the lives of Black and Brown and diverse coalition of people or religious leaders who had decided that they would not accept less than what America had promised,” he told theGrio.

Barber did reserve some critique for the Biden-Harris White House and Congress, arguing that voting rights legislation should’ve never been separated from the administration’s larger Build Back Better legislative agenda. He wants the For the People Act, the bill before the Senator Manchin’s amendment changed it to Freedom to Vote Act, to be ”back on the table.” He also supports the other voting rights bill that is named after Rep. Lewis.

“It’s time for a full restoration of the Voting Rights Act…This is serious business. It’s not just about a party, not just about a president. It’s about the people and the entire trajectory of the American democracy for the next hundred years,” said Barber.

Rev. Barber also said that while today’s fight for voting rights protections is happening under the watch of President Biden, the weakening of the Voting Rights Act first began under the presidency of former President Barack Obama. It was then that there should have been a rallying cry to restore the landmark law from elected officials and activists, he said.

Congress has a tight window if they want to pass any kind of voting reform as the November midterm elections are months away. Democrats are in jeopardy of losing their slim majorities in the U.S. House and Senate and may not have full control of Congress for years to come. Considering what lies ahead, the issue of voting rights hangs in the balance.

In her closing remarks, Vice President Harris recalled the life and legacy of Congressman Lewis, whose family she met with, along with civil rights leaders, earlier in the day. The last time she was in Selma, she said, was when Lewis last stood on the Edmund Pettus Bridge for the anniversary of Bloody Sunday in 2020. 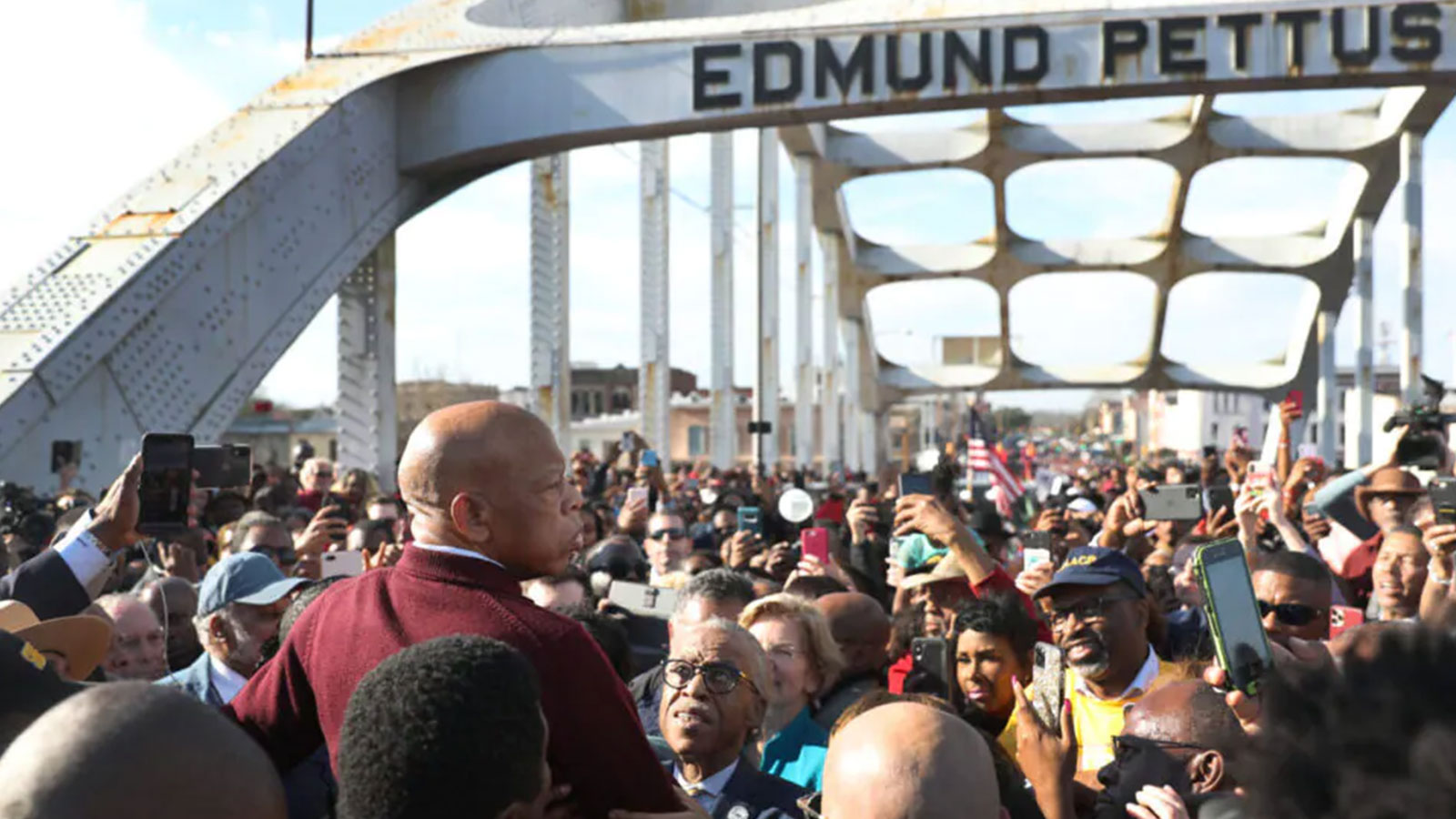 “John Lewis was the embodiment of strength and resilience, the epitome of dignity, grace and perseverance as he stood here that day. You could see the body that carried him across this bridge all those years ago had become fragile, but the spirit that carried him was as strong as ever,” said Harris. “He never gave up the fight. He returned to this bridge again and again and again. It is that clarity of purpose, that relentless dedication, that spirit, the spirit of Selma that we summon today.