Message from the President

In December of 2001, more than 2,500 people of African descent from the U.S., Africa, the Caribbean, Canada and Great Britain gathered in Atlanta for the first State of the Black World Conference. It was in Atlanta that the idea of creating a Black institute was born. April 27, 2002, on the occasion of my 60th birthday, an enthusiastic group of participants returned to Atlanta to formally launch the Institute of the Black World 21st Century as an African-centered, progressive, action-oriented think tank. The task of building IBW has not been easy. But, with the strong support of brothers and sisters in the greater New York area and around the nation, this Initiative has gradually gained traction. IBW became renowned for convening informative and inspirational forums at the historic House of the Lord Church and other venues. In addition, the New York Ujima Support Committee h.as sponsored cultural-political events like the Freedom Ride to Atlanta, Selma and Montgomery to commemorate the 40th Anniversary of the Voting Rights Act; a bus tour to the Blacks In Wax Museum in Baltimore; the play Wade In the Water, a dramatic presentation of the impact of Hurricane Katrina on New Orleans; and, major delegations to Haiti to support the world ‘s First Black Republic. IBW has also initiated the Pan African Unity Dialogue to build bonds of unity between Continental Africans, Caribbean Americans, Afro-Latinos and African Americans. With your support, the greater New York area emerged as a formidable base for IBW.

At the national level, an extensive network of supporters has enabled IBW to emerge as a trusted ve!licle promoting projects and initiatives which exemplify the values of collaboration, cooperation, operation unity and joint work: The Black Family Summit, Shirley Chisholm Presidential Accountability Commission, Damu Smith Leadership Development and Organizer Training Institute, Research Consortium and Haiti Support Project [visit the website www.ibw21.org for a description of these Initiatives]. In June of last year, IBW also joined the movement to reform the “criminal punishment” system in the U.S. by launching a campaign to end the “War on Drugs.” Current plans are to sponsor Town Hall Meetings in Pittsburgh, Baltimore and Washington, D.C. IBW is on the move!

Despite our progress over the past ten years, there is much work to be done to elevate IBW to the status of a more visible, viable and permanent engine for global Black Empowerment. That’s why we envision 2012, the 10th anniversary of IBW, as the year for Operation Break-Through- a concerted drive to mobilize human and material support to enhance IBW’s programmatic initiatives and solidify relationships with leaders, organizations and agencies in Black America and the Pan African World. In addition to local forums in New York, we plan to host events commemorating the 40th anniversary of the historic National Black Convention in Gary and the first African Liberation Day in Washington, D.C. All of the motion/movement in 2012 will lead into State of the Black World Conference Ill, November 16-20, in Washington, D.C. We hope to organize at least 200 people from New York to attend what we believe will be one of the most productive gatherings of people of African descent in the 21st Century. Our appeal to you is to lock arms with IBW in 2012 and help us make Operation Break-Through a total success! We look forward to seeing you February 4th at the National Black Theater. 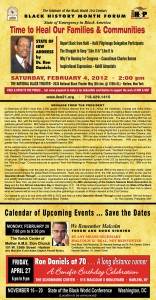