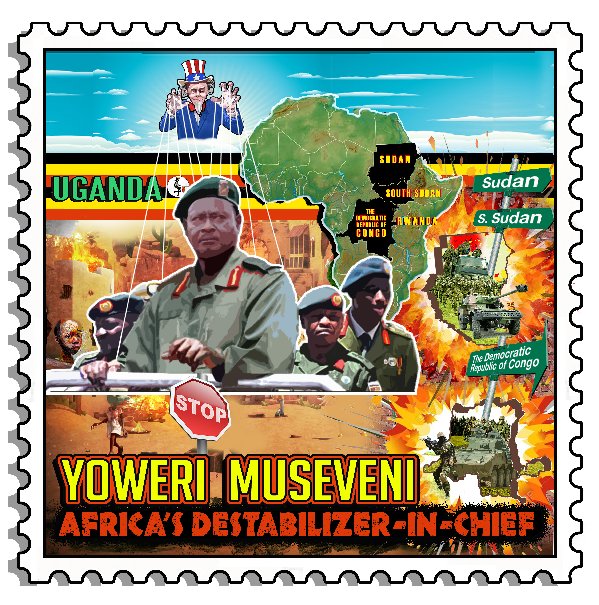 NEW YORK– A coalition of African and Diaspora African advocates for accountable government in Africa, affiliated with the Pan African Unity Dialogue, will launch the STOP MUSEVENI CAMPAIGN at a Press Conference Tuesday, September 19, 12:30 PM at the Dag Hammarskjold Plaza, East 47th Street near the U.N.  The group has labeled General Yoweri Museveni, President of Uganda, “Africa’s Destablizer-in-Chief” for his destructive interventions and meddling in the affairs of neighboring nations.  The launch is timed to coincide with General Museveni’s speech to the U.N. General Assembly.

General Museveni has either initiated or supported wars against Rwanda (1990), Congo (1997), and South Sudan (2013), directly or indirectly leading to the deaths of millions of Africans and the destruction of billions of dollars in property. In 2005 the International Court of Justice (ICJ) ordered Uganda to pay the Congo $10 billion in reparations for war crimes against Congo and launched an investigation into Museveni’s activities in the region. U.S. taxpayers are the primary underwriters of General Museveni’s regime. He receives $750 million annually in U.S. financial and military aid. The U.S. claims Museveni as an ally and it is widely believed that he operates with the tacit blessing of Washington.

The Stop Museveni Coalition has adopted a Preliminary Action Plan to educate the public and build a national/international movement to compel Museveni to stop his destructive behavior:

■ Demand an arms embargo against the government of Gen. Museveni to force him to withdraw Ugandan troops from South Sudan and to prevent him from escalating the war by supplying arms to President Salva Kiir as documented by a U.N. Report to the Security Council.

■ Demand that General Museveni abide by the recommendation of the United Nation’s Group of Experts’ Report to the Security Council supporting dialogue to resolve the conflict between the belligerents President Kiir and exiled Vice President Riek Machar.

■ Demand that the U.S. stop Museveni from arming the brutal M23 Congolese insurgents as documented in several U.N. Reports

■ Demand that the Museveni regime enter into negotiations with legitimate representatives of the Congo to settle the $10 billion (now approximately over $30 billion with interests and penalties) in reparations awarded to the Congo in 2005 by the International Court of Justice (ICJ) for war crimes by Uganda’s military in the Congo.

■ Demand a Commission of Inquiry to ascertain whether the U.S. blocked an International Criminal Court (ICC) investigation into alleged war crimes by Uganda’s military in the Congo which could have resulted in the possible indictment of Gen. Museveni.

■ Demand that the U.S. Review its $750 million in annual aid to Uganda to ensure that none of it goes to police and Army units utilized by Museveni to suppress internal dissent.

■ Demand that Museveni regime enter into dialogue with civil society leaders and the opposition leaders including Dr. Kizza Besigye, candidate in the 2016 disputed elections which Ugandan and international observers concluded were not free, fair or credible.

Under Milton Allimadi’s leadership, the Coalition plans to hold a series of education/public awareness events and utilize social media platforms to expose General Museveni’s destructive behavior and the role of the U.S. Government in supporting him. They hope to galvanize massive pressure to Stop Africa’s Destabilzer-in-Chief in order to give peace, justice and prosperity a chance to thrive in what is currently a very troubled region.

The Pan African Unity Dialogue (PAUD) is an umbrella organization of Continental African, Caribbean American, Afro-Latino and African American leaders and organizations committed to promoting Unity, Cooperation and Action among people of African descent in the U.S. PAUD is an Initiative of the Institute of the Black World 21st Century. www.ibw21.org