Press Releases / StatementsWar on the “War on Drugs” Posts

The War on the “War on Drugs” Day of Direct Action 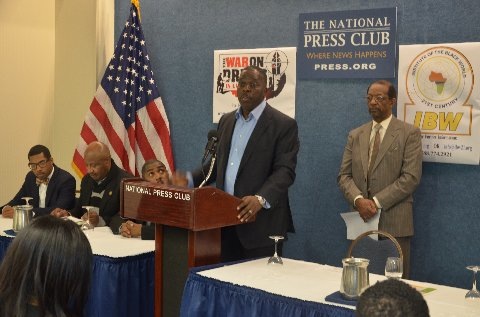 The War on the “War on Drugs” Day of Direct Action
Monday June 17, 2013 –The Anniversary of the War on Drugs

Against the backdrop of what the Institute of the Black World 21st Century believes is a State of Emergency in urban inner-city neighborhoods (the “dark ghettos”), we gather today on the occasion of the April 4, 1967 speech Beyond Vietnam: A Time to Break Silence delivered by Rev. Dr. Martin Luther King, Jr. at the Riverside Church,  and the memorial of his assassination one year later, to announce a  Day of Direct Action Monday, June 17th  to call upon President Barack Obama to End the War on Drugs and Mass Incarceration and Invest in America’s “Dark Ghettos!”  The Logo for IBW’s War on the “War on Drugs” Initiative graphically depicts what millions of Black people know to be the truth – “The War on Drugs is a War on Us.”  As outlined in a recent Vantage Point article [see press package], the War on Drugs is a racially biased policy/strategy, the “New Jim Crow,” which has disrupted and devastated Black communities across the country.  We have come today to proclaim that we have suffered long enough. It’s time to bring an end to an ill conceived and destructive policy/strategy.

But, ending the War on Drugs is not sufficient.  For far too long, this nation has ignored the myriad crises in urban inner-city neighborhoods, choosing instead to substitute paramilitary policing tactics like stop-and-frisk, tougher sentencing, and mass incarceration for social, economic and racial justice. The levels of joblessness, underemployment, inferior education, crime, violence and fratricide in America’s dark ghettos is unacceptable, a moral and political crisis which cries out for presidential leadership to promote the development of wholesome, sustainable communities.  Black people marched on ballot boxes in overwhelming numbers to ensure the re-election of President Obama.  Now it is time for the President to directly respond to the State of Emergency in America’s dark ghettos by having the audacity to end the War on Drugs and vigorously promote  investment in  jobs, economic and social programs to heal Black families and communities [see Vantage Point article in press packet].

Thus far, the response from the White House on these vital issues has been grossly insufficient. Therefore, those who marched on ballot boxes in the presidential election must march/assembly at the gates of the White House as “Drum Majors” for justice to underscore the urgent need for the President to decisively act on this issue. Accordingly, a dedicated network of social justice, drug and criminal justice reform advocates will conduct a Day of Direct Action June 17th on the occasion of the 42nd anniversary of the War on Drugs to call upon President Obama to act on the following agenda:

The Day of Action will be preceded by Father’s Day observances by the faith community/churches in the greater D.C./Baltimore areas to educate congregations and mobilize participants for the rally at Lafayette Park on the 17th.   In addition, faith leaders are also calling on incarcerated persons and their families from around the country to conduct a Father’s Day Fast in solidarity with the Day of Direct Action.  There have been enough studies, forums and conferences on these issues. It’s time for activists, advocates and organizers to take to the streets to call for an end to the War on Drugs and mass incarceration and demand investment in distressed communities in this nation!