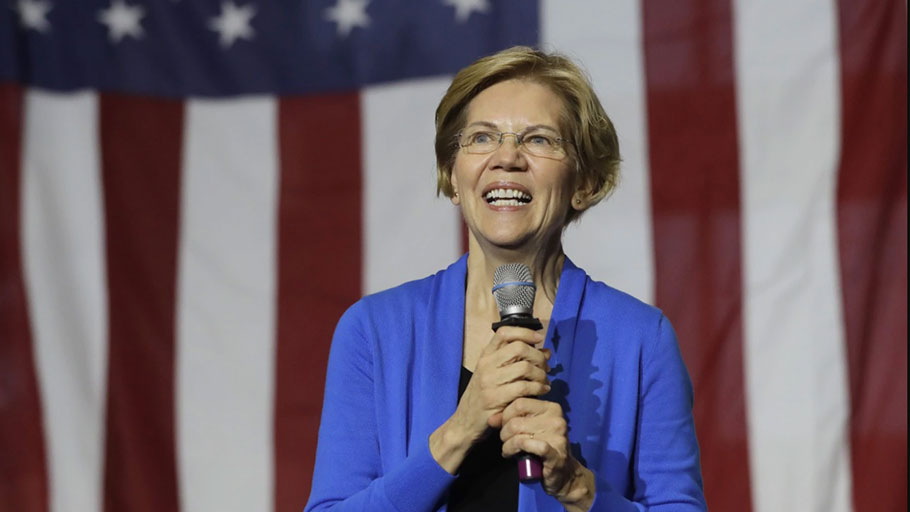 2020 will be a litmus test for capitalism

You Are Here: Home » Blog » Commentaries/Opinions » 2020 will be a litmus test for capitalism

The two most interesting questions in politics at the moment are whether Elizabeth Warren will be the Democratic candidate in 2020 and whether President Trump will still be around to duke it out with her.

Neither is certain, of course, but Warren’s ascendance already guarantees that the 2020 election will come down, as elections often do, to a fight between old and new. Or, in this case, between unbridled economic markets and a new more-regulated framework for capitalism.

More than her rivals, Warren has been outspoken and detailed about the need to break up any number of big companies that she claims are monopolies. Her candidacy is a challenge to the economic system, known as neoliberalism, that bred many of the ills that beset us today. Neoliberalism is an economic model that lowers trade barriers, deregulates capital markets and allows money to flow wherever it will — usually to where labor is cheapest. Over the past generation, both parties have given neoliberalism their support.

In fact, the system has underpinned the past 40 years or so of globalization. To be fair, it has lifted billions of people out of poverty, particularly overseas, mainly by opening global trade. As emerging markets have joined in the free-market system, a new global middle class has been born, and at a global level, inequality has decreased.

But it’s also allowed for huge inequalities within individual countries and created bigger and more damaging financial crises around the world. What happens in one economy affects what happens in another thousands of miles away. When capital can flow in and out of countries at will, financial speculation can imperil economies half a world away.

The two biggest beneficiaries of globalization since 2000 have been, research shows, China and big companies. China benefited from the inflow of global capital looking for cheap labor. This contributed to growth and rising wages there, particularly in the manufacturing sector, which suffered by comparison in many other countries. (As a state-run system, China could manage some of the downsides of globalization more easily, ring-fencing strategic sectors or limiting capital inflows when necessary.)

The other winners are big companies that, thanks to their global footprints, are able to fly miles over the problems — and the laws — of any particular nation. They can move jobs, capital and profits wherever they like, which allows them to leverage all the benefits of the current system, without dealing with the downsides — in the form of growing inequality, skill shortages or rising populism — with which nations themselves have to wrestle.

Tech companies have enjoyed this neoliberal benefit — only on steroids. If capital can flow more easily across borders than either labor or goods, data — which is Big Tech’s real currency — is like quicksilver: It moves even more freely. According to McKinsey Global Institute figures, about 80 percent of all corporate wealth is now living in 10 percent of companies, which are richest in data and intellectual property. Those assets can be located anywhere — which is why tech firms typically pay even less in taxes as a percentage of revenue than other types of multinational companies.

It’s no surprise that public trust in the elites who run such firms is at record lows. The anti-elite sentiment was a powerful driver in producing the phenomenon of Trump and remains potent, in the United States and overseas. And yet the tech giants seem oblivious to this fact. That’s partly because they came of age when the private sector was ascendant, when greed was good and when government showed little interest in regulation. Which might help explain why so many tech companies’ PR is tin-eared: They simply don’t remember a time when things were any different or have any idea of why they should be.

Warren is a logical tribune for this moment. She may have worked as a bankruptcy lawyer, but at heart, she’s an economic nationalist. Her policies would empower the public sector to redistribute some of the wealth hoarded by multinational companies in recent years to a broader group of stakeholders — labor, yes, but also small and midsize businesses and local communities. A Warren administration would likely push to in-source some supply chains and connect the dots between educators and job creators with new vocational programs. Her health-care plan, which might be a step too far for many Americans, at least has the intellectual coherency of her convictions — it’s a top-down, nationalized approach designed to give the entire population basic coverage.

Warren is not the only politician espousing a more-regulated capitalist system, one that would owe a lot, ironically, to what unfolded in the United States in the 1960s: a consciously regulated economy at the federal level. Sen. Marco Rubio (R-Fla.) has made similar-sounding suggestions, a sign that Republicans will try to go back to the future, too, whenever Trump departs the stage.

Over time, all manner of companies might be reined in — and in particularly the supranational tech firms that represent the apex of the old, neoliberal order. Their days as unregulated global behemoths — like those of the economic system that bred it — are numbered.