You Are Here: Home » Commentaries/Opinions » Against Civility 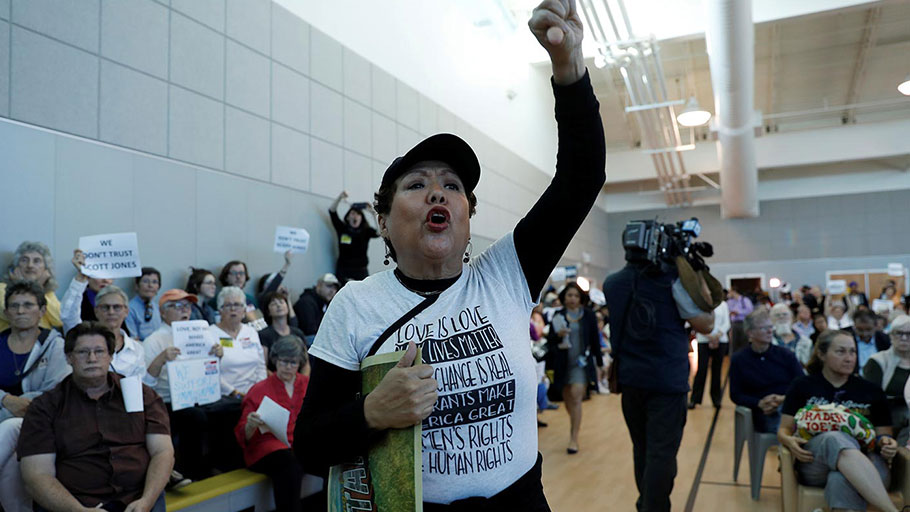 A woman protests at a town-hall meeting being held by Thomas Homan, acting director of enforcement for ICE, in Sacramento, California, March 28, 2017. (Reuters / Stephen Lam)

You can’t fight injustice with decorum.

By Sarah Leonard, The Nation —

Michelle Obama’s 2016 declaration that “when they go low, we go high” quickly became the unofficial motto of the anti-Trump resistance. But instead of being used against Trump himself, this attitude is now being wielded against protesters confronting his administration’s obscene immigration-detention policies. Even in the face of family separations, a racist travel ban, and overt, violent white nationalism supported by the upper echelons of this country’s government, pundits have clung to a seemingly indelible faith in decorum over moral clarity. That’s its own kind of terrifying.

In the past two weeks, figures ranging from right-wing ideologues to Democratic operatives have chided protesters in Washington, DC, for interrupting Department of Homeland Security Secretary Kirstjen Nielsen’s Mexican dinner. Twitter users have been kicked off the platform for sharing White House staffer Stephen Miller’s phone number. Waitstaff at the Red Hen restaurant in Virginia have been chastised for refusing service to Sarah Huckabee Sanders. The Washington Post’s editorial board wrote that blurring the public and private spheres isn’t a “healthy” development, and that “those who are insisting that we are in a special moment justifying incivility should think for a moment how many Americans might find their own special moment.” Even former Obama campaign manager David Axelrod has weighed in to agree.

This attitude reveals a poor understanding of how a “resistance” actually works. The original “resistance” was an international movement against Nazism that employed tactics inspired by guerrilla warfare. The Nazis, shall we say, went low; the resistance met them in the gutter to fight for their lives.

Nazi comparisons aren’t always perfect (except when they are), so let’s stay closer to home, and consider black resistance to white-supremacist terror in mid-century America instead. When black members of the civil-rights movement demanded to be treated equally by sitting in at lunch counters, blocking highways, and confronting public officials, they were labeled traitorous and impatient. The “be patient” attitude of white moderates famously prompted King’s “Letter From a Birmingham Jail” in which he wrote that “nonviolent direct action seeks to create such a crisis and foster such a tension that a community which has constantly refused to negotiate is forced to confront the issue.”

The actions we’re seeing around the country today have involved no violence–just mild discomfort. Still, civility enforcers like former education secretary Arne Duncan seem committed to taking the dumbest possible lesson from the civil-rights movement. “No matter how much we dislike or disagree with someone, we should not deny them the chance to have a meal,” Duncan tweeted. “The history in our country of denying people access to restaurants, to water fountains and even bathrooms is too raw, too real.” Does this, then, make the Kirstjen Nielsen the new face of the Student Non-violent Coordinating Committee? If you take from the civil-rights movement that denial of service is a slippery slope, you may have missed that the movement wasn’t about pancakes and coffee but about eradicating inequality upheld by armed white people.

Throughout history, activists have seldom won battles against injustice by asking politely. This notion is commonly understood in the abstract, or through clichés —“power concedes nothing without a demand,” “well-behaved women seldom make history”—yet people in power and in the media continue to act like nonviolent direct action borders on a Hobbesian war of all against all. This ethos betrays a fundamental misunderstanding of whom etiquette works for. Between equals, etiquette can be essential to productive collaboration and learning. But between the enormous power of the state and the average citizen, polite dialogue is a charade that props up power. Comforting the afflicted is a fine philosophy—but it doesn’t go far without afflicting the comfortable.

A popular and facile objection to “uncivil” action is that administration officials have the right to peace in their private lives: After all, the separation between the public and private spheres should allow for a liberal exchange of political views. But the people who’ve been denied service aren’t merely fellow citizens, or even longtime civil servants suddenly finding themselves in the clutches of a horrible boss. These are powerful political appointees and administration stalwarts who largely come from privileged backgrounds and have freely chosen to serve Trump and his agenda.

The people being targeted are adults living and working in a democratic society; facing consequences for their actions, as conservatives would agree, is what grown-ups should all do. It’s true that situations that call for inconveniencing officials should rise to a high threshold that’s not always easy to define. But separating men, women, and children into fenced-in… camps? Camps where people die unnecessary deaths? Perhaps this reeks of violent extremism, but for that, I’d interrupt Kirstjen’s breakfast, coffee, and cocktail hour, too.

Ethics aside, some critics, like David Axelrod, have pondered out loud whether these tactics are effective. “Kind of amazed and appalled by the number of folks on Left who applauded the expulsion of @PressSec and her family from a restaurant,” he tweeted. “This, in the end, is a triumph for @realDonaldTrump vision of America: Now we’re divided by red plates & blue plates! #sad.”

This is a fair question. No one likes to pointlessly expend energy for a lost cause. But there’s no evidence that this is the case. The enormous backlash against family separations, which included these high-visibility confrontations, has forced the administration half a step back. There’s no evidence that confronting the head of DHS at dinner is going to move people to the right. And we’re certainly not hearing any opposition from immigrants and immigrant advocates—those with the largest stake in the protests’ outcomes.

The president has said that immigrants will “infest” the United States and proceeded to separate their families and intern them. It is terrifying. It is #sad. But there can be no equivalence between this brutal wielding of power and the actions of activists who transgress dining norms in an effort to expose it.

To cling to civility is to allow the powerful to commit crimes, as long as they do so with a smile and a handshake.

Sarah Leonard is co-editor of The Future We Want: Radical Ideas for a New Century. She is a contributing editor to Dissent and The New Inquiry.

Trump’s Border Crisis Is Rooted in Fears of White Dispossession?

Trump’s Border Crisis Is Rooted in Fears of White Dispossession?
We Need Your Support — Donate, Share, Sign-Up Ways to Support