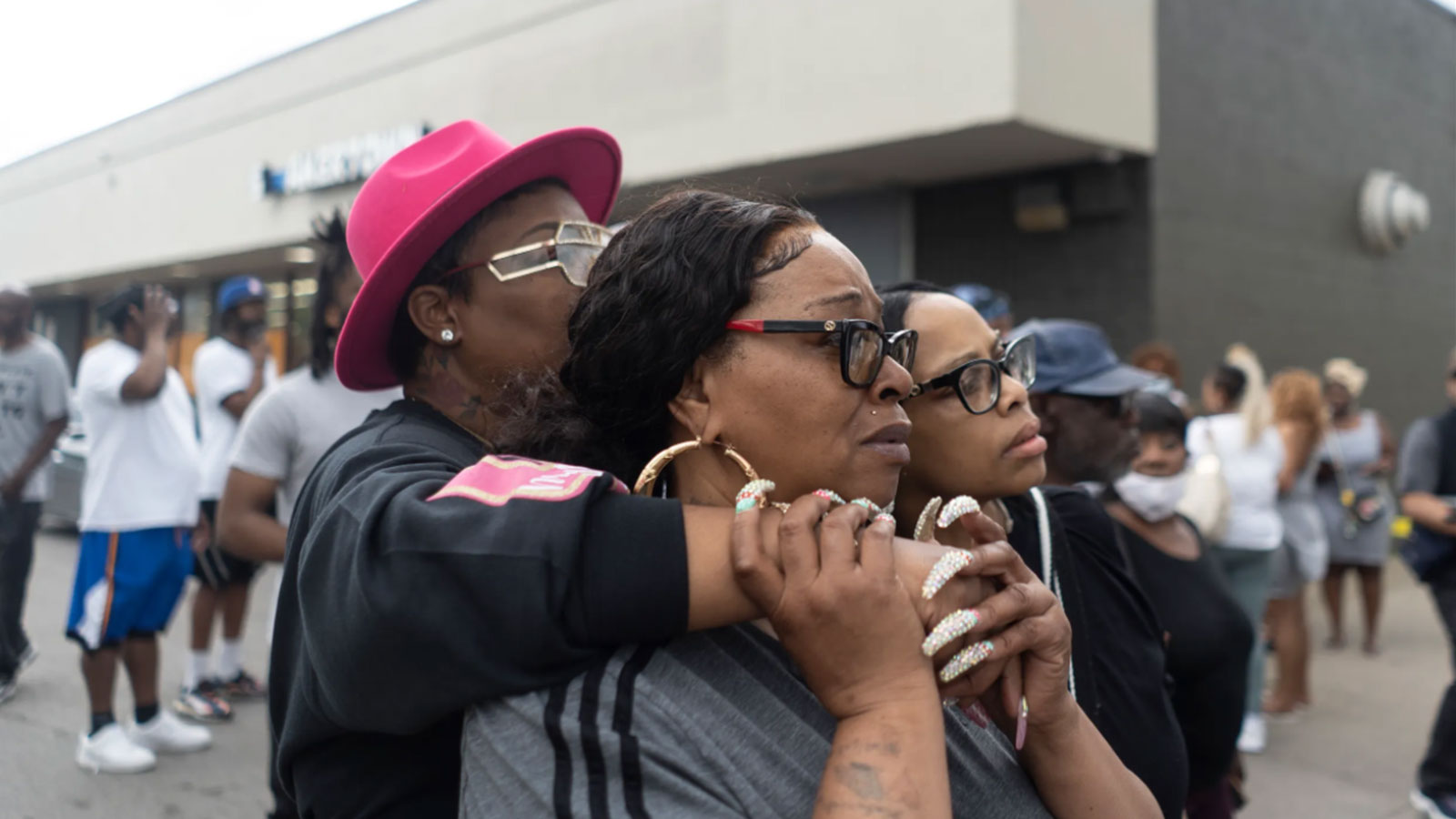 “This hateful, white nationalist rhetoric is not just being spread by lone gunmen. It can also be found on cable news and in the rhetoric of politicians today.”

Amid the outpouring of grief and heartache following Saturday’s massacre in Buffalo that left 10 people dead and three wounded, critical observers say the racial animus which evidence shows motivated the killer must be seen in the larger context of a white nationalist mindset that has increasingly broken into the mainstream of the right-wing political movement and Republican Party in recent years.

Taken into custody at the scene of the mass shooting at the Tops Market and identified as Payton Gendron, the white 18-year-old male charged with the murders of the victims live-streamed his attack online where he also posted a detailed, 180-page document that has been described by those who have reviewed it—including journalists and law enforcement—as a white nationalist manifesto rife with anti-Black racism, antisemitism, and conspiracy theories about “white replacement.”

According to local outlet News 4 in Buffalo:

The document, which News 4 has reviewed, plotted the attack in grotesque detail. The writer plotted his actions down to the minute, included diagrams of his path through the store and said he specifically targeted the Tops Markets location on Jefferson Avenue because its zip code has the highest percentage of Black people close enough to where he lives.

“This was pure evil,” said Erie County Sheriff John Garcia during a press conference on Saturday. The killings, he said, “was straight-up racially motivated hate crime from somebody outside of our community.”

A senior law enforcement official in Buffalo told NBC News that they were working to verify the document’s authenticity and confirm Gendron was behind it.

“We are aware of the manifesto allegedly written by the suspect and we’re working to definitively confirm that he is the author,” the official said.

NBC, which reviewed the document, reports:

The manifesto includes dozens of pages antisemitic and racist memes, repeatedly citing the racist “Great Replacement” conspiracy theory frequently pushed by white supremacists, which falsely alleges white people are being “replaced” in America as part of an elaborate Jewish conspiracy theory. Other memes use tropes and discredited data to denigrate the intelligence of non-white people.

In the manifesto, Gendron claims that he was radicalized on 4chan while he was “bored” at the beginning of the coronavirus pandemic in early 2020.

The document also claims “critical race theory,” a recent right-wing talking point that has come to generally encompass teaching about race in school, is part of a Jewish plot, and a reason to justify mass killings of Jews.

The manifesto also includes repeated references to another mass shooter motivated by racial hate, Brenton Tarrant, who in 2019 live-streamed his vicious Islamophobic assault on a mosque in Christ Church, New Zealand where he murdered 51 people and wounded dozens of others.

With these and other facts established about Gendron’s apparent motivations and ideology, many of those horrified by Saturday’s killings responded by saying the brutal and deadly attack in Buffalo cannot—and should not—be separated from the growing embrace of this kind of violent far-right nationalism that has increasingly found a home inside more mainstream institutions in the U.S., including right-wing media outlets like Fox News and a Republican Party enthralled by the xenophobia and fascist conspiracy theories of Donald Trump.

White supremacist nationalism is deadly and increasingly normalized by one of our political parties and a major TV network. Every true American must unite to speak truth, stop hate, and fight for justice.

My thoughts are with everyone in Buffalo who is grieving today. https://t.co/H6NG2yelP5

“We are horrified, heartbroken, and enraged at the news of the vicious attack on our neighbors and loved ones in Buffalo, New York,” said People’s Action, the progressive advocacy group, in a statement.

“This racist attack is a pure example of evil,” the group added. “It’s also the predictable result of the relentless onslaught of white nationalist and antisemitic conspiracy theories spewed from the far right, increasingly distributed by major corporate news outlets like Fox News and the extremist politicians their billionaire allies have cultivated.”

“In Christchurch, New Zealand and El Paso, Texas and Poway, California and now again in Buffalo, New York, a gunman motivated by a white nationalist conspiracy theory about invading immigrants shot and killed people of color,” said Sumayyah Waheed, senior policy council for Muslim Advocates, in a statement referencing a series of mass shootings carried out by white supremacists in recent years.

“Just like in Christchurch,” Waheed continued, “the alleged Buffalo shooter both posted a manifesto about the ‘great replacement’ conspiracy theory and also livestreamed his massacre on social media. Our hearts go out to the families of the victims and to the people of Buffalo.”

In a statement on Sunday, Kina Collins, a gun violence prevention advocate and Democratic congressional candidate running for Congress in Illinois’ 7th District, made similar arguments.

Calling the shooting a “devastating and sickening display of the racism, white supremacy, hate, and gun violence that plague this country,” Collins said, “Black people in Buffalo were targeted for no reason other than that they are Black.”

“This was an act of terrorism and it should be treated as such,” she added. “It is another reminder that white supremacy has and will always be America’s greatest threat. White supremacy has infiltrated our military and police departments. It was also on display on January 6th last year as insurrectionists, fueled by white supremacy, attacked our Capitol and threatened the lives of sitting members of Congress.”

Journalist Sam Sacks also made a connection between the Buffalo shooter and the “Big Lie” movement that drove the January 6 insurrection last year.

The forces that drove the Buffalo mass shooter are the same that drove reactionaries to storm the US Capitol on Jan. 6. These aren’t isolated incidents. They’re all part of the same political project, and it’s making gains.

Waheed in his statement said “This hateful, white nationalist rhetoric is not just being spread by lone gunmen.”

Such rherotic, he said, “can also be found on cable news and in the rhetoric of politicians today. On his cable news show, Tucker Carlson said that ‘the Democratic Party is trying to replace the current electorate, the voters now casting ballots, with new people, more obedient voters from the Third World.’ In campaign ads, Donald Trump described Latino immigrants as an ‘invasion.’ In a speech, Rep. Marjorie Taylor Greene called the election of Reps. Ilhan Omar and Rashida Tlaib ‘an Islamic invasion of our government.'”

I am devastated by the Buffalo shooting and grieve for victims and families.

But grief isn’t enough. Reports suggest the killer is a white supremacist. Domestic terrorism against Black and Brown communities has deep roots in our country. We must address it as the threat it is. https://t.co/70wVd0SFIE

With Republicans and major media personalities “normalizing white nationalist, anti-immigrant, anti-Black, anti-Latino, antisemitic and anti-Muslim conspiracy theories,” and gunmen like the one in Buffalo carrying out such attacks, Waheed said it is now “clear that white nationalism is the greatest threat to our nation’s security and we must hold everyone who spreads this hate accountable before anyone else is harmed.”

Source: Common Dreams
Featured image: People watch the crime scene of an active shooter across the street from the Tops Friendly Market on Jefferson Avenue and Riley Street in Buffalo on May 14, 2022. (Photo: Libby March for The Washington Post via Getty Images)