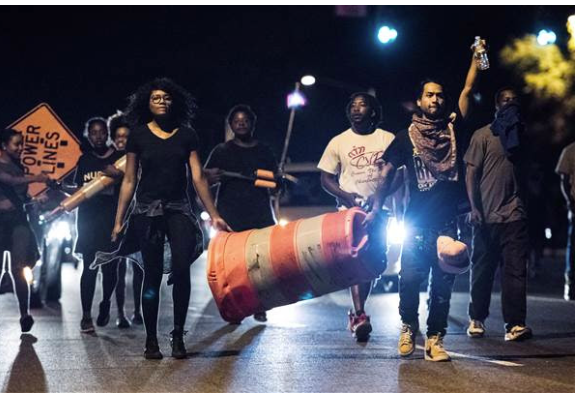 Charlotte Is Drowning In Systematic Injustice

You Are Here: Home » Blog » Commentaries/Opinions » Charlotte Is Drowning In Systematic Injustice

Just before 4pm, on Tuesday, September 20th, a Charlotte police officer shot and killed Keith Lamont Scott outside Scott’s parked car. Eyewitness and police reports do not agree on who the officer was, whether Scott was holding a book or a gun, or what took place between officers and Scott before the shooting.

There is much we do not know. But there is unrest in Charlotte because of what we do know.

We know, whatever the facts, that the law protects the officer, not the victim, in cases like this. Three years ago, a Charlotte officer shot and killedJonathan Ferrell, an unarmed black man who was asking for help after his car broke down.

The Movement for Black Lives led peaceful protests, and the state conference of the NAACP insisted on due process. The case ended in a hung jury. The attorney general’s office denied our request for a re-trial.

There is unrest in Charlotte because of what we know.

We know that the law, as written and enforced, cannot protect us from police violence. We know Darryl Hunt and Henry McCollum, two in a long list of African-American men wrongfully convicted in this state. We know our criminal justice system does not function to protect black life, but to control it.

We also know, since the Supreme Court upheld a lower court’s ruling on August 31st, thatGovernor Pat McCrory, former mayor of Charlotte, targeted African-Americans with “almost surgical precision” when he signed a 2013 voter suppression bill. When the highest court in the land declared the law intentionally racist, McCrory made no apology. His party’s chairman doubled-down by trying to use the state Board of Elections to limit the number of polling places in areas where African-Americans generally vote.

We know that, despite the fact that it would benefit more poor white people than African Americans, our legislature has refused to expand Medicaid under the Affordable Care Act, denying health insurance to the most vulnerable among us, simply because they don’t like a black man in the White House.

We know that, while 56 percent of African-American workers make less than a living wage, Governor McCrory signed the mean-spirited HB2, which not only writes discrimination into state law but also forbids municipalities from passing a living wage ordinance or even measures to protect children in the workplace.

We know that our legislature, while touting an average increase in teacher pay, reduced total funding for public education and supported policies designed to undercut schools like the one Keith Scott’s son was coming home from on the bus when he lost his daddy.

We know that they increasingly funnel public money to private academies, which lend themselves to the resegregation of public education, even though we know segregation hurts poor kids.

CHARLOTTE, NC – SEPTEMBER 21: Police and protesters carry a seriously wounded protester into the parking area of the the Omni Hotel during a march to protest the death of Keith Scott September 21, 2016 in Carolina. Scott, who was black, was shot and killed at an apartment complex near UNC Charlotte by police officers, who say they warned Scott to drop a gun he was allegedly holding. (Photo by Brian Blanco/Getty Images) Brian Blanco / Getty Images

True, there are things about the Scott case that we do not know. But it’s the injustices we do know—the facts on the ground that are choking the life out of black and brown communities—that created what we see in Charlotte this week.

Some say we must condemn the unrest in Charlotte. As a pastor and as an organizer, I do not condone violence. I suspect that much of it has been instigated by provocateurs with their own agenda. But to condemn the uprising in Charlotte would be to condemn a man for thrashing when someone is trying to drown him.

Whatever righteous indignation the public can muster ought to be directed toward the systems that created a situation where a man can drive to the bus stop to pick up his son and end up dead before he gets there.

I am a pastor. I will not condemn grief. But I was trained as a lifeguard, and I learned a long time ago that when people are drowning, their instincts can kill them and anyone who tries to help them. If a lifeguard can get to a drowning person, the first thing the lifeguard says is, “Stop struggling. Let me hold you up in this water, and we can get to the shore together.”

The riots in Charlotte are the predictable response of human beings who are drowning in systemic injustice. We must all pray that no one else gets hurt. But we must understand why this is happening.

Ta-Nahisi Coates writes: “A society that protects some people through a system of schools, government-backed home loans, and ancestral wealth but can only protect you with the club of criminal justice has either failed at enforcing its intentions or has succeeded at something much darker.” The unrest in Charlotte is not about black people hating police. It’s about black, white and brown people rising up against systems of injustice that shield officers who kill but leave millions defenseless.

As hopeless as the situation may seem, we also know what’s needed to change the conditions under which Keith Scott lived and died. Right here inNorth Carolina, we have seen how people impacted by unjust policies can come together in coalitions across color and lift up a moral agenda that embraces the good of the whole. Just last week, I was outside Pat McCrory’s office with clergy and the Fight for 15, with Black Lives Matter activists from Charlotte and education advocates, with healthcare workers and citizens fighting coal ash pollution. This coalition that came together in North Carolina’s Moral Mondays has spread to 30 states, uniting people who can elect new leadership and continue to push for a more perfect union in this nation.

Just last week, I was outside Pat McCrory’s office with clergy and the Fight for 15, with Black Lives Matter activists from Charlotte and education advocates, with healthcare workers and citizens fighting coal ash pollution. This coalition that came together in North Carolina’s Moral Mondays has spread to 30 states, uniting people who can elect new leadership and continue to push for a more perfect union in this nation.

This kind of coalition movement building is not easy, and we cannot win the change we need in a single election. But every step forward in this nation’s history has come from movements like this one. This week our decision is as clear as ever: it’s the ballot or the riot. We who believe in the possibility of democracy must mobilize to vote like never before.