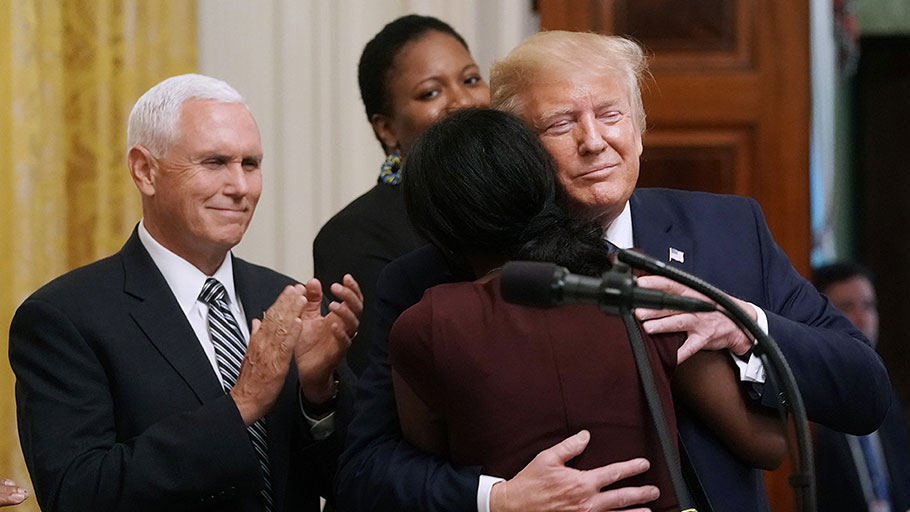 You Are Here: Home » Blog » Commentaries/Opinions » Despite Everything Biden Still Can’t Pry Some Blacks Loose from Trump

Since George Floyd was slain there have been ten national live voter polls taken. The polls predictably show that Biden has a whopping lead over Trump among Black voters. But they also show that a lot of Blacks still aren’t buying Biden. They’re buying Trump. There are just enough of them to raise the question why and to raise the worry that they could cause a problem in November.

First, there’s the why. Hands down, Trump has been the most racially divisive White House occupant in practically any times. He has made no secret that he will play to the hilt his biggest ace card, race baiting, to try to stay parked in the White House. He’ll unleash the barrage in the coming months. This alone should be more than enough to ensure Trump gets zero percent of the Black vote. He might come close to that except for Biden. He’s been dogged with all the old allegations about his supposedly checkered racial past.

His alleged racial sins are ticked off rote like. He opposed bussing. He snuggled up to hard-core segregation senators during his days in the Senate. He trashed Anita Hill during the Clarence Thomas confirmation hearings. He cheer led the Clinton crime bill in 1994. No matter how many mea culpas, apologies, and recants Joe does, and he’s done a lot of them, it isn’t enough to remove the odor of his alleged dubious past sins from the reflexive attacks from some against him.

Biden has several names on his short list and has said all the right things about each of the Black women mentioned as VP possibilities. But there’s the veiled threat that if he doesn’t pick a Black woman then some Blacks just might be tempted to stay home on Election Day. Here’s where there’s real danger. it wouldn’t take a lot to tip the election one way or another to Trump or Biden in the handful of states that will decide the White House. Trump won those states in 2016 by a minuscule number of votes. A drop off of a few thousand Democratic voters here and there would spell trouble. This is exactly what happened to Clinton in 2016 in those states, and she, of course, lost. And speaking of Clinton, in those near dozen post Floyd polls, Biden is seen less favorably by Blacks then was Clinton.

Biden’s slightly shaky image with some Blacks doesn’t totally explain the continued infatuation with Trump from some Blacks. Kanye West gives some clue as to why. He’s loudly reviled by most Blacks for his clownish, media attention grabbing, floor shows with Trump. Yet, some Blacks actually do back pat him for being wacky, but independent, and his own man when it comes to politics.

Trump also touches a sensitive nerve with his shout that poor, underserved black neighborhoods are supposedly a mess with lousy public schools, high crime and violence, and chronic joblessness and poverty. And he dumped the blame for that squarely on the Democrats who run and have run most of these cities for decades. He piles on to that with carefully choreographed appearances with people like West, and high-profile Black preachers, and celebrities.

Even with the Wests and them, there’s always been more than a few Blacks who have been deeply susceptible to GOP conservative pitches on some issues. A considerable number of them voted for Bush. And in the two presidential contests in 2008 and 2012 with Obama on the ticket, Republican presidential challengers, McCain, and Romney still managed to get a small percentage of Black votes.

The GOP has gotten some help on this score from a handful of Black GOP advocacy groups. They can be relied on to talk up the supposed virtues of the GOP to Blacks such as its emphasis on small business, school choice, and family values. There’s also the new wrinkle that Trump pre-COVID supposedly pushed Black joblessness to the lowest mark in decades and signed on to criminal justice reform capped by a rash of pardons of Black offenders. At the same, the GOP Black boosters blast the supposed “plantation politics” of the Democrats. That is, they purportedly take Black votes for granted while offering Blacks little to nothing in return.

In between his naked race baiting, Trump will weave this narrative into his pitch for a few Black votes. He can count and he knows that by sowing just enough doubt and stoking the disaffection with Biden among the Black critics. He might get lucky and cause some wavering among a few Blacks. Biden’s challenge is to make sure that he pry’s even more of the potential wavering Blacks away from Trump. When the race tightens up as it almost certainly will, he’ll need them.

Earl Ofari Hutchinson is an author and political analyst. He is the author of Why Black Lives Do Matter (Middle Passage Press. He is a weekly co-host of the Al Sharpton Show on Radio One. He is the host of the weekly Hutchinson Report on KPFK 90.7 FM Los Angeles and the Pacifica Network.