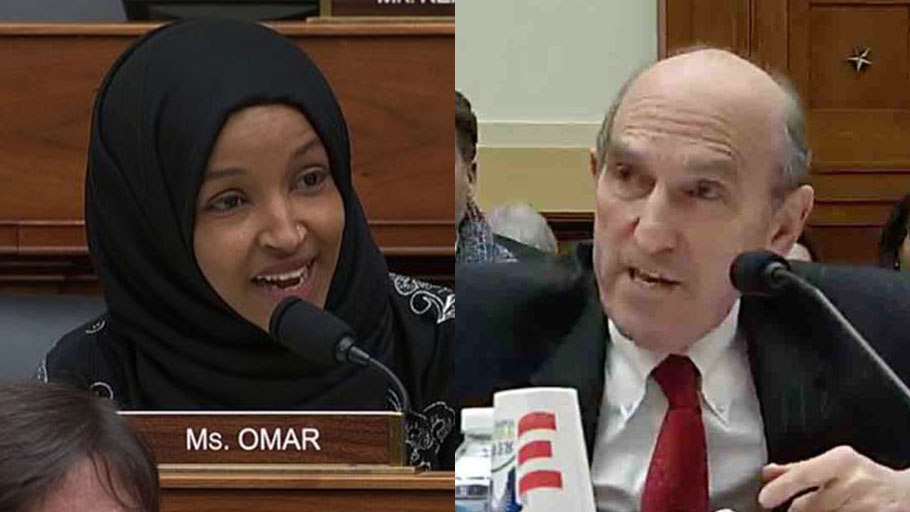 Ilhan Omar (D-MN) is a member of Congress. Let me repeat that. Ms. Omar is a member of Congress. So how dare Elliot Abrams, 45’s nominee as Venezuelan envoy presume to interrupt the Congresswoman as she made a statement and interrogated him? He was relatively docile when white people questioned him, but was angry and ignorant in his response to the Congresswoman. His behavior was disgraceful. He said he “would not respond to a personal attack,” although he was the one who pled guilty to withholding information from Congress and was later pardoned for his perfidy.

I must commend Congresswoman Omar on her focused and poised interrogation. I must condemn Mr. Abrams for his rude defiance to the Congresswoman. Their exchange is illuminating because it encapsulates the change in tone and tenor in Congress. Old white men can hold onto their privilege, but younger women, some women of color, aren’t’ having it. They are doing what they need to do to provide for the people who elected them.

Congresswoman Omar’s interrogation of Elliot Abrams has a back-story. Last week she tweeted that the blind Congressional support of Israel is “all about the Benjamins.” Jewish people were disturbed that her remarks were anti-Semitic (I don’t necessarily think so), and she apologized in the face of pressure. But now the deranged “leader” in the White House has called for her resignation (despite his own hateful, racist, anti-Semitic and other statements) and Vice-President Pence said there should be “consequences” for her comments (although no one has ever experienced consequences for genital grabbing). There have been calls for Omar to lose her seat on the House Foreign Relations Committee. She prevailed, with dignity, in her questioning of the corrupt Elliot Abrams. She is to be applauded.

Again, let me say, how dare that man! How dare he disrespect a member of Congress, something he would not have done if a white man were questioning him! How dare he interrupt her, how dare he talk over her, but thank you, Elliot Abrams, for projecting the many experiences that Black women and other women of color have had in corporate boardrooms and in other places where our voices are not valued.

Abrams, you are a pardoned liar. You are a shady scandal. You ought not to be walking out among free folks, but 45 has pulled you out of the disgraceful slush pile (yes, Hillary was right when she called some folks “deplorables”) to help our country interfere in yet another free nation, Venezuela. You needed to sit at that table and behave humbly, but humble is not in your vocabulary when your white privilege collides with the Black power of a Congresswoman who has the right to interrogate you. I get it; you didn’t like it not one bit. So here’s a message you need to send back to your circle of aging troglodytes – get ready for it!
Here’s the deal and here’s the bottom line. There are 110 women in Congress. There are congressional committees co-chaired by women on both sides of the aisle. These are women who are not planning to put up with your over talking shenanigans. These are women who are out of time regarding you.

And while democratic and Republican women aren’t always on the same page, the fact that of the 110 women in Congress, only 13 are Republican speaks to the failures in your party. With 435 members in the House of Representatives, equity means that at least 217 are women. On the Democratic side, this increasingly means women of color, who are staring down your white privilege and eviscerating it.

So that man who occupies the People’s House has the temerity to call for Rep. Ilhan Omar’s resignation oblivious of his own moral depravity. She had the right response in a tweet, “You have trafficked in hate your whole life—against Jews, Muslims, Indigenous, immigrants, black people and more. I learned from people impacted by my words. When will you?” The fact is that 45 doesn’t learn. If he did, he would stop tweeting.

As Omar has noted, “Anti-Semitism is real.” At the same time, it is important to note that criticism of Israel is not anti-Semitic. The Israeli occupation of the West Bank is simply wrong and violates every notion of human rights. The backlash against Angela Davis, Marc Lamont Hill, Tamika Mallory, and Alice Walker is also wrong. While we must address Anti-Semitism, we must also address the ways that Israel has been oppressive to Palestinians and the ways that Israel advocates have, especially, attempted to shut down Black voices that embrace the human rights of ALL people, including Palestinians.

We must also address the ways that a white male criminal was allowed to behave badly and arrogantly when an elected member of Congress made a statement and asked reasonable questions. Congresswoman Ilhan Omar is to be commended for her work. Elliott Abrams is to be condemned for his rude and futile clinging to his sick white privilege!