Trump Is the Real National Emergency

You Are Here: Home » Editors' Choice » Trump Is the Real National Emergency 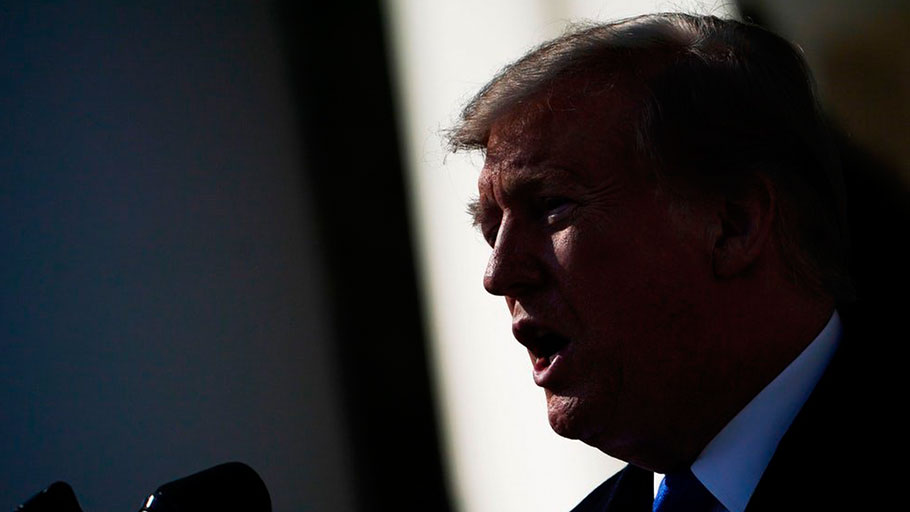 The president is using his executive power not to address a legitimate crisis, but to satisfy a political goal.

By Matt Ford, The New Republic —

President Donald Trump has announced that he will sign the compromise spending bill struck between Democrats and Republicans this week, which will avert another government shutdown and provide $1.375 billion for new barriers along the southern border. Unhappy with that amount—he had requested $5.7 billion from Congress—Trump said on Friday that he will sign a national emergency to access billions more in taxpayer funds for his wall.

Many Democrats, and some Republicans, are alarmed by his daring attempt to further expand presidential power. Senator Kirsten Gillibrand, who is running for president, called the declaration an “outrageous abuse of power.” Another 2020 candidate, Congresswoman Tulsi Gabbard, took it a step further:

Every time a president declares a “national emergency” in order to get his way on a particular issue, the closer we are to a dictatorship. Who needs Congress or the people if the president can make the decision on issues by himself? Very dangerous precedent.

Trump’s declaration does not reflect any sort of Reichstag fire moment. He is not suspending the Constitution or the rule of law. But it’s certainly an unprecedented move. Past presidents have typically invoked emergency powers in good faith, and in ways that Congress intended—in response to terrorism or overseas conflicts, for instance. Trump is doing so purely for political gain, to show his flagging base of supporters that he’s serious about fulfilling his signature campaign promise—even aspolls show that a majority of Americans oppose the wall and the idea of declaring a national emergency to build it.

Trump insists that the situation at the southern border constitutes a “national security crisis,” but the facts don’t support his justification for declaring a state of emergency. Border crossings have been in steady decline for more than a decade, undocumented immigrants commit fewer crimes than American-born citizens, most drugs are smuggled into the U.S. through or near legal ports of entry. If Trump really cared about stopping the illegal drug trade, he wouldn’t reportedly be plundering $2.5 billion from the Defense Department’s drug interdiction program as part of his executive gambit to secure more wall funding.

Trump has now set the stage for yet another grueling slugfest in the courts. He’s thrown Senate Republicans in politically treacherous waters by forcing them to choose between the public’s antipathy towards the wall and the GOP base’s enthusiastic support for it. And he’s set a precedent that may allow Democrats to achieve key policy goals without the Senate’s consent the next time they take the White House.

First, Trump’s declaration will likely have little practical impact in the short term. Legal challenges could place the wall funding in limbo for months or even years, like virtually every other major unilateral policy initiative rolled out by the administration. “Did I ever say I was filing a legal challenge?” House Speaker Nancy Pelosi told reporters on Thursday. “I may. That’s an option. And we’ll review our options.” A federal appeals court allowed House Democrats to intervene in an Obamacare-related case earlier that day. Even if Democrats or other plaintiffs don’t prevail in the end, delays in the lower courts could effectively run out the clock before the 2020 elections.

We’ve been here before, most notably with the travel ban. His executive order to bar visa applicants from a several Muslim-majority countries went through three iterations before the Supreme Court signed off on it last June. It’s impossible to know whether the justices would also approve Trump’s state of emergency. Much would depend on the exact legal circumstances of the case, including who brought it and the grounds on which they challenged the declaration. No matter whether they win or lose, Democrats would likely reap some long-term benefits.

Let’s imagine that the Supreme Court strikes down the declaration. Perhaps the justices decide that Trump didn’t act in response to a genuine national emergency, because border crossings have been declining for almost 20 years. Perhaps they decide that the National Emergencies Act of 1976 delegated too much of Congress’ power to the executive branch. In either case, a ruling that constrained the executive branch’s discretion would be welcome under Trump and beyond. Many of Trump’s worst policies—the travel ban, the family-separation policy, and more—came from broadly worded legislation by Congress. Lawmakers should change that approach to lawmaking, and a nudge from the justices wouldn’t hurt.

If, on the other hand, Chief Justice John Roberts and his colleagues give their blessing to Trump’s maneuver, then Democrats would gain new tools to advance their agenda next time they control the White House. It’s not impossible to imagine a President Elizabeth Warren or a President Kamala Harris declaring that climate change is a national emergency, and diverting military funds toward civil works that would mitigate it. Declaring an emergency probably wouldn’t allow Democrats to enact the entire Green New Deal or Medicare for All. But it could be a useful way to get around the threat of a Senate filibuster.

Pelosi hinted at such opportunities in her comments to reporters on Thursday. “Let’s talk about today, the one-year anniversary of another manifestation of the epidemic of gun violence in America,” she said, referencing the school shooting in Parkland, Florida last year. “That’s a national emergency. Why don’t you declare that emergency, Mr. President? I wish you would. But a Democratic president can do that. Democratic presidents can declare emergencies as well. So the precedent that the president is setting here is something that should be met with great unease and dismay by Republicans.”

Indeed, unease and dismay is an apt description for how some Senate Republicans have responded to the news. “I don’t believe that’s the way we should do these sorts of things,” Florida Senator Marco Rubio told reporters on Thursday. “I actually think there’s a real constitutional question about it.” Maine Senator Susan Collins complained that the move “undermines the role of Congress,” while Kentucky Senator Rand Paul said he was “not in favor of operating government by national emergency.”

They’ll have a chance to demonstrate their views more directly soon. Thanks to the National Emergencies Act, House Democrats can put Senate Republicans on the spot: The House has the power to pass a resolution overriding the president’s declaration, and the Senate must approve or reject it; even a vote to not consider the motion would count as de facto approval of it. These complications are why Senate Majority Leader Mitch McConnell previously urged Trump not to declare a state of emergency. An override may well pass the Senate, and if so, Trump would be forced to issue his first veto as president—overruling some prominent members of his own party in order to build an unpopular wall.

So why did McConnell relent and declare his support for the president’s plan to declare a national emergency? Trump reportedly had last-minute apprehensionsabout signing the compromise spending bill, even though a veto would have triggered another partial government shutdown for which Republicans would bear the blame. McConnell could not risk that, and likely was unable to change Trump’s mind about the emergency declaration. This is the perfect encapsulation of the ruling Republican Party today: an uncompromising president who inflicts long-term damage to avoid the short-term humiliation, and a spineless leader of the Senate who stands by him every step of the way.

Arkansas Delta town finding the truth about 1919 massacre that killed 200
We Need Your Support — Donate, Share, Sign-Up Ways to Support