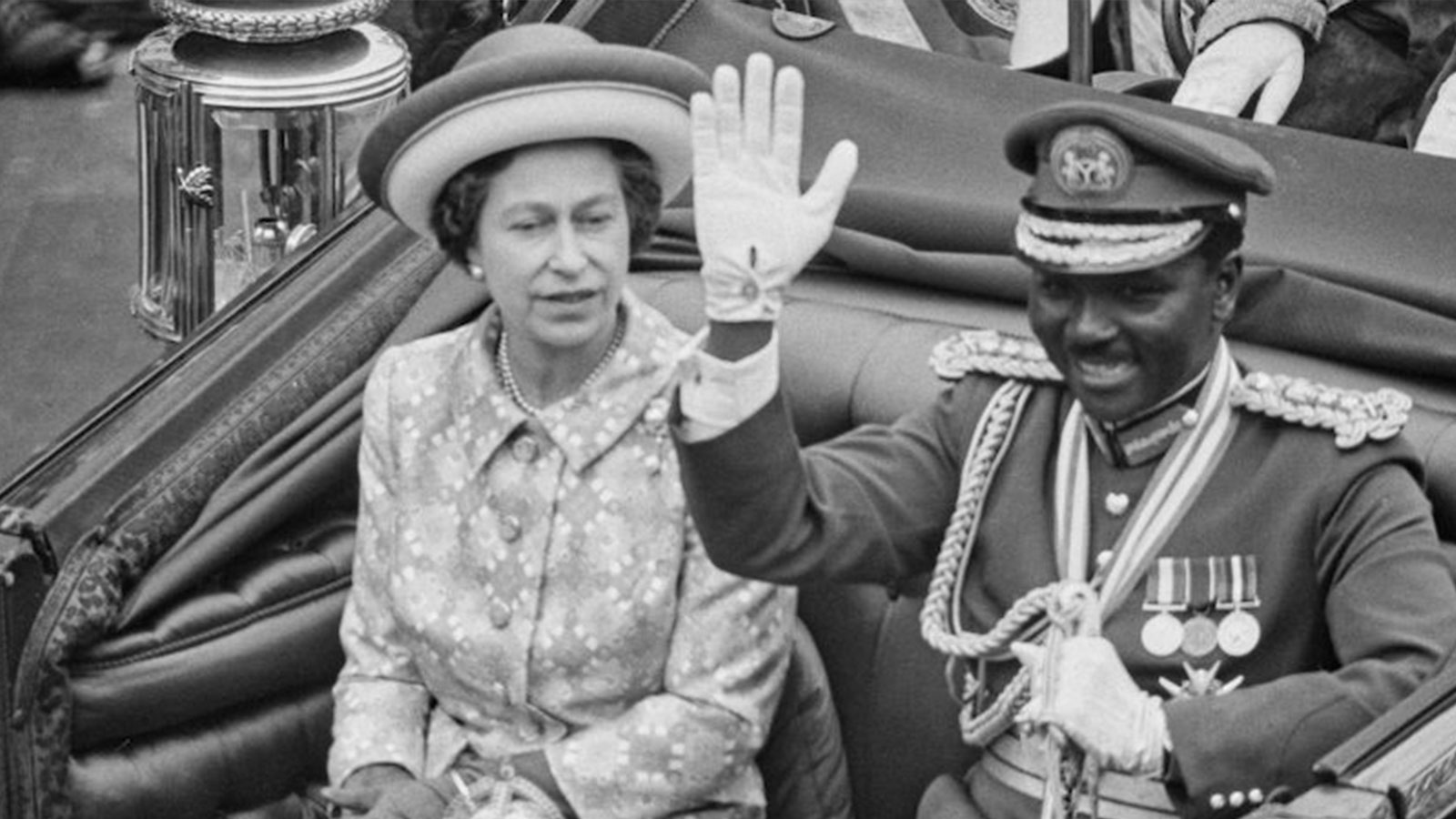 How clean are the hands of a Queen?

You Are Here: Home » Blog » Commentaries/Opinions » How clean are the hands of a Queen?

When the state acts in your name, it’s your reputation that’s held to account.

Marie Howe was a state representative from the 31st Middlesex District in the Massachusetts House for 23 years. Her political career was long but largely unremarkable, except for what happened on July 17, 1976. That was the day that Queen Elizabeth II arrived in Boston as part of the city’s celebration of this country’s bicentennial. Of course, this happened in the middle of Great Britain’s military involvement in Northern Ireland. Given the heavy involvement of the Irish diaspora in the life and history of the city of Boston, you can imagine that feelings were a bit raw on the subject.

A group of protestors tried to press their case to Ms. Windsor on the grounds of the Charlestown Navy Yard. Things got a bit frisky, and the protestors got into it with the police. Howe was in the middle of this fracas, and when a Boston cop was bitten on the arm, it was widely rumored that Howe was the one who’d gotten a taste of blue. (This was never proven.) When she was busted, Howe gave her name as “Rita Plunkett,” perhaps jumping into the family of Joseph Mary Plunkett, one of the signatories to the declaration of the Irish Republic who’d been married and executed on the same day in 1916. That was the closest I ever came to the British royal family, and the closest that I’d like to be.

Upon the queen’s passing this week, Twitter was both an interesting place—and a very tough room. The platform was thick with condolences and memories, but these were shot through with some echoes of British colonial stupidity. “Irish Twitter” trended because of some mockery of the royals. But a linguistics professor from Carnegie Mellon University named Uju Anya held nothing back. Her tweet read, according WPXI: “I heard the chief monarch of a thieving raping genocidal empire is finally dying. May her pain be excruciating.”

“We do not condone the offensive and objectionable messages posted by Uju Anya today on her personal social media account. Free expression is core to the mission of higher education, however, the views she shared absolutely do not represent the values of the institution, nor the standards of discourse we seek to foster.”

She took heat from Jeff Bezos and Piers Morgan and hundreds of others. And in response to all of that, she tweeted: “If anyone expects me to express anything but disdain for the monarch who supervised a government that sponsored the genocide that massacred and displaced half my family and the consequences of which those alive today are still trying to overcome, you can keep wishing upon a star.”

Anya’s father was a member of the Igbo people of eastern Nigeria. In 1966, the people of that region, angered by the corruption and brutality of the Nigerian central government, struck for their independence as the Republic of Biafra. A year later, a British-sponsored peace conference ended with a treaty that the Nigerian army, which was really running things, reneged upon. Great Britain did nothing. Instead, the British government criticized the Biafrans for their attempted secession.

Novelist Frederick Forsyth, then working for the BBC, arrived in Lagos and found himself enmeshed in the kind of diplomatic mendacity that American correspondents were experiencing in Vietnam.

I arrived in the Biafra capital of Enugu on the third day of the war. In London I had been copiously briefed by Gerald Watrous, head of the BBC’s West Africa Service. What I did not know was that he was the obedient servant of the government’s Commonwealth Relations Office (CRO), which believed every word of its high commissioner in Lagos, David Hunt. It took two days in Enugu to realise that everything I had been told was utter garbage.

I had been briefed that the brilliant Nigerian army would suppress the rebellion in two weeks, four at the most. Fortunately the deputy high commissioner in Enugu, Jim Parker, told me what was really happening. It became clear that the rubbish believed by the CRO and the BBC stemmed from our high commissioner in Lagos. A racist and a snob, Hunt expected Africans to leap to attention when he entered the room – which Gowon did.

Forsyth got the Anya treatment. At the urging of the British government, the BBC hauled him back to London and accused him of being pro-Biafran. In 1968, Forsyth quit in disgust and went back to Biafra on his own dime. What he saw disgusted him further.

Things had changed. British covert interference had become huge. Weapons and ammunition poured in quietly as Whitehall and the Harold Wilson government lied and denied it all. Much enlarged, with fresh weapons and secret advisory teams, the Nigerian army inched across Biafra as the defenders tried fight back with a few bullets a day.

In July, the story broke wide open. Suddenly, there was testimony from Biafrans and various missionaries about widespread famine throughout the region. Biafra became a world humanitarian cause célèbre. British Prime Minister Harold Wilson reportedly told an American diplomat, “I would would accept half a million dead Biafrans if that was what it took” to settle the war in favor of the Nigerian government. Champion boxer Dick Tiger, an Igbo by birth, returned and helped train the Biafran military in hand-to-hand combat. A risky relief airlift ran night and day, dodging Nigerian fighter aircraft and landing on strips that were barely paths in the jungle. Forsyth:

Karl Jaggi, head of the Red Cross, estimated that up to a million children died, but that at least half a million were saved. As for me, sometimes in the wee small hours I see the stick-like children with the dull eyes and lolling heads, and hear their wails of hunger and the low moans as they died.

What is truly shameful is that this was not done by savages but aided and assisted at every stage by Oxbridge-educated British mandarins. Why? Did they love the corruption-riven, dictator-prone Nigeria? No. From start to finish, it was to cover up that the UK’s assessment of the Nigerian situation was an enormous judgmental screw-up. And, worse: with neutrality and diplomacy from London it could all have been avoided.

Between 1966 and 1970, an estimated 2 million Igbo were killed in the Nigerian civil war, a war that began with massive pogroms against the Igbo. The wounds have never healed, neither in Nigeria nor in Great Britain, where no accountability for its government’s shameful performance has ever been assessed or levied.

So anyway, this is the kind of thing that Jeff Bezos and Piers Morgan contemptuously hand-waved back into the memory-hole because they considered Uju Anya impolite. But the fact remains that the late Queen Elizabeth presided over British governments to whom all the remaining imperial bills came due, especially in Africa. The Japanese had closed a lot of the accounts in Asia at the beginning of World War II. Gandhi settled matters in India in 1947. And of course, the old American colonies became Britain’s creditors during both world wars. All that was left was Africa, and the north of Ireland.

It is not unique in history for British imperial subjects to focus their resentment on the British Crown as a symbol for the oppression under which they live. In August of 1849, Queen Victoria visited Dublin. Ireland was still feeling the effects of the Great Famine, over which the queen and a succession of prime ministers had presided and had done little to make things unthinkably worse. Her visit was greeted with surprising warmth, although she avoided the areas of the country where the Famine had been worst. However, when she came back in 1900, as the revolutionary fervor was starting to rise, Irish rebel leader Maud Gonne dubbed her “The Famine Queen.” It stuck. Gonne wrote:

And in truth, for Victoria, in the decrepitude of her eighty-one years, to have decided after an absence of half-a-century to revisit the country she hates and whose inhabitants are the victims of the criminal policy of her reign, the survivors of sixty years of organised famine, the political necessity must have been terribly strong; for after all she is a woman, and however vile and selfish and pitiless her soul may be, she must sometimes tremble as death approaches when she thinks of the countless Irish mothers who, sheltering under the cloudy Irish sky, watching their starving little ones, have cursed her before they died.

I am sorry for anyone whose feelings were hurt by what Anya wrote. By all accounts, the late queen was a decent skin who reigned longer than anyone else, even longer than Victoria.

But the very fact of being a queen removed her from the gritty, bloody details of empire, even if it was the shadow of one. She had no more connection with Biafra than Victoria had with Kerry or Connaught. Maud Gonne—whose essay was suppressed by the British colonial government—would have understood Uju Anya. They’d have become fast friends.