How Not to “Bring Back Our Girls”

You Are Here: Home » Blog » Commentaries/Opinions » How Not to “Bring Back Our Girls” 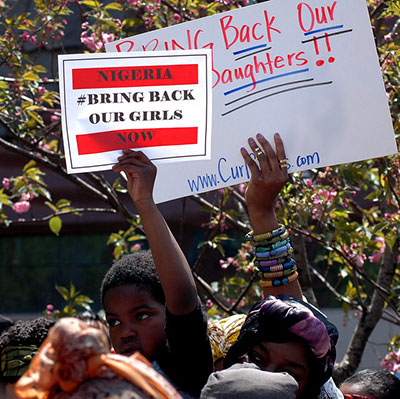 “The last thing Nigeria needs is a foreign military presence to prop up its corrupt government.”

Hudreds of people gathered at Union Square in New York City on May 3 to demand the release of some 230 schoolgirls abducted by Boko Haram insurgents in Nigeria. (Image: Michael Fleshman / Flickr)Bring back our girls. The message is a simple one that resonates with millions of people around the world. Those four words were first seen in a now famous twitter hashtag in the aftermath of the kidnapping of 280 teenagers from a school in Chibok, Nigeria on April 14, 2014. The Boko Haram group which is fighting that country’s government admits to holding the girls captive.

Only people who closely follow international news were aware of this situation until last week. It is right that so many people are concerned for the girls’ safety. Unfortunately, the effort to draw attention to this horror is of little use without a deeper understanding of Africa’s political situation.

Because western nations continue to interfere in Africa’s affairs and place compliant “strong men” in power, nearly every government on that continent is weak. Presidents and prime ministers exist only to enrich elites and ensure that valuable resources reach the western capitalist nations. It seems ludicrous that Nigerian president Goodluck Johnathan at first denied that the kidnap had taken place, and then vacillated between claiming that the girls had been recovered or that the number captured was smaller than reported. Hashtags and petitions are a poor substitute for a government whose infrastructure is dedicated to producing and delivering oil to the West but not doing very much for its own citizens.

“Relatives of suspected Boko Haram members were detained by the police in 2011 and 2012 and that the group swore revenge.”

It is little wonder that this story is so new to American ears. According to the Tyndall Report, which monitors daily broadcasts of the three major U.S. networks, there was not a single television news story about Boko Haram in 2013. This absence of information comes despite the fact that the group claimed responsibility for the deaths of more than 1,500 people in the past year. Not only is the Chibok case not the first kidnapping of girls, but boys fare even worse in these attacks. Boko Haram killed 29 male students at a boarding school in February 2014. Americans ask why these girls were taken and why they can’t be found without having any of the information which would answer those questions. The anger and sadness exist in a vacuum and are therefore useless in bringing about a resolution.

Because Americans are so poorly informed about the rest of the world, and so strangely enamored of their own government and its intentions, they automatically fall back to the worst solution of all, foreign military intervention. President Obama has said that he will assist the Nigerian military. That solution may please people who are understandably concerned about the fate of these young women, but that doesn’t make it very helpful.

The last thing Nigeria needs is a foreign military presence to prop up its corrupt government. Nigeria is a linchpin of AFRICOM, which puts African militaries under the direct command of the United States. AFRICOM is in place to protect the resource pipeline and to restrict efforts to keep any other nations from bringing resources that Africans actually need. AFRICOM’s presence certainly hasn’t helped the victims of Boko Haram thus far.

The late to the party news stories never mention that relatives of suspected Boko Haram members were detained by the police in 2011 and 2012 and that the group swore revenge. Boko Haram leader Abubakr Shekau said in one his many videos, “Since you are now holding our women, just wait and see what will happen to your own women… to your own wives according to sharia law.” The kidnappings of the past two years are a direct result of the government’s mistreatment of its people and its failed efforts to fight Boko Haram.

“American allies like Yoweri Museveni in Uganda and Paul Kagame in Rwanda have kidnapped children and forced them to become soldiers.”

This simple tale is not so simple after all. The media constantly repeat that Boko Haram means “western education is forbidden.” Except that it more likely means that deception, such as that which came with western colonization and its education system, is forbidden. If this very basic fact about Boko Haram can’t be reported properly, then the media are of little help to the missing girls or to the people all over the world who care so much about them.

While Americans wring their hands over the abducted teens, they know nothing about the African strong men supported by their government who do the very same thing. American allies like Yoweri Museveni in Uganda and Paul Kagame in Rwanda have kidnapped children and forced them to become soldiers. Both are also responsible for the deaths of six million Congolese. Americans not only have to be better informed, but they must stop thinking that their government and its allies are good and beneficent when they are anything but.

Sometimes the answer to the question, “What can we do?” is “Nothing.” There is nothing that the average American citizen can do to get these girls released and those with the power to do something aren’t very interested in internecine warfare in Nigeria. Their machinations created this and so many other tragedies around the world.

It is difficult not to have a strong emotional reaction to such a terrible story but that is the precise moment to dig deeper and search for complexities. That is the least that can be done to help bring back our girls.

Margaret Kimberley’s Freedom Rider column appears weekly in Black Agenda Report, and is widely reprinted elsewhere. She maintains a frequently updated blog as well as at http://freedomrider.blogspot.com. Ms. Kimberley lives in New York City, and can be reached via e-mail at Margaret.Kimberley(at)BlackAgendaReport.com.