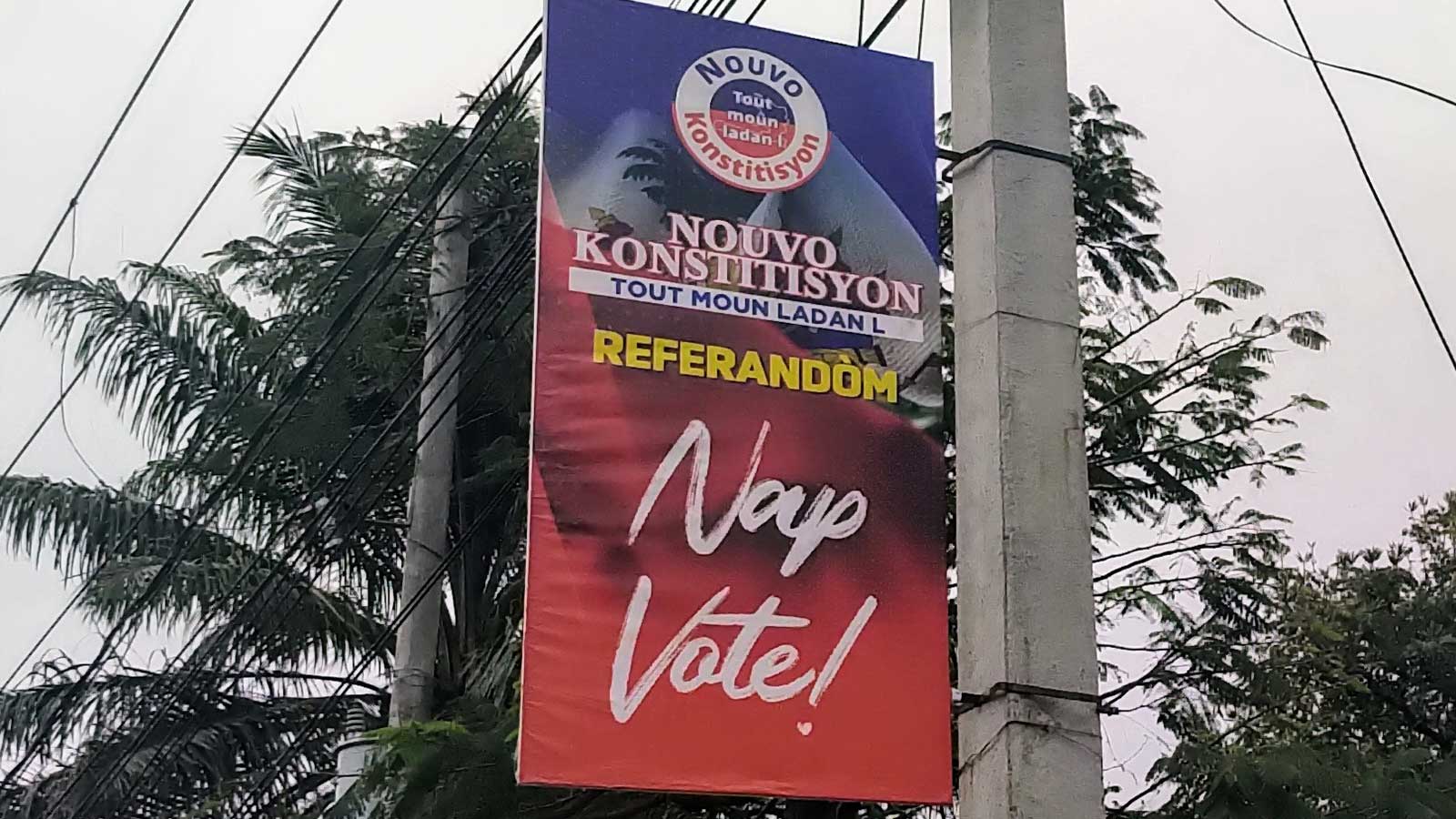 You Are Here: Home » Blog » Commentaries/Opinions » How the International Community is Supporting an Illegal Power Grab in Haiti

“New Constitution: We Will Vote.”

The billboards are plastered across Port-au-Prince and throughout the country, as the government launches an all-out push ahead of a referendum planned for next month. The government is holding televised “debates,” printing ballots, lobbying international organizations, and apparently laying the groundwork for what it claims is a necessary effort to put Haiti’s governance on a path to success.

The catch? The campaign is only happening on one side. The entire effort is contested by myriad civil society organizations, grassroots groups, and political parties, all of whom maintain that the referendum is an illegal power grab on the part of Haitian president Jovenel Moïse. In fact, over the last week, a number of prominent political actors have called on the population to revolt against the referendum and use whatever means possible to prevent the vote from taking place.

For a more detailed discussion on the specifics of the constitutional reform, and why many in Haiti are so adamantly opposed to it, the Haitian Studies Association recently hosted a roundtable discussion with leading Haitian experts on the subject.

Haiti is not the only country in the hemisphere currently debating constitutional reform. Last fall in Chile, voters overwhelmingly voted in favor of creating a new charter, and then earlier this month elected representatives responsible for drafting the new text. The constitutional convention’s work is expected to take many months, and the vote on the new text is not expected until sometime in mid-2022. There are regulations mandating the involvement of traditionally marginalized groups, including women and the nation’s Indigenous population.

By contrast, Haiti’s new charter was drafted by a small commission composed entirely of members handpicked by the president. On June 27, when Haitians are being asked to go to the polls, they will have to vote on the entirety of the new text with a simple “yes” or “no,” even though they have yet to see the final version. The commission did not issue a first draft of the proposed changes until January, and released it only in French, which the vast majority of Haitians do not speak. It released a revised version in late May, a month before the scheduled vote, and plans to issue one more version in June.

This week, after meeting with Moïse, the US ambassador to the United Nations, Linda Thomas-Greenfield, reiterated the official position of the international community that, thus far, preparations for the referendum “have not been sufficiently transparent or inclusive.” The US’s public position is that its preference is for the Haitian government to first focus on holding legislative and presidential elections this fall before tackling the constitution controversy. For the last 17 months, Haiti has been without a functioning parliament, allowing the entire referendum process to unfold with President Moïse ruling by decree and without legislative oversight.

For many in Haiti, Moïse shouldn’t be in the National Palace anymore, let alone oversee the creation of a new constitution. Legal experts, human rights organizations, religious entities, and a broad-based network of civil society organizations contend that Moïse’s presidential mandate ended on February 7, 2021. They maintain that not only is his reform effort illegal, but that there is no chance for free, fair, or credible elections to be held under his watch at all. Last month, 69 members of the US Congress wrote to Secretary of State Antony Blinken expressing their agreement.

“We have repeatedly stated that constitutional reform is for the Haitian people to decide,” State Department spokesperson Ned Price told the press in late April. “We’ve emphasized to the Haitian government that the US government will not provide financial support for a constitutional referendum.” But, while the US isn’t providing direct support, that does not mean its policy is not de facto enabling the referendum.

The international community has remained largely silent on the question of the referendum. The Core Group, which consists of the US, Canada, Brazil, France, the EU, the UN, and the OAS, among others, issued a statement in April noting that the process was not sufficiently transparent or inclusive. Nevertheless, international actors have refrained from explicitly calling for its cancellation or even its delay. Further, both the UN and the OAS are actively providing support for the referendum, despite their public statements of concern.

These two multilateral organizations have provided technical assistance to the commission tasked with drafting the new text since it was formed last fall. The OAS even helped with revisions to the text in an attempt to remove some of the more controversial aspects in the original. The UN, meanwhile, has helped to procure sensitive voting materials for the electoral council overseeing the referendum and has an agreement in place to provide logistics for holding the vote. The UN is also helping to advise the national police on an electoral security strategy.

But, more important than this technical assistance is the international community’s insistence on the holding of elections this fall. It is simply impossible to separate elections from the referendum, and donor support for the former is making the latter more likely by the day.

For starters, the new constitution would drastically alter the political landscape; for example, replacing the post of prime minister with a vice president, and abolishing the Senate altogether. Additionally, the draft text, if approved, mandates the government to institute a new electoral law. How can one speak of organizing elections in a few months when nobody even knows what posts will actually be contested, or under what laws? Clearly, the elections depend to a great degree on what happens in June.

Further, the international push for elections papers over valid criticisms of the broader voting process. The current electoral council was appointed by decree by the president, contrary to the law; the supreme court refused to swear in the new members. This is the electoral council that is set to oversee both the referendum and the elections later this year. By supporting their management of elections, one inherently supports their management of the referendum.

The US support for the illegal electoral council goes even further. Through USAID, the US government has spent $12.6 million since Moïse was elected in support of “elections and political processes.” Most of that money goes to US-based entities like the National Democratic Institute (NDI), the International Republic Institute (IRI), and the International Foundation for Electoral Systems (IFES). The organizations implement their own programs, and so do not necessarily equate to “direct” support to the referendum or to elections.

But, in late March, acting Assistant Secretary of State for the Western Hemisphere Julie Chung tweeted: “The U.S., via @USAID_Haiti, is helping the Haitian people prepare for elections by providing technical support to the @cep_haiti, strengthening political parties and NGOs, and increasing the participation of women in Haitian politics.”

The US may not be directly funding the referendum, but make no mistake, the policies of the international community are going a long way toward ensuring the controversial referendum takes place as scheduled.

Jake Johnston is a Research Associate at the Center for Economic and Policy Research (CEPR) in Washington, DC.
Source: CEPR