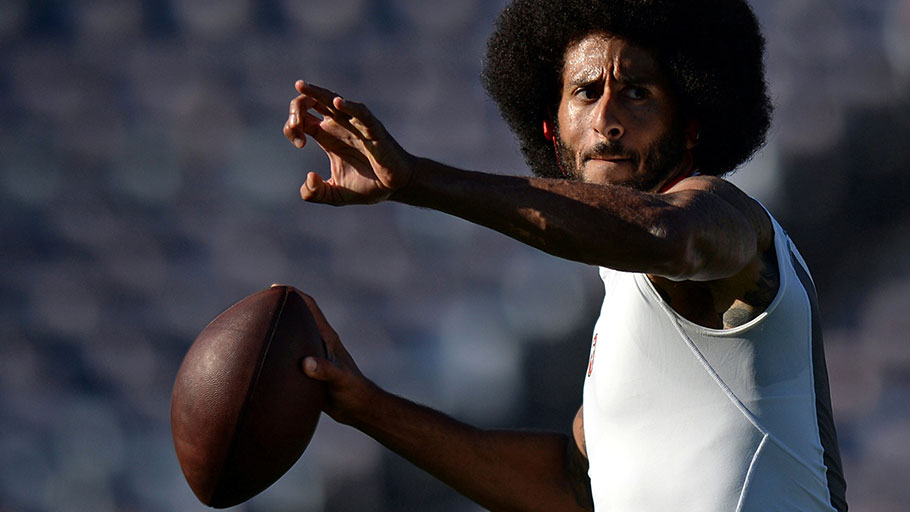 To watch America’s structural racism at work, one need look no further than the National Football League (NFL) and its treatment of nonviolent unorthodoxy as expressed by Colin Kaepernick going to one knee during the national anthem in support of the unacceptable thought that black lives should matter as much as anyone else’s. Of course, that’s still a relatively new idea in the United States, dating from 1863 in law and still not fully accepted in much of the country.

Colin Rand Kaepernick, who turns 30 in November, is a proven professional football quarterback who chose to become a free agent after the 2016 season. He led San Francisco to the Super Bowl in 2012. He is good enough to play for most any of the NFL’s 32 teams, but none have signed him. A year ago, when unarmed black men shot by cops were getting heavy news coverage and while presidential candidates Clinton and Trump disparaged Black Lives Matter, Kaepernick undertook a solo protest, sitting during the national anthem before the first NFL pre-season game. In subsequent games, Kaepernick went down on one knee in silent, respectful protest during the Star Spangled Banner. Asked by an NFL Network reporter why he was doing that, Kaepernick said:

I am not going to stand up to show pride in a flag for a country that oppresses black people and people of color. To me, this is bigger than football and it would be selfish on my part to look the other way. There are bodies in the street and people getting paid leave and getting away with murder….This is not something that I am going to run by anybody. I am not looking for approval. I have to stand up for people that are oppressed…. If they take football away, my endorsements from me, I know that I stood up for what is right.

At the time, official football – the league, his team, his coach – all spoke carefully about respecting Kaepernick’s “right as a citizen,” without engaging the issue he was raising. Kaepernick is bi-racial. He was adopted by white parents and raised in Wisconsin with white siblings.

In November 2016, a Miami Herald reporter asked Kaepernick about a shirt he had worn showing Fidel Castro and Malcolm X with the caption: “Like Minds Think Alike.” In discussing the shirt, Kaepernick reportedly said: “One thing that Fidel Castro did do is they have the highest literacy rate because they invest more in their education system than they do in their prison system, which we do not do here, even though we’re fully capable of doing that.”That sort of truth, spoken out loud, does not endear one to the overlords of the NFL or other American authorities, especially the ones who created and profit from the unaddressed, unending scandal of prisons for profit.

A year after he first spoke out by kneeling in silence, Colin Kaepernick is unemployed. Unarmed black men are killed by cops at a faster rate now than in 2016, but it’s not news so much anymore. Kaepernick had his free speech, now he’s paying the price. The country has moved on to a more ardent defense of free speech by Nazis, white supremacists, the KKK, anti-Semites, and other bigots.

The Trump administration is contributing to social calm and order by setting out to give local police more military weapons, from armored troop carriers to grenade launchers.

The ugliest sign of the country’s darkening racial zeitgeist is President Trump’s pre-emptive, unprincipled, unconditional pardon of one of America’s most notorious police bigots, former sheriff Joe Arpaio of Arizona, a man who spoke proudly of his brutal and deadly prison system as a “concentration camp.” Arpaio was awaiting sentencing when the President interdicted the judicial process with a hasty pardon, granted without any of the usual review and consideration. The brief White House announcement concluded with these lies:

Throughout his time as Sheriff, Arpaio continued his life’s work of protecting the public from the scourges of crime and illegal immigration. Sheriff Joe Arpaio is now eighty-five years old, and after more than fifty years of admirable service to our Nation, he is worthy candidate for a Presidential pardon.

Arpaio’s record is reasonably clear that he did little protecting of the public or the Constitution. His office operated with racist standards that encouraged police brutality and led to prisoner deaths from violence and neglect. Arpaio’s service as sheriff was not admirable but self-serving, obsessed with targeting Latinos regardless of guilt, while ignoring real criminal offenses, including domestic abuse and child abuse.

Kaepernick and the Star Spangled Banner of American irony

Some say Kaepernick is the victim of a blacklist. Others deny what seems obviously true. One of the deniers makes much of a few other players making similar gestures without consequences. But he leaves out critical facts: that these are players currently under contract and that they have a union to defend them. He makes a point of saying that “NFL rosters are 70 per cent Black,” without wondering why NFL rosters are close to 100 per cent without any expressed social conscience. He does not mention that NFL owners would be 100 per cent white but for some limited partners like Reggie Fowler of the Minnesota Vikings.

American racism is structural, institutional, shameless, and intractable. Electing Barack Obama in 2008 didn’t make the country a post-racial society any more than electing Donald Trump in 2016 makes the country a post-sane society. The abiding ambiguity of American madness can be seen in our “national anthem,” which has been our national anthem less than 100 years (adopted 1931).

The Star Spangled Banner celebrates the defense of Fort McHenry in Baltimore Harbor in 1814 in Maryland, a slave state. The attacking British force included numbers of escaped slaves fighting for the British on the promise of earning their freedom. Francis Scott Key, who wrote the Star Spangled Banner, was a lifelong slave owner. A lawyer who served as US Attorney, Key used his office to prosecute abolitionists. In an 1837 prosecution of abolitionist Dr. Reuben Crandall for instigating a slave rebellion, Key said in his summation to the jury:

Are you willing, gentlemen, to abandon your country, to permit it to be taken from you, and occupied by the abolitionist, according to whose taste it is to associate and amalgamate with the negro? Or, gentlemen, on the other hand, are there laws in this community to defend you from the immediate abolitionist, who would open upon you the floodgates of such extensive wickedness and mischief?

Rendered in modern language, these are the same sentiments the racists of Charlottesville expressed in their exercise of free speech. In 1837, the jury acquitted Dr. Crandall. On the Charlottesville hordes, the jury is still out.

Maybe, should our public consciousness come to grips with the reality that our national anthem is a slave owner’s paean to the defense of a slave state, we might think more seriously about kneeling ourselves. That might be a better way to express our hope to become, truly, the land of the free and the home of the brave.

William M. Boardman has over 40 years experience in theatre, radio, TV, print journalism, and non-fiction, including 20 years in the Vermont judiciary. He has received honors from Writers Guild of America, Corporation for Public Broadcasting, Vermont Life magazine, and an Emmy Award nomination from the Academy of Television Arts and Sciences.

Your Race and Zip Code Will Determine How Much Devastation You’ll Face After Hurricane Harvey
We Need Your Support — Donate, Share, Sign-Up Ways to Support