You Are Here: Home » Commentaries/Opinions » Orphaned by Poverty 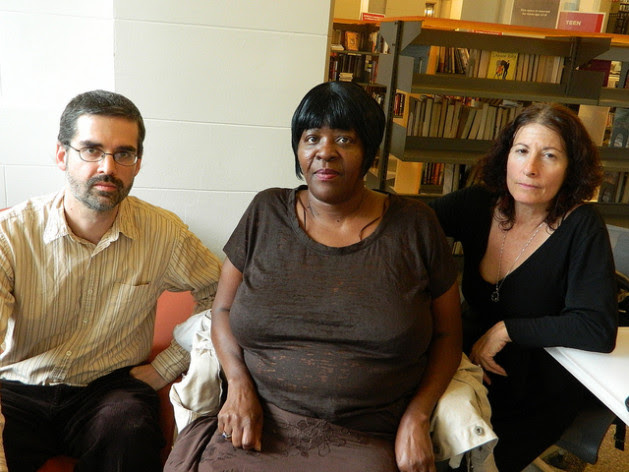 PHILADELPHIA, (IPS) – Seated at a table in the dimly lit café in Philadelphia’s public library, Carolyn Hill looks no different from her fellow diners. A few minutes of conversation, though, are enough to reveal the extent of her distress.

She is fighting a fierce custody battle against the city of Philadelphia, whose Department of Human Services (DHS) removes more children of colour into state custody than any other city of its size in the United States.

“All of the services needed to run this operation represent the possibility of huge government contracts for private companies.” — Celyne Camen

Hill told IPS the only reason she is unable to get back her children is because she is a low-income, single black woman – an analysis shared by many activists and experts working to reunite families torn apart by state authorities. [Read Part One of the series]

On Apr. 3, 2011, DHS Philadelphia placed Hill’s two nieces – one of them aged six months, the other just one-and-a-half years old – in her care, after their birth mother’s rights were terminated on charges of drug abuse.

Barely a year later – while the paperwork necessary to grant Hill status as the girls’ legal adoptive mother was being processed – a social worker from the Lutheran Children and Family Service, a private child support agency contracted by DHS, deemed Hill unsuitable for adoption, or even fostering.

Citing her lack of a GED as grounds for the immediate removal of the children, the social worker took the girls away, without notice, just before the Easter holiday.

“When they came to visit the kids, they would only stay 15 minutes,” she told IPS. “What can you learn about someone in 15 minutes? They call them home inspections, but they are more like home invasions.”

Unaware at the time of her rights as a caregiver and frantic for help, Hill stumbled upon a Philadelphia-based self-help group calling itself ‘DHS – Give Us Back Our Children’ (DHS-GUBOC).

Together with this community of volunteers and legal advocates, she has spent the last two years digging through to the nucleus of a systematic child removal policy in Philadelphia – beginning with overworked and under-qualified caseworkers sitting at the receiving end of child protection hotlines, and up through every level of social workers, agencies, courts and “child advocates”.

Anyone lodging a complaint against a parent need only call one of the many national hotlines, which refer calls to agencies like DHS for investigation.

(Philadelphia DHS did not respond to IPS requests for comment for this article).

Investigating caseworkers can then list the parent in a central register of child abusers based on nothing more than an hour-long interaction with the family.

“In some states, parents can appeal after the fact, in others there is no appeal at all,” Phoebe Jones, a member of the U.S.-wide Every Mother is a Working Mother (EMWM) Network, told IPS.

Once the allegation of abuse has been made, caseworkers can carry out strip searches and enter homes without warrants. In over 29 states, caseworkers are free to “confiscate” a child immediately if the parent resists any of these measures. In the rest of the states, Jones said, caseworkers can ask law enforcement to take the child for them.

Hill lays the blame for her current plight squarely at the feet of her own social workers. She says they were blinded by the fact that she lived in low-income housing, and failed to see that there was always food in the fridge, a home-cooked meal on the stove, and lots of laughter in her home.

“My nieces and I went out for walks together, took naps together, ate together, played together,” she said. “Now they are stuck in a daycare center from six in the morning until six in the evening every day.”

After fighting for a full year – protesting outside the courthouse, providing endless documentation as proof of her capabilities as a caregiver, enlisting the willing support of her extended family, her church and community – Hill finally managed to extract a retraction from the DHS.

But no sooner was she proclaimed fit to welcome back her children than the Support Centre for Child Advocates stepped in.

Child advocates, according to Celyne Camen of the EMWM Network, are tasked with representing children in ongoing dependency cases.

The advocate’s mandate is to press for what they think is best for the child, regardless of what the child may actually want. In the case of Carolyn Hill, one of the children in question was only 15 months old.

“How can a child of that age be represented by strangers who don’t understand her needs?” Camen asked.

In Camen’s opinion, the board of the Support Center for Child Advocates – which includes Swiss financiers, investment banks like Merrill Lynch, mammoth law firms like Blank Rome and some of the wealthiest CEOs of major drug companies – represents the huge financial incentives powering the child removal/foster care system in the U.S.

“These corporations are very interested in restructuring this particular sector to shift more influence into private hands,” she said. “All of the services needed to run this operation represent the possibility of huge government contracts for private companies.”

Aramark, a facilities management and supply firm, sits prominently on the board of the Support Centre. Among their many clients are 600 correctional institutions to whom they supply “everything from uniforms to pencils”, Camen said, pointing to a continuum between child care institutions and the vast archipelago of prisons scattered across the U.S – not unlike the widely covered “school-to-prison pipeline.”

Todd Lloyd, child welfare policy director of the non-profit organisation Pennsylvania Partnerships for Children (PPC), says housing alone for a single child could cost anything from 10,000 to 66,000 dollars a year.

“Keep in mind,” he told IPS, “that placement costs are not the only costs involved with out-of-home removal – there are other administrative, court and case management costs that come into play as well.”

All told, the finances required for statewide child removal operations grant DHS Philadelphia an annual operating budget of 600 million dollars – “Enough to transform the conditions for many children said to be neglected, along with their families,” Jones told IPS.

Hill says her struggle has put her in touch with dozens of parents fighting for their children. Many of them are juggling large families of five or more kids, and the vast majority report losing their parental rights over minor shortfalls.

“I met a mother whose aunt called DHS on her. When they arrived they didn’t find anything wrong except that the toilet in her house was backed up. But they took her kid away. That don’t make no sense – if your toilet is backed up you don’t need DHS, all you need is a plumber.”

How Big Money, Washington and the IMF Trumped Mandela

How Big Money, Washington and the IMF Trumped Mandela
We Need Your Support — Donate, Share, Sign-Up Ways to Support