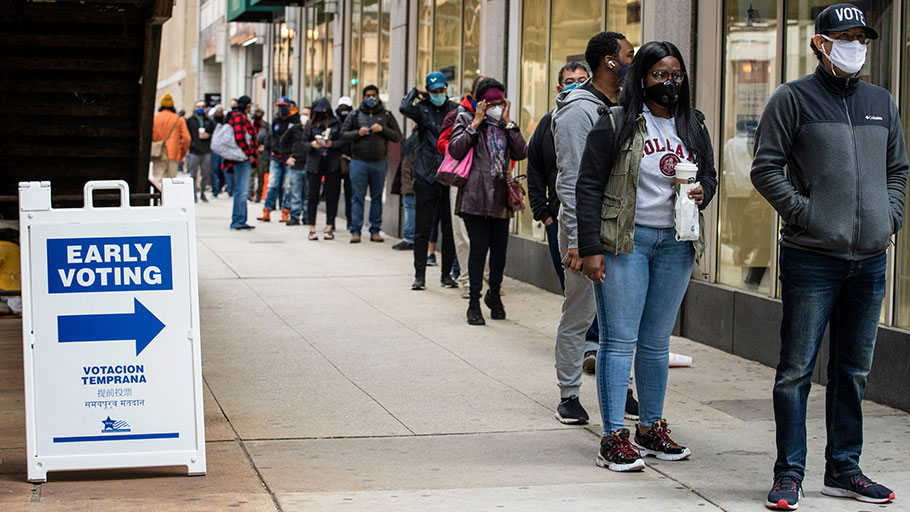 Our goal is record Black voter turnout to fire Trump and save Black lives: NAACP President

You Are Here: Home » Blog » Commentaries/Opinions » Our goal is record Black voter turnout to fire Trump and save Black lives: NAACP President

It’s not just Donald Trump and Joe Biden on the ballot, it’s a decision about the country we want. Honor John Lewis and Ruth Bader Ginsburg by voting.

Instead of focusing on the many crises devastating the Black community right now, and although voters are already casting ballots, Republicans are rushing to confirm Amy Coney Barrett to the Supreme Court. Once again, President Donald Trump and his enablers are showing us they prioritize power and party over the American people. There is simply too much at stake for our community not to mobilize in record numbers during the next three weeks, and elect politicians who will listen to and empower Black voters.

It is not hyperbolic to say that the 2020 election will be one of the most consequential elections of our lifetime, particularly for Black Americans. The global pandemic has revealed the continued existence of historic inequality and longstanding policies that disproportionately hit the Black community incredibly hard. Black people are dying at rates higher than our proportion of the population, and have less access to quality health care. Black unemployment is nearly twice as high as the white unemployment rate. Black renters are nearly twice as likely as white renters to be evicted. Despite these glaring disparities and a rising national death toll, the president has given himself an A+ for his handling of the pandemic.

Not only is the Black community living in perpetual fear of death by COVID-19, Black people are also living with the fear of losing their lives at any given moment while engaging with police officers. While Black death at the hands of law enforcement is not a new phenomenon, the veil that has been lifted on fatal police brutality has made it impossible for the country to sweep it under the rug any longer.

The acts of violence that killed Ahmaud Arbery, George Floyd and Breonna Taylor have sparked massive protests and a growing demand to reimagine public safety in this country. The president has responded to these legitimate calls to address systemic racism in our criminal justice system by calling peaceful protesters “thugs” and encouraging more violence against Black people.

Trump is using every possible tool in his arsenal to undermine our democracy. Voting by mail is a safe and secure way to exercise our fundamental right during a pandemic, yet the Trump administration is mounting a partisan attack on the Postal Service to undermine its efficacy and voting by mail. Furthermore, Trump’s judicial appointees are doing whatever they can to ensure that voter suppression is upheld by the courts.

Republicans have made it clear that they intend to fill the Supreme Court vacancy before the election. With the administration’s persistent efforts to undermine the democratic process, it is more than likely that the court will weigh in on election results. This term, the court will also consider the Trump administration’s challenge to the Affordable Care Act, which millions of Americans rely on for health care. Reproductive rights and many other civil rights principles and tenets hang in the balance as well.

Trump has been upfront about wanting an outcome-driven Supreme Court and he wants his nominee seated in order to influence the election. We cannot allow Trump or anyone else take away the power of our vote.

It is time to fire the politicians who have failed us and elect the ones that truly have our back. That is why in 10 states, the NAACP has launched Phase 2 of our “Black Voices Change Lives,” a historic effort to increase Black voter turnout. The campaign is recruiting community members to encourage infrequent Black voters to cast ballots this fall. According to the Pew Research Center, Black voter turnout declined in 2016 for the first time in 20 years, falling to 59.6%. This is after reaching a historic high of 66.6% in the 2012 elections. The goal of our new campaign is to increase Black turnout by more than 5 percentage points compared to 2016.

Between now and Election Day, put your plan together to vote. Make sure you are registered to vote. If you are going to vote early or by mail, know what you need to do to ensure your vote if counted. If you are voting on Election Day, take your mask, bring your ID, a chair, and food if necessary. However you vote, you cannot and must not allow anyone to turn you away.

There is too much at stake in this election, for Black people and our community. It is not just Donald Trump and Joe Biden on the ballot, it’s a decision about what kind of country we want. Whenever this feels daunting, remember that Rep. John Lewis, Justice Ruth Bader Ginsburg and countless others fought until their dying breaths to make our country live up to its ideals of fairness and equality. The least we can do to honor them is vote. Our lives depend on it.

Derrick Johnson is the president and CEO of the NAACP, America’s largest civil rights organization. Follow him on Twitter @DerrickNAACP