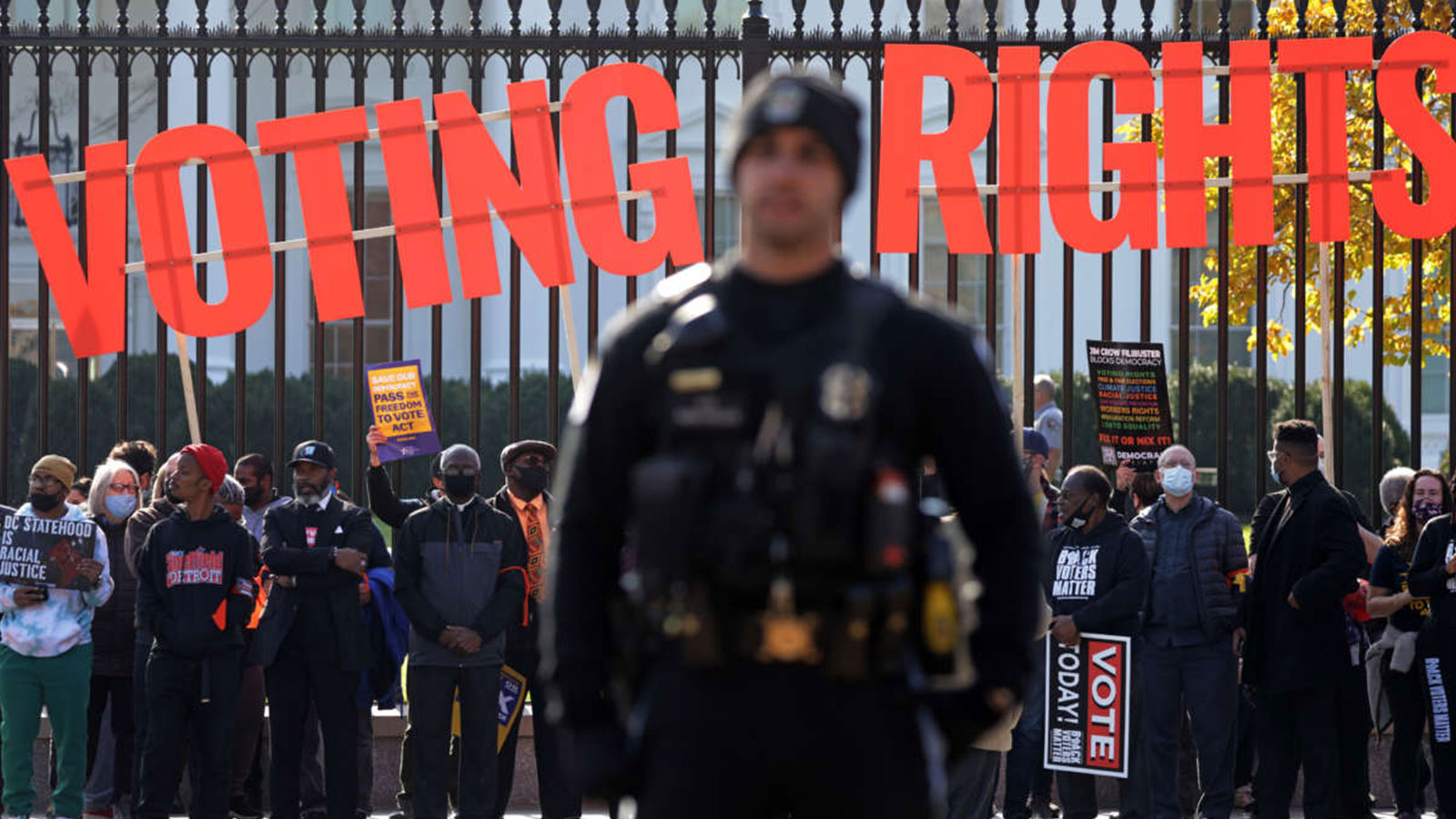 Congress must pass the John Lewis Voting Rights Act to push back against the GOP’s racist redistricting and voting laws.

While building back the nation’s infrastructure remains the focus inside the Capital Beltway, congressional inaction on voting rights has the biggest potential to tear down years of progress for Black people in this country.

Even though communities of color in cities and rural towns across the United States are organizing to fulfill the promise of the Voting Rights Act (VRA) during the 2021 redistricting cycle, the loss of the VRA’s Section 5 voting protections threatens decades of hard-fought victories for fair representation and equitable resources.

Voting rights advocates as far north as Wisconsin, and in Southern states like Georgia, Texas and Florida, are sounding the alarm: Without immediate federal action to restore the VRA, even our smallest towns aren’t safe from anti-democratic, racist redistricting that could have devastating impacts on people who simply want their voices heard.

Recently, in North Carolina, the Republican state legislature approved new maps for the U.S. House that could give white Republicans control of 11 out of 14 of the state’s districts. The erosion of Black votes and representation remains a major concern on the local level, where redistricting often receives less attention and scrutiny.

North Carolina’s Lee County, currently at the center of a decades-long gerrymandering debate, is just the latest consequence of the 2013 Shelby County decision gutting what’s known as the preclearance provision of the Voting Rights Act: Last month, Lee County’s commissioners manipulated the county’s only Black voting district and threatened to roll back Black voters’ ability to elect candidates of their choice.

The VRA’s preclearance provision, which prohibits certain jurisdictions from implementing changes affecting voting without preapproval, would have prevented such manipulation by protecting districts that allow voters of color to elect their preferred candidates.

One of 10 southern counties named for the slaveholding Confederate Gen. Robert E. Lee, the county has long elected its commissioners in an at-large system — where all the county’s voters can vote for each candidate — which all but guaranteed electoral victories for white majorities.

The erosion of Black votes and representation remains a major concern on the local level, where redistricting often receives less attention and scrutiny.

With the full protection of the VRA, the Lee County NAACP filed suit in 1989, alleging the at-large system denied Black residents a genuine opportunity to elect their candidate of choice. As a result of the VRA lawsuit, the board increased its size and changed its method of election from completely at-large to a hybrid system with a majority of single-member districts. Moreover, the county commissioners explicitly acknowledged in their 1989 resolution Lee County’s “desir[e] to increase the opportunity for Black voters to elect candidates of their choice.”

This is part of a perverse trend mirrored by states drawing new state and congressional district lines across the South, as well as the rest of the nation. In fact, GOP legislatures will finalize redistricting in 20 states covering 187 congressional districts, compared to Democrats who control the process in eight states with 75 districts.

Certain commissioners not only ignored warnings against drawing maps for partisan gain, but they also denied the public any chance to comment on changes to districts for communities of color by refusing to hold public hearings that would ensure Lee County residents could ask questions, provide alternatives or hold elected officials accountable.

Without the VRA’s federal preclearance provisions, discriminatory redistricting plans like those in Lee County cannot be stopped.

GOP legislatures will finalize redistricting in 20 states covering 187 congressional districts, compared to Democrats who control the process in eight states with 75 districts.

Black voters in Lee County, North Carolina, are not alone in their struggle. In nearby Fayetteville, ousted white politicians, unhappy with a majority-Black city council built from VRA-protected districts, are waging their own dangerous campaign to change election methods in the state’s sixth-largest city, designed to upend majority-minority districts and return the city to a racist at-large system. Pair this trend with local “prison gerrymandering” efforts that purposefully shift political power away from cities where more Black people live to smaller, majority-white prison towns where predominantly Black people are incarcerated, and once again voters of color everywhere from Mobile, Alabama, to Milwaukee, Wisconsin, are paying the political price.

These efforts to erode local Black voting power are the real-life consequences of congressional inaction. Places like Lee County, Fayetteville and Milwaukee not only risk losing the representation they deserve, but also the resources for housing, jobs, public health and environmental protections they need.

In 1965, Congress made a promise to hundreds of communities like those in Lee County. In 2021, it’s time they ensured that decades of struggle and sacrifice were not in vain.

Congress must pass the John R. Lewis Voting Rights Advancement Act to strengthen the VRA and restore its core protections, and also pass the Freedom to Vote Act as soon as possible. Robust voting rights protections are the only bulwark against racist redistricting that we’ve witnessed across the South and the latest wave of anti-voter legislation happening now across the country.