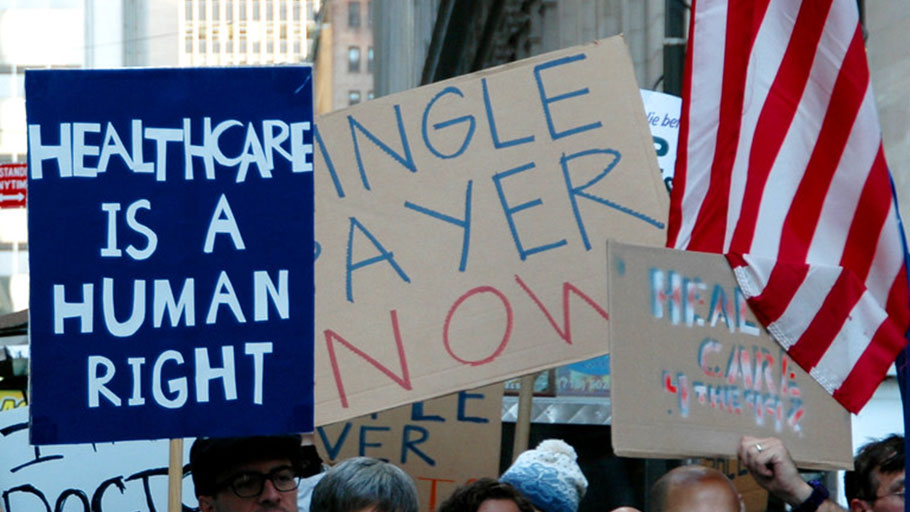 Coronavirus Makes It More Clear Than Ever: Health Care Is a Human Right

You Are Here: Home » Blog » Commentaries/Opinions » Rev Jesse Jackson » Coronavirus Makes It More Clear Than Ever: Health Care Is a Human Right

The COVID-19 crisis exposes the foolishness of pretending that health care is a private marketplace.

Who is going to pay for this?

For months that question was used as a weapon against supporters of Medicare for All. Now, it is on everyone’s mind as they worry about the costs of the testing and treatment for the coronavirus. The virus is highly contagious. We need everyone with symptoms to get tested and all with the virus to get treatment. If anyone hesitates because they fear they can’t afford the cost, they put the rest of us at risk.

No one should be worried about the costs of treatment.

Those costs, however, are going to be staggering, particularly if the fears of the administration’s leading expert, Dr. Anthony Fauci, are realized and a million or more may become infected with the disease. Hospitalization and treatment will cost hundreds of billions. The average cost of hospitalization for pneumonia patients is about $20,000, but many coronavirus patients tend to need to stay on ventilators longer and fight off more complications than pneumonia patients.

Across the country, Americans are terrified at the potential costs if they get sick. Twenty-seven million Americans have no health insurance at all. Four in 10 working Americans have a high-deductible plan that forces them to pay thousands of dollars out of pocket before they get benefit from the premiums taken out of their paychecks each week.

A 2009 Harvard Medical School study estimated that every year an estimated 45,000 people in the U.S. die because of lack of health care coverage. Many suffer because they put off necessary treatment because they can’t afford it. Now, as Rep. Ro Khanna, D-Cal., put it, “The reality is, there are a lot of people that are thinking, ‘I don’t want a couple thousand-dollar bill to get tested or get treated.’”

The rescue bill just passed by Congress covers the costs of testing. Trump promised that any cost of treatment also would be covered, but the insurance lobby immediately corrected him. Since then, under immense pressure, Cigna and Humana have joined CVS Aetna insurance in agreeing to waive patient cost-sharing on treatment for those insured.

Hopefully, this will reassure people enough that they won’t avoid getting tested and treated, posing the threat to all. But this won’t be charity. Some health-care analysts think the insurance industry could benefit from the pandemic because people generally are putting off visits to doctors and hospitals as much as possible.

In any case, insurers admit that if the costs soar they will factor it into the cost of plans next year. As Peter Lee, the head of Covered California, an independent state agency, noted, insurers are likely to seek rates next year that are double their additional costs from the virus. If costs go up 20 percent, rates could jump as much as 40 percent. That could mean, Lee warned “that many of the 170 million Americans in the commercial market may lose their coverage and go without needed care.”

The insurers will sustain their profits; it’s the patients who will suffer.

The government is investing billions of dollars to develop a vaccine for the virus, and to develop other drugs that can help treat it. Yet, because the government turns over any drug developed to the private pharmaceutical companies, Health Secretary Alex Azar — a former lobbyist for the drug companies — said he couldn’t guarantee that the treatments would be affordable. Already, as the Intercept reported, bankers are goading drug companies to prepare to raise prices to benefit from the expected demand.

The U.S. spends about twice as much per capita for its patchwork health-care system than most industrialized countries. Why were we caught with such shortages of masks, ventilators or hospital beds?

A central reason is that about $500 billion of what we spend on health care each year doesn’t go to health care. It is wasted on costly bureaucracies needed to bill the maze of private insurers or track down patients for their co-pays. It goes to hundreds of billions in profits for insurance companies and drug companies. It goes to excessive CEO salaries rising to $80 million or so a year.

At this point, the overriding imperative is that every person in the U.S. understand that they should get the testing and treatment they need. All should be reassured that their costs will be covered. Congress went part of the way with the last rescue package. It should finish the job, preferably by having Medicare pay for all the costs directly.

But we shouldn’t be satisfied with single-payer coverage just during a massive pandemic. This crisis exposes dramatically the foolishness of pretending that health care is a private marketplace. Health care is a human right. This pandemic gives ample evidence of why we need to move to a Medicare for All system where high-quality health care is guaranteed to all.

Featured image: Doctors for the 99 Percent march from Zuccotti Park to St. Vincent’s Hospital to demand its reopening and health care for all. October 26, 2011. (Michael Fleshman, Flickr).