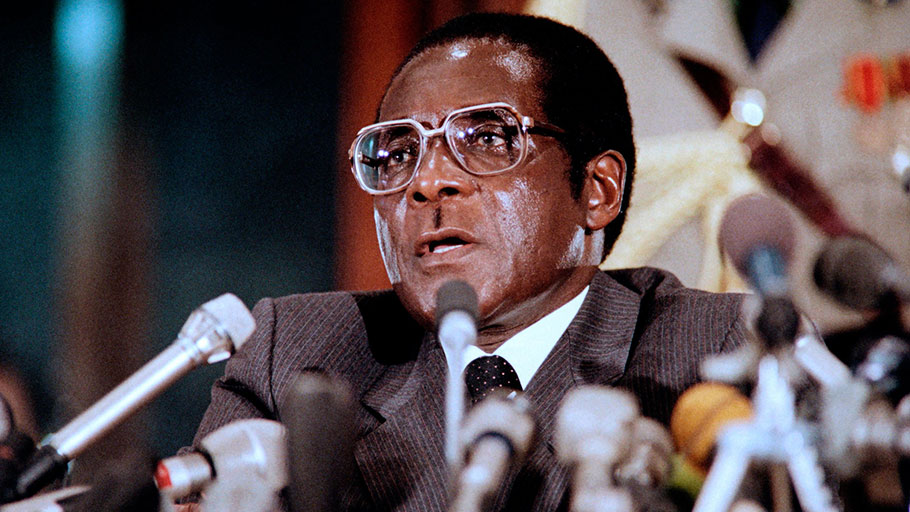 Robert Mugabe and the Fate of Democracy in Africa

You Are Here: Home » Blog » Commentaries/Opinions » Robert Mugabe and the Fate of Democracy in Africa

Robert Mugabe epitomized the difficulties of trying to revive the democratic dream after long-running despots and populists are ousted. Photograph by Alexander Joe, AFP, Getty.

By Robin Wright, The New Yorker —

In a commemorative interview on his ninety-third birthday, in 2017, Robert Mugabe, who was President of Zimbabwe at the time, reflected on his new American counterpart. “When it comes to Donald Trump, on the one hand talking of American nationalism, well, America for America, America for Americans—on that we agree,” he told state television. “Zimbabwe for Zimbabweans.”

The two men were wildly different in many ways, yet I was struck by how much they were alike when I heard that Mugabe had died on Friday. Both came to power with a fiercely populist dogma defined by victimhood and the righteousness of their truths, the facts be damned and their critics publicly shamed. Both men relied on political bases that hero-worshipped, often to the disbelief of the outside world. Both men had economic theories that defied global trends. Both men displayed demagogic narcissisms. And each reflected wider global political challenges—Trump among Western nations, Mugabe in Africa.

I interviewed Mugabe the day after he was elected, in 1980, to lead the new nation of Zimbabwe out of the ashes of Rhodesia. The election marked the formal end of a fifteen-year civil war, the British colonial era, and white minority rule in a nation where blacks outnumbered whites twenty-two to one. It also marked the virtual end to prospects of democracy in the Africa country best equipped—in education, economic prospects, and infrastructure—for independence. Mugabe ended it in a flash. “As you saw from the decision of the people, it is virtually only one party, the Patriotic Front, that is in power,” Mugabe told me. “The rest of the parties have been rejected, so we have a one-party state already.” That was patently false; other parties won forty-three of the hundred seats in parliament, in a poll tainted by voter intimidation. But Mugabe ruled under that illusion for the next thirty-seven years. In 2016, Mugabe, his megalomania seemingly having no bounds, dared to tell an African Union summit of more than fifty nations that he would rule “until God says, ‘Come.’ ”

A schoolteacher turned guerrilla, and a devout Roman Catholic turned Marxist ideologue, Mugabe didn’t last quite that long. In 2017, at age ninety-three, he was ousted by the Zimbabwean military—not over policy but to prevent him from anointing his second wife, Grace, as his political heir. By the time he retreated to their twenty-four-bedroom estate, unemployment was around eighty-five percent. The economy had steadily deteriorated under his rule. In 2009, inflation reached two hundred and thirty million percent. By 2016, a hundred-trillion-dollar banknote was worth only about forty U.S. cents. A quarter of the fourteen million Zimbabweans depended on aid just to eat.

When I lived in Africa, there was a certain class of post-colonial Africans nicknamed the WaBenzi. “Wa” was a prefix denoting a tribe. “Benzi” came from the Mercedes Benz driven by a class of kleptocratic, corrupt and exploitive politicians or businessmen. Mugabe had a fleet of Mercedes. He got to keep his bullet-proof, bomb-proof S600 Pullman Guard limo as part of his exit package in 2017, the local press reported.

On September 6th, Mugabe died in Singapore, while receiving treatment for an undisclosed illness. His death was announced in a tweet, by his successor, President Emmerson Mnangagwa. “Mugabe was an icon of liberation, a pan-Africanist who dedicated his life to the emancipation and empowerment of his people,” he wrote. “His contribution to the history of our nation and continent will never be forgotten.” And, by many, forgiven.

Mugabe epitomized the difficulties of trying to revive the democratic dream after long-running despots and populists are ousted. Vested interests, corrupt political parties, and patronage systems that have propped up the autocrats for decades are too hard to purge. Mnangagwa, one of Mugabe’s closest political cronies for four decades, has largely perpetuated his policies. “Zimbabwe continues to be a tyranny,” John Campbell, a former U.S. Ambassador in Africa now at the Council on Foreign Relations, told me. “It is difficult to bring about a genuine change of regime. For one thing, there is an apparatus of repression already in place. Congo is perhaps one of the best examples—Zimbabwe another. It remains to be seen what the outcome will be in Sudan.” There’s also the danger, with the marginalization of opposition, that there’s little to replace them. “Rather than a change of regime, perhaps more common is an erosion of government authority, the emergence of ‘ungoverned spaces,’ ” Campbell said. “They are, in effect ‘governed,’ but by local authorities or groups, not the ostensible government.”

The state of democracy on the continent is hopeless in some nations and hopeful in others. There are fifteen leaders in Africa who have ruled for terms between twenty-seven years and forty-one years—in Angola, Benin, Cameroon, Chad, Congo, Equatorial Guinea, Eritrea, Gabon, Guinea, Ivory Coast, Malawi, Sudan, Togo, and Uganda. In Uganda, Yoweri Museveni has been in power for a third of a century, since 1986, after overthrowing the notorious dictator Idi Amin. In Cameroon, President Paul Biya, who has been in office for thirty-six years, was reëlected to a seventh term in October. Teodoro Obiang Nguema has been the President of Equatorial Guinea for forty years—since he ousted his uncle. Many of them are doddering. In 2015, close to the end of his presidency, Mugabe read the same state-of-the-nation speech to parliament, word for word, twice in three weeks.

Between 2015 and 2017, Africa’s autocratic countries became more repressive, Nic Cheeseman, a democracy expert at the University of Birmingham, concluded in a study of Africa this year. Since 2015, Africa has witnessed “an overall deterioration in the quality of political and economic transformation and governance.” In other countries, democratic reforms are moving slowly or stalled, “suggesting democratic difficulties rather than democratic collapse,” he wrote. Today, Africa has almost the same number of ‘defective democracies’ (fifteen) as there are hardline autocracies (sixteen). “If current trends continue, the continent’s future will be characterized by a set of entrenched authoritarian states sitting side by side with a set of nascent democracies,” Cheeseman’s study concluded.

Other experts are more hopeful, citing the political fate of Mugabe—who started out as a political prisoner famed for getting three college degrees behind bars and later rose to lead a liberation movement—as a trend line. “Encouragingly, today’s Africa is trending away from the ‘president for life’ model. Mugabe’s unfortunate final years in office helped spur this trend,” Michael Morrow, a U.S. diplomat now detailed to the Woodrow Wilson Center’s Africa Program, told me. After Mugabe’s forced resignation, millions of Zimbabweans poured out on the streets to celebrate. At Zimbabwe’s 2018 Presidential election, Mugabe told reporters that he was voting for the opposition—and against Mnangagwa, his former defense minister, and intelligence chief.

“Africa’s trajectory on democratization, while uneven, is generally positive,” Morrow said. “As the post-Mugabe experience in Zimbabwe has shown, the continent still faces great challenges in achieving good governance, countering corruption, and giving unfettered voice to civil society. The extent and speed with which Africa addresses these challenges will determine its success—or failure—in closing the competitiveness gap with a fast-globalizing world.”

In Washington, the Trump Administration fudged its reaction to Mugabe’s death. It noted Mugabe’s role in liberating Zimbabwe and extended condolences to his supporters, even as it cited his “gross economic mismanagement” that “impoverished millions and betrayed his people’s hopes” for their nation. An e-mailed statement added, “We continue to support the aspirations of the Zimbabwean people for a better, more prosperous future.” Unfortunately, the prospects for Zimbabwe today seem as remote as they were the day after Mugabe was elected, almost four decades ago.