You Are Here: Home » Commentaries/Opinions » Stephen Miller is no outlier. White supremacy rules the Republican party 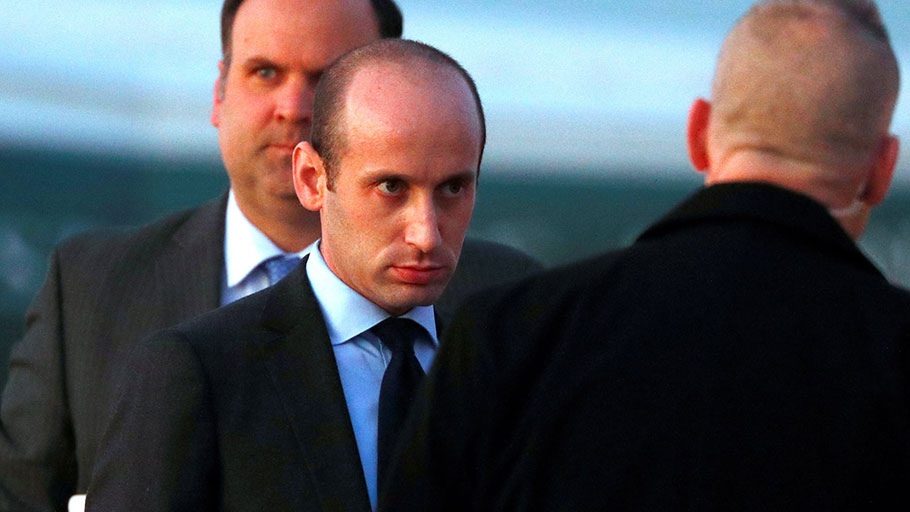 It is time for Democrats to face and name the ugly truth: the Grand Old Party is a party steeped in white supremacy.’ Photograph: Tom Brenner/Reuters

Republican voters made Trump the white-supremacist-in-chief. That’s why a resignation from Miller wouldn’t change much.

By Cas Mudde, The Guardian —

The emails, which were leaked by former Breitbart editor Katie McHugh and predate Miller’s period in the White House, show Miller’s obsession with immigration and his seemingly successful attempts to get Breitbart editors to write anti-immigration stories, some of which were based on openly white nationalist sources like American Renaissance and V-Dare.

The widespread public outrage in response to the revelations is understandable. Miller is the longest serving senior advisor to President Trump who is not related to the president, and is believed to be the architect of the White House’s draconian anti-immigration policies, which doesn’t just target “illegal immigration” but also aims to return to the country to the infamously racist immigration policy of the early 20th century.

In its response to the leak, the White House tried to discredit the source, SPLC, which has had some internal and external problems recently, but is overall a very reliable authority on the US far right (full disclaimer: I regularly collaborate with the SPLC). One White House spokesperson went full “alternative facts” by accusing SPLC of antisemitism, because Miller is Jewish. By doing so, the White House displayed a complete lack of understanding about what antisemitism is, which is no surprise, given that Trump considers himself “the least antisemitic person you’ve ever seen”.

The Democratic responses were predictable and swift as well. Of all the 2020 candidates, Julian Castro went the furthest in condemning Miller – he called him a “neo-Nazi” – but all agreed that he should resign from the White House.

But would Miller’s resignation change anything? While Miller might be behind the concrete policies that harm immigrants, he is not the main white supremacist in the White House. And Trump can easily find someone else to do Miller’s work, particularly now that almost the whole Republican party has fallen in line with their president.

It also externalizes white supremacy, as if it lives in the margins. But it has been hiding in plain sight within the Republican Party for decades. Miller wrote the emails to Breitbart when he was still an aide to Senator Jeff Sessions, who has been a consistent voice of white supremacy in Congress since 1997. And the Alabama Senator was not alone in Congress either. Representative Steve King has been the most open and unapologetic voice for the cause since 2003. Others, like representatives Louie Gohmert, Paul Gosar, Tom Tancredo and Dana Rohrabacher, might not be as open in their support, but they all encourage white nationalism to varying degrees.

But white supremacy in the Republican party is not limited to just these individual congressmen and women. It runs much deeper than them. White supremacy was at the core of the “Southern Strategy”, dating back to the unsuccessful 1964 presidential campaign of Barry Goldwater, which was formative for the future conservative movement. Perfected by President Richard Nixon, with the help of speechwriter Pat Buchanan, dog whistles to white supremacy have been at the heart of virtually every Republican campaign since the 1970s.

Talking of Buchanan, more than 25 years ago he gave his now famous “culture war” speech at the 1992 Republican convention. While the term has become mainly linked to the religious right, Buchanan is at least as much a white supremacist as a Christian fundamentalist. In many ways, he is the intellectual father of the Trump administration, personifying Mike Pence and Donald Trump in one.

This is why calling for Stephen Miller’s resignation wouldn’t change much. Neither Miller nor Bannon “made” Trump the white-supremacist-in-chief. And Trump is not the only problem either, as Joe Biden seems to believe. He won the Republican primaries, and presidential elections, not despite white supremacy but because of it.

In short, it is time for Democrats to face and name the ugly truth: the Grand Old Party is a party steeped in white supremacy. It is the basis of its electoral support and this will not change in the near future. By focusing on the most brazen examples, like Stephen Miller, Democrats strengthen the misguided belief that the Republican party is a good party with some bad apples. Ultimately, this will help the Republicans more than the Democrats.

Black millennials who refuse to vote are falling for a political fraud
We Need Your Support — Donate, Share, Sign-Up Ways to Support