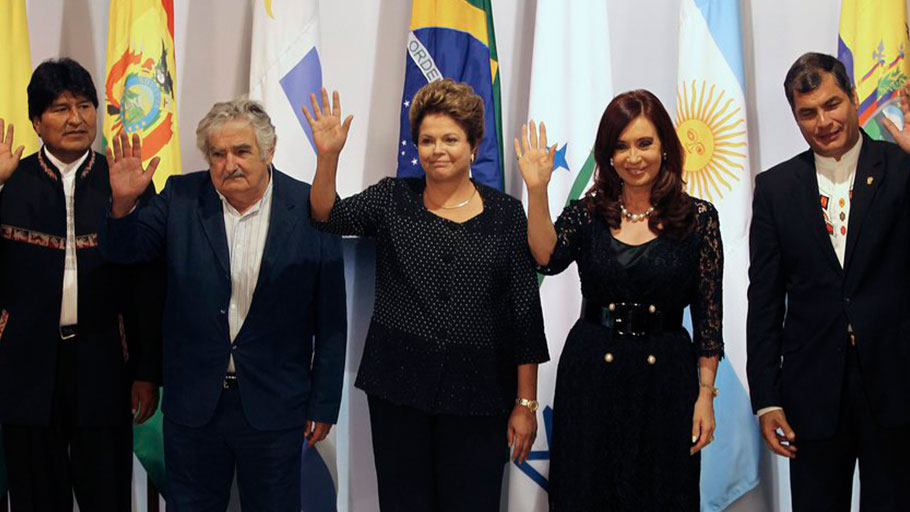 The Strategic Challenge for the Latin American Left

You Are Here: Home » Blog » Commentaries/Opinions » The Strategic Challenge for the Latin American Left

Mass-Media has become the main opposition to the progressive governments of the region.

After the long and sad neoliberal night of the 1990s – which broke entire nations like Ecuador – and since Hugo Chávez won the Presidency of the Republic of Venezuela at the end of 1998, the rightist governments of the continent began to be overthrown like houses of cards, bringing Popular governments and aligned with ‘Socialism of Good Living’ across our America.

In its heyday in 2009, out of ten Latin American countries in South America, eight had leftist governments. In addition, in Central America and the Caribbean, there was the Farabundo Martí Front in El Salvador, the Sandinistas in Nicaragua, Álvaro Colom in Guatemala, Manuel Zelaya in Honduras, and Leonel Fernández in the Dominican Republic. In countries like Guatemala, with Álvaro Colom, or Paraguay, with Fernando Lugo; it was the first time in history that the left had come to power, and in the last case, broken centuries of constant bipartisanship.

In May of 2008, the Union of South American Nations, or (UNASUR), was born and in February 2010, the Community of Latin American and Caribbean States (CELAC) was created with 33 members. Of the 20 Latin countries of the CELAC, 14 had Left governments, that is, 70 percent.

The first part of the 21st century has undoubtedly meant years of advancement. The economic, social and political advances were historic and amazed the world with a climate of sovereignty, dignity, autonomy, with our own presence on the continent and in the whole world.

Latin America didn’t live through a time of change, but a real change of the times, which also substantially changed the geopolitical balance of the region. For this reason, for the de facto powers and hegemonic countries, it was essential to put an end to these processes of change that favored the vast majorities, and that sought a second and definitive regional independence.

Although the government of Hugo Chávez had to endure a failed coup d’état as early as 2002, it was really since 2008 that undemocratic attempts to end the progressive governments intensified, as was the case of Bolivia in 2008, Honduras 2009, Ecuador 2010, and Paraguay 2012. Four attempts at destabilization, two of them successful – Honduras and Paraguay – and all against governments of the left.

Starting in 2014 and taking advantage of the change in the economic downturn, these disjointed destabilization efforts are consolidated and constitute a real “conservative restoration,” with never-before-seen right-wing coalitions, international support, unlimited resources, external financing, and so on. The reaction has since deepened and lost any limits or scruples. Now we have the economic boycott and harassment of Venezuela, the parliamentary coup in Brazil, and the judicialization of politics – ‘lawfare’ -, as shown by the cases of Dilma and Lula in Brazil, Cristina in Argentina, and Vice President Jorge Glas in Ecuador. The attempts to destroy UNASUR and neutralize CELAC, are also evident and, not infrequently, brazen. Not to mention what is happening in Mercosur. The failure of the FTAA at the beginning of this century looks to be overcome through the Pacific Alliance.

In South America, at present, only three progressive governments remain: Venezuela; Bolivia; and Uruguay. The eternal powers that have always dominated Latin America and that plunged it into backwardness, inequality, and underdevelopment, return with a thirst for revenge, after more than a decade of continuous defeats.

The Central Pillars of The Conservative Restoration’s Strategy

The reactionary strategy is carried out regionally and is primarily based on two axes: the supposed failure of the left economic model, and the alleged lack of moral strength in the progressive governments.

Regarding the first axis, since the second half of 2014, due to an adverse international environment, the entire region suffered an economic slowdown that turned into a recession during the last two years.

The results are different between countries and subregions, reflecting the different economic structure and applied economic policies, but the economic difficulties of countries like Venezuela or Brazil are taken as an example of the failure of socialism, even when Uruguay, with a left government, is the most developed country south of the Rio Grande, or when Bolivia has the best macroeconomic indicators on the planet.

The second axis of the new strategy against progressive governments is morality. The issue of corruption has become the effective tool to destroy the national-popular political processes in Our America. The emblematic case is that of Brazil, where a well-articulated political operation succeeded in removing Dilma Rousseff from the Presidency of Brazil, only to be shown to have nothing to do with the issues that they attributed to her.

There is great global hypocrisy surrounding the fight against corruption.

The Left: Victim Of Its Own Success?

The left is also probably a victim of its own success. According to the Economic Commission for Latin America and the Caribbean (ECLAC), almost 94 million people were lifted out of poverty and joined the regional middle class during the last decade, with the vast majority being a result of the policies of leftist governments.

In Brazil, 37.5 million people stopped being poor between 2003 and 2013, and are now middle class, but those millions were not a mobilized force when a Parliament that itself is accused of corruption, dismissed Dilma Rousseff.

We have people who overcame poverty and now – for what is often called objective prosperity and subjective poverty – despite having significantly improved their income level, ask for much more. They feel poor, not in reference to what they have, worse still to what they had, but to what they aspire.

The left has always struggled against the current, at least in the Western world. The question is, is the left fighting against human nature?

The problem is much more complex if we consider the hegemonic culture constructed by the media, in the Gramscian sense, that is, to make the wishes of the great majorities in line with the interests of the elites.

Our democracies should be called mediated democracies. The media are a more important component in the political process than the parties and electoral systems; they have become the main opposition parties of the progressive governments, and they are the true representatives of business and conservative political power.

It does not matter what best suits the majorities, what has been proposed in the election campaign, and what the people – the main actor in every democracy – has decided at the polls. The important thing is what the media approve or disapprove of in their headlines. They have replaced the Rule of Law with the State of Opinion.

Is there a “Strategic Challenge?”

The regional left faces the problems of exercising – or having exercised – power, often successfully, but exhaustingly.

It is impossible to govern and make the whole world happy, even more, when so much social justice is required.

We always have to be self-critical, but it’s also about having faith in yourself.

The progressive governments are under constant attack, the elites and their media will not forgive any error, they seek to lower our morale, make us doubt our convictions, proposals and objectives. Therefore, perhaps the greatest “strategic challenge” of the Latin American left is to understand that every transcendental work will have errors and contradictions.