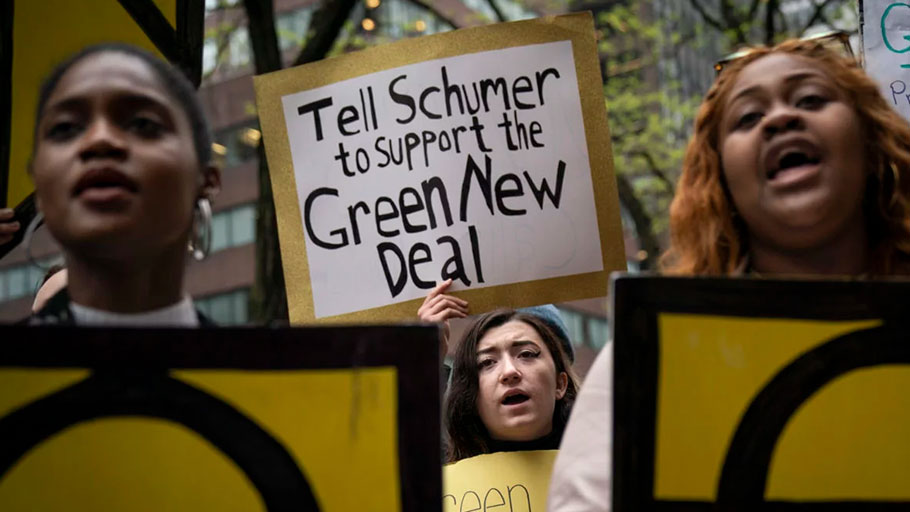 The Green New Deal Can Help Us Fight White Supremacy

You Are Here: Home » Blog » Commentaries/Opinions » The Green New Deal Can Help Us Fight White Supremacy

We had a direct existential threat with…Nazi Germany,” Rep. Ocasio-Cortez said at a 2018 event. “We chose to mobilize our entire economy…. We have to do the same thing in order to get us to 100 percent renewable energy.” She was promoting a Green New Deal, but her war analogy eerily fit our current political situation.

The left is facing a two-front struggle: On one side is capitalism wrecking the planet; on the other, a rising fascism stoking people into a fever of racism and xenophobia. How do we face this?

The Green New Deal can help us fight both crises — global warming and white supremacy. The mass mobilization that democratic socialists like Sen. Bernie Sanders call for demands a deep transformation that is cultural and economic. It can help end the cycle of violence in poor communities of color and help end “deaths of despair” in poor white ones. It might even ease white anxiety about a multicultural future. The Green New Deal, or a similar project, has the potential to bring society together in order to face humanity’s greatest enemy — a catastrophe of our own making.

Tent cities. Boarded up homes. Homeless families sleeping on church pews. Gang violence. Whether in the 2013 opioid documentary Oyxana, studies from the Centers for Disease Control and Prevention on inner city trauma or in the U.N.’s 2017 report on poverty, we see the destruction that is for many what is left of the American Dream.

Whole swaths of white America, afraid they are being left behind (by capitalism), have channeled their despair into drug misuse or rage. In 2015, researchers Anne Case and Angus Deaton discovered that since 1999, an increasing number of middle-aged white Americans have been dying from suicide, drugs like opiates and alcoholism. They called them “deaths of despair” because the cause was not just the presence of drugs but the absence of social connection. Many people living in small towns saw no future, no jobs and no way out. Friends died. Family died. They were numb with fatalism.

For others, instead of destroying themselves, their rage turned outward and they vowed to destroy the liberal America that they believed had betrayed them. White supremacist violence made headlines in 2017’s Unite the Right Rally and 2019’s El Paso mass shooting, but they were the tip of the iceberg. Beyond those acts of public violence, the FBI made arrests on roughly 100 domestic terror plots between October 2018 and late July 2019 alone. Meanwhile, 11 million white Americans hold an “alt-right” worldview, seeing themselves as the victims of a rising tide of people of color and the liberal elite who empower them.

And yet the masses of people of color do not hold political or economic power, and suffer even deeper, generationally entrenched poverty. Even with the recent decline in the poor from 39.5 million people in 2017 to 38.1 million in 2019, the effect of legal segregation and real estate red-lining led to neighborhoods of color becoming locked in cycles of violence and loss. Although gang violence has decreased in recent years, gangs still spray the streets with bullets, sometimes aiming at a rival and killing children in the way. Black Panther Huey Newton called this nihilistic rage turned inward “reactionary suicide.” The pressure of poverty and hopelessness explodes in the faces of those who are already its victims.

Whether it is opiate addiction in Appalachia or entrenched inner-city poverty, isolated and isolating pain has destroyed lives. The social strain of failing at the “American Dream” has left millions in despair; they don’t vote or hope. They need a new role in a new world.

When renewable energy workers nail down solar panels in West Virginia or manage wind turbines in Texas, they are at the future’s edge, putting in place technology to harness the infinite power of nature’s restless motion. Today, 3.2 million green energy workers follow the flow of wind and blast of sunlight. Yet they are not enough to cut the carbon in the atmosphere and avert the worst of global warming.

The Green New Deal is solar panels and geothermal pumps, wind turbines and retrofitted buildings, tidal power and burning biomass. It is rural land, small towns and big cities shining with new technology put in place by a massive workforce. A 2014 report from the Political Economy Research Institute envisioned 2.7 million new jobs a year to cut carbon emissions by 40 percent in 20 years. Sen. Bernie Sanders updated this blueprint in his 2019 Green New Deal Proposal, where the U.S. would transition to renewable energy in a decade and create 20 million jobs. In addition to mitigating grave damage to the planet, a Green New Deal could save our nation from imploding. If it included a form of affirmative action, one based on race and class to intervene in the cycle of poverty, the Green New Deal could give a future to people who currently have little hope. Now they could earn a decent living. Now their lives would be connected to an important broader cause — to the future of humanity.

The last time labor was mobilized on this mass scale was during World War II, and the U.S. government educated the newly thrown-together workforce to set aside differences for a larger, common good. It made films in the 1940s like Don’t Be a Sucker and The House I Live In with Frank Sinatra that warned against homegrown racism. Rosie the Riveter and United We Win posters were plastered on stores, trains and buses to reinforce the new anti-racist social norm.

It wasn’t pure, by any stretch of the imagination. The U.S. still had segregated troops. The South still had Jim Crow. Women faced wholly legitimized harassment, violence and glass ceilings. But it was the beginning of a national shift toward racial and gender integration.

The 21st-century Green New Deal would need a similar — in fact, a much deeper — commitment to a new labor integration. It has to follow through on the promise that the future has a place for everyone, especially including the country’s most marginalized people. One route to such a transformation was mapped by social psychologist Henri Tajfel in his social identity theory. The theory argues that we must decenter materialism, white supremacy and patriarchy; meanwhile we must center labor, specifically working in green energy to save the planet. We must encourage the sense of a collective mission, as people accomplish the Herculean task of healing a damaged Earth.

“Like all true Americans, my greatest desire is for complete victory over the forces of evil,” wrote James G. Thompson to the Black newspaper The Pittsburgh Courier. “Being an American of dark complexion … these questions flash through my mind. ‘Should I sacrifice my life to live half American?’”

Today, the Green New Deal needs a Double Victory campaign, where we triumph against a capitalism killing the planet and the fascism rising at home.

Thompson inspired the Double V campaign that stood for victory against fascism abroad and racism at home. When Black soldiers wanted their rights, they had to struggle against the very nation whose uniform they wore to get them. But they didn’t start from scratch. A groundwork was laid in the mass mobilization of labor. Today, the Green New Deal needs a Double Victory campaign, where we triumph against a capitalism killing the planet and the fascism rising at home. The Green New Deal could offer millions the chance to work to accomplish a common goal.

Calling people from the small towns, the trailer parks and public housing, the suburbs and the cities into a collective Earth front would give us a chance to win breathing space for our species. We could work to save what’s left of the planet. We could save ourselves from our own history.

This story is part of Covering Climate Now, a global collaboration of more than 220 news outlets to strengthen coverage of the climate story.