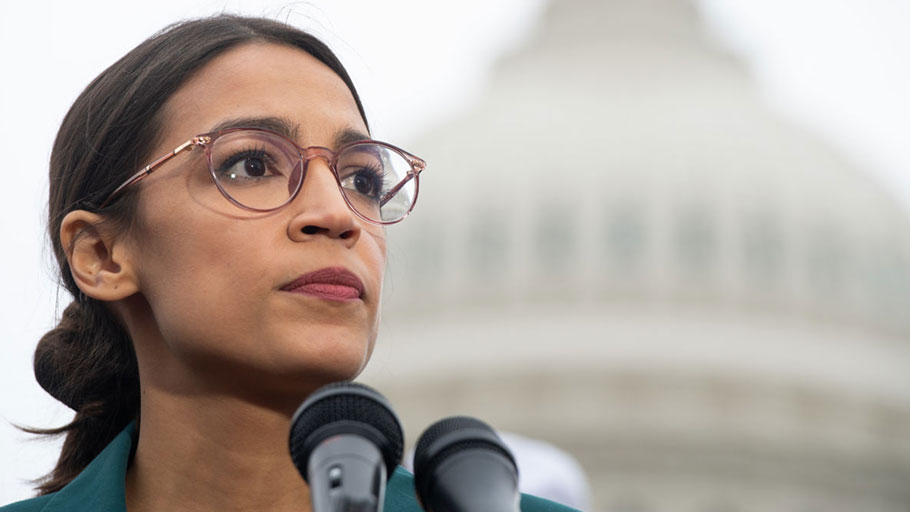 The Green New Deal Must Transform the Economy

You Are Here: Home » Blog » Commentaries/Opinions » The Green New Deal Must Transform the Economy

Rep. Alexandria Ocasio-Cortez and Sen. Ed Markey introduced the Green New Deal on February 7, a resolution that deserves praise for putting forth the boldest climate change proposal in U.S. history.

Considering two recent projections of catastrophic climate change — namely scientists’ warning of a runaway “hothouse Earth” scenario and the Intergovernmental Panel on Climate Change (IPCC) special report detailing the impacts of a 1.5 degree Celsius (1.5°C) rise in global temperatures — an increasing number of scientists and activists are calling for a dramatic policy response to tackle climate change. The IPCC specifically calls for “rapid, far-reaching and unprecedented changes in all aspects of society” to prevent the 1.5-degree scenario.

Although currently limited, as Representative Ocasio-Cortez acknowledges, the Green New Deal is the only climate change proposal to date that approximates what is necessary to avert catastrophe. The deal deserves widespread support. The left’s aim should be to identify where it does not go far enough, and to push for amendments and improvements early on to create a deal that is truly transformative. In addition to the proposals in the resolution, several additional measures would help to more rapidly, directly and effectively reduce greenhouse gas emissions. Two achievable and transformative additions to the deal are considered here: nationalizing and decommissioning fossil fuel companies, and work-time reduction.

A concerning omission from the current Green New Deal is a commitment to phasing out fossil fuels: net-zero emissions are not the same thing. While avoiding specific targets to reduce fossil fuel use may appease politicians with ties to the industry, there is good reason to be skeptical of approaches that rely on increasing investments in carbon sequestration and renewable energy without also specifically creating targets to reduce fossil fuel use.

Any successful energy transition cannot just be energy addition: We must explicitly plan how to phase out fossil fuels, not just grow renewables. In addition, there are significant unknowns, costs, risks and barriers to widespread deployment of proposed carbon capture and sequestration strategies. To rely on these approaches, instead of directly reducing fossil fuel use, means a slower and less effective response. Others have proposed that the fastest and most effective way to phase out fossil fuels is through buying out fossil fuel companies.

Nationalizing and decommissioning fossil fuel companies is a just and effective means to reduce fossil fuel development while growing renewables and further developing carbon sequestration strategies. One way to nationalize fossil fuel companies in the U.S. is by creating a Social Energy Fund to purchase fossil fuel companies at market value. Purchasing 51 percent of fossil fuel shares would cost about $410 billion. This cost is small compared to the long-term costs that climate change will incur. Nationalization would allow the state to support those formally employed in the fossil fuel industry, especially through guaranteed retraining and re-employment in, for example, alternative energy industries.

Considering that a third of the world’s wealth is currently tied up in fossil fuels, state intervention now to buyout fossil fuel companies could avert another global financial crisis. Government buyouts are not uncommon and have occurred throughout U.S. history with banks, companies producing products for war, and the buyout of tobacco companies that took place between 2004 and 2014.

We must explicitly plan how to phase out fossil fuels, not just grow renewables.

Without nationalization, there is no reason to believe that fossil fuel companies will stop further exploration and extraction. Thus, fossil fuel nationalization should be adopted as an essential strategy for a transformative Green New Deal that replaces fossil fuel energy with renewable energy. In addition, relying on carbon sequestration to offset continued fossil fuel use is a higher risk, slower and likely much less effective strategy.

An additional consideration for the Green New Deal is the fact that it is very unlikely that renewable energy can supply current, let alone increasing, total energy demands because, among other reasons, the amount of energy return on energy invested in solar and wind is lower than fossil fuel-based sources. Thus, a transition to 100 percent renewable energy will likely require decreases in total energy use. For this reason, among others, the Green New Deal should not aspire to be a new growth engine. “Green growth” is a myth and deep emissions reductions would require overall economic “degrowth.” This future should be embraced and does not require neoliberal austerity. In fact, many consumption-conserving policies are in line with left-wing goals, including a shorter workweek.

Work-time reduction (WTR) is a long-standing goal of the socialist movement. Shorter working hours have numerous social benefits and long working hours are associated with many negative health effects, including higher smoking rates and less sleep. One central social benefit of WTR is absorbing structurally unemployed labor, the reason why “work sharing” is used as a synonym. The most important social benefit for socialists is the “realm of freedom” WTR opens for creative and autonomous activity. WTR can be combined with a job guarantee, as proposed in the Green New Deal’s social goals.

WTR also has major climatic benefits. Shorter working hours are associated with lower energy use and carbon emissions. For example, among Organization for Economic Cooperation and Developmentcountries, those with shorter working hours have significantly lower carbon emissions and ecological footprints. If the U.S. chose to use productivity gains for WTR instead of for more production, it would consume around 20 percent less energy. If working hours were reduced 0.5 percent annually for the next century, it would “eliminate about one-quarter to one-half, if not more, of any warming that is not already locked in.”

Fossil fuel nationalization should be adopted as an essential strategy for a transformative Green New Deal.

There are many ways to reduce working hours, including more vacations, paid maternity and paternity leave, and early retirement. One especially appealing option is a four-day workweek. Another path adopted in the Netherlands allows individuals to adjust weekly working hours. Those who decide to work part time have the same rights as those who work full time. Dutch workers are also able to take leave from work without penalty, funded by a Life Course Savings account.

Work-time reduction is a necessary but not sufficient change for a truly decarbonized economy. For one, policies like advertising limits and regulation and other society-wide sustainable consumption strategies can address the possible threat of more energy-intensive activities during expanded leisure time. Further, a sustainable society would also invite qualitative changes in the nature of work itself. WTR too requires qualitative assessments of jobs. For example, so much labor power today is wasted in “bullshit jobs,” or jobs which even those who perform them deem unnecessary. In the long term, the Green New Deal should strive to replace these jobs with climate jobs and free people from useless toil. Because evidence shows WTR to be an effective approach to reach both the social and climate goals in the Green New Deal, it should be included as a central strategy.

Moving Forward and Responding to Opposition

As record levels of U.S. citizens believe in climate change and that addressing it is personally important to them, now is a critical time to support the Green New Deal. It polls well, especially among young people. The Green New Deal is an unprecedented proposal and would represent an important step for avoiding catastrophic climate change and addressing inequality in the U.S. However, it should not be a compromise to appease fossil fuel interests through indirect, slower and less effective measures that avoid purposeful reductions in fossil fuels. Nationalizing fossil fuel companies is a promising strategy to immediately reduce fossil fuel consumption. The Green New Deal should also embrace WTR, which represents an effective strategy to reduce greenhouse gas emissions with numerous social benefits, including more leisure time and lower unemployment rates.

There is no doubt the Deal will face fierce opposition moving forward. Two framings of the Deal are particularly misleading, and serve to protect the vested interests that benefit from current levels of social inequality and continued fossil fuel use.

First, critiques focused on cost should be ignored. Climate change inaction will be far more expensive than any form the Green New Deal takes. For example, climate-change-related impacts caused $91 billion in damages in 2018 and, if we experience extreme warming later in the century, climate change is expected to cost the U.S. economy $500 billion annually. Because climate impacts, and the lives and costs associated with those impacts, will increase with every year we fail to implement effective policies, there is no excuse not to move forward and invest heavily in the Green New Deal. While it deserves full support, we should also keep pushing the deal and future climate proposals and policies to be as swift, direct, just and effective as possible.