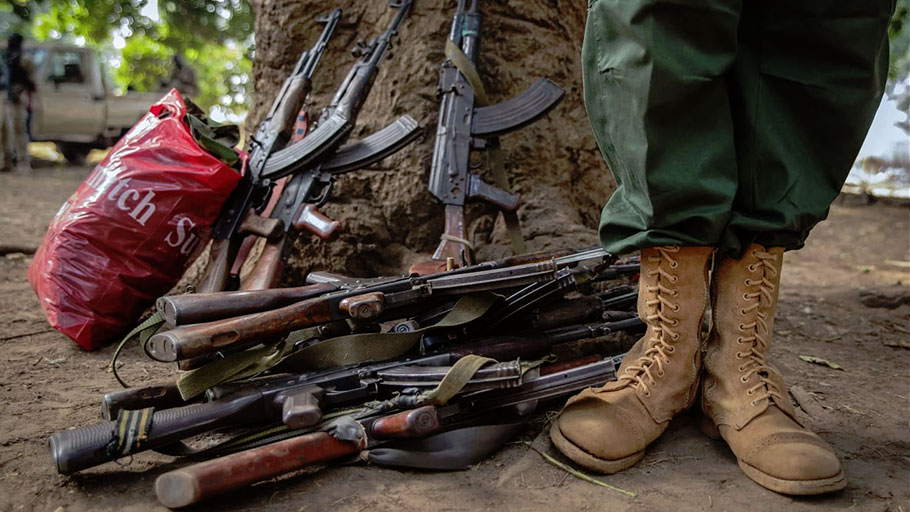 An estimated 380,000 people have been killed in South Sudan, where most of the weaponry in the civil war is small arms. The job of CAR is to find out where they came from.

By Justine Fleischner, The Daily Beast —

It was an early morning in June 2017, our last day in rebel-held Kajo Keji, South Sudan. We had spent the past three nights sleeping on the floor of an emptied school, which had become the makeshift local headquarters for the Sudan People’s Liberation Army in Opposition (SPLA-IO). At the time, fighting was still going on against the government of South Sudan.

The country’s latest civil war has been one of the most violent on the continent, with a death toll now believed to be on par with Syria. Over 380,000 South Sudanese lives have been lost and one in three have been displaced from their homes, leaving traditional farmsteads to waste and thereby magnifying the hunger epidemic across the country.

This was the case in Kajo Keji, which had been largely untouched by conflict until mid-2016, when a regionally negotiated and internationally backed peace agreement spectacularly failed. Despite all of these facts, the U.N. Security Council had failed to impose a global arms embargo until July 2018, allowing the South Sudanese government and its allies to freely purchase deadly weaponry throughout the height of the conflict.

What was in place was a longstanding European Union arms embargo, and there were scandalous rumours of its violation, mainly by Uganda on behalf of South Sudan, the government’s closest ally.

My colleague and I from Conflict Armament Research (CAR) were in Kajo Keji, along the border with Uganda, in part to see whether or not there was any evidence to substantiate these claims. CAR undertakes this work globally in order to determine sources of illicit supply and provide policy makers with the evidence they need to impose arms embargoes and other measures designed to curtail illicit weapon flows more effective.

With the SPLA-IO, we physically inspected dozens of weapons and hundreds of rounds of ammunition. We took apart their rifles, photographing serial numbers and factory marks, as well as the ammunition contained in the weapons’ magazines. Such details are often critical to determine provenance and trace back the chain of custody.

Our findings from Kajo Keji and numerous other inspection sites with forces on all sides were published Thursday morning.

Our four-year investigation, “Weapon Supplies into South Sudan’s Civil War: Regional Retransfers and International Intermediaries,” details a number of violations that have taken place, as well as the actors and intermediaries involved.

One of the most significant investigations laid out in the report details the diversion of European manufactured ammunition purchasd by Uganda to South Sudan.

Just as we were preparing to leave Kajo Keji, the commander called us over as a young soldier approached bearing one final gift: the lid of an ammunition crate they had captured weeks earlier. We had been asking for ammunition packaging for three days; but when ammunition is captured, critical identifying information contained on the packaging is often discarded. The soldiers only need the ammunition after all.

We quickly photographed both sides of the lid, packed up our cameras, and threw our packs into the back of the pickup that would take us out of Kajo Keji. It wasn’t until much later that we realized this was the most important item we had documented on the trip—providing much-needed evidence to further our investigations into these claims.

The packing slip provided proof that, while the ammunition dated from the Soviet era, it had been exported in 2015. This single piece of information would help us piece together a critical investigation that had been stalled for months.

Early in the conflict, a U.N. report had alleged that Uganda supplied weapons, including ammunition purchased legally from Bulgaria, to South Sudan. Since 1994, the E.U. has forbidden all arms exports to Sudan, and subsequently to South Sudan. But without any physical evidence to confirm Uganda’s re-export of materiel to South Sudan, weapon shipments from Bulgaria and other E.U. states to Uganda had continued.

We had previously obtained letters exchanged between the South Sudanese and Ugandan governments arranging for these transfers, including draft flight landing requests for air deliveries from Bulgaria to Uganda. But despite the paper trail, there was still no physical trace of the Bulgarian ammunition ending up in South Sudan.

Then another critical piece of the puzzle appeared. A soldier we had met in February in Sudan’s Blue Nile State (some 900 km from Kajo Keji) sent us a photograph of an identical crate containing Soviet-era ammunition captured from a force allied to the South Sudanese government. The crate’s markings listed the exporter: a Bulgarian company and the same company that was named on the commercial and flight documents we had previously obtained. The lot numbers stencilled onto the crates found in Blue Nile and Kajo-Keji were only four digits apart, indicating an identical calibre of ammunition, produced at the same factory, in 1956.

This might explain why we weren’t seeing more recently manufactured Bulgarian ammunition in circulation in South Sudan. Although exported from Bulgaria, the ammunition wasn’t Bulgarian. The crates contained much older Soviet ammunition, which had been repackaged for export in 2015, a common practice in many arms-exporting countries.

Collectively, the packing slips, flight details, and contract documents confirmed the diversion of this ammunition from Uganda to South Sudan and subsequently into neighbouring Sudan. There are currently no prohibitions on arms transfers to Uganda, and we have no reason to believe the Bulgarian government or Bulgarian company were aware that the ammunition would be re-transferred in violation of the EU embargo.

This is just one instance of many potentially illicit transfers detailed in our report, which highlights gaps in due diligence standards prior to export and the importance of post-export checks to ensure equipment is not diverted to unauthorized end users.

Arms embargoes are only effective when there is sufficient monitoring and enforcement in place. States that impose such restrictions must increase scrutiny of their own weapon exports, the actors involved, and what happens to the weapons once they have been delivered.

Our investigations further show that a private company with affiliates in Israel, Uganda, and the United States provided the South Sudanese army with a military aircraft, which was originally shipped out of Illinois, and a surveillance aircraft made in Austria. We discovered official export licenses granted to an offshore company controlled by an arms dealer, who the U.N. had publicly named a decade earlier for involvement in weapon shipments to Uganda that were diverted on to Charles Taylor’s regime in Liberia.

For now, a new peace agreement and a ceasefire in South Sudan—the 12th of the current conflict—is tentatively holding, though sporadic fighting continues.

Effective arms embargo monitoring and enforcement may not silence the guns, but can help support the integrity of the peace process. Arms exporting countries, and South Sudan’s neighbors, all have a part to play in ensuring its success.

Justine Fleischner is a Senior Advisor with Conflict Armament Research and has worked in South Sudan since 2012. She can be reached on Twitter @fleischnerj