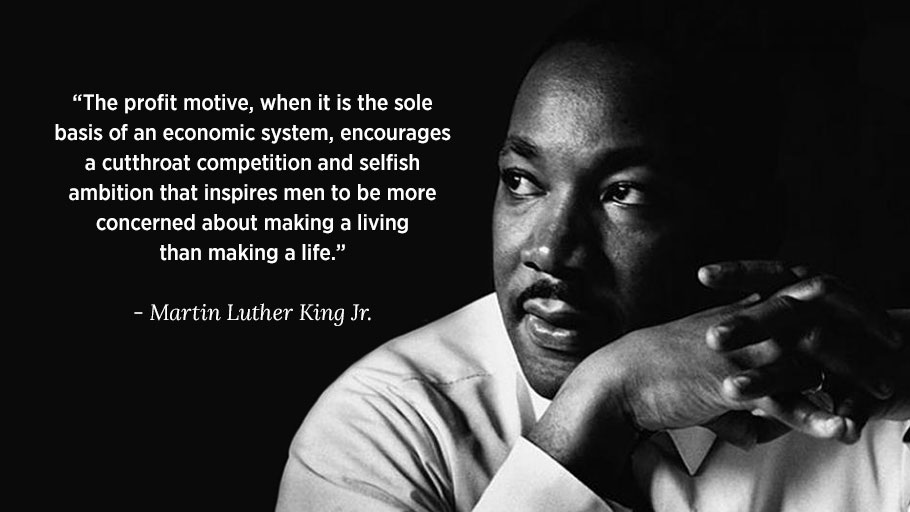 I imagine you already know that I am much more socialistic in my economic theory than capitalistic… [Capitalism] started out with a noble and high motive… but like most human systems it fell victim to the very thing it was revolting against. So today capitalism has out-lived its usefulness. – Letter to Coretta Scott, July 18, 1952

One day we must ask the question, “Why are there forty million poor people in America?” … When you ask that question, you begin to question the capitalistic economy. – Final speech to the Southern Christian Leadership Conference, 1967

In the thousands of speeches and celebrations on the official Martin Luther King holiday since its inception, there is a crucial fact of his life, activism and thought that no major commemoration has ever celebrated: that King was a strong and uncompromising opponent of American capitalism. This was no late-in-life development for King. It spanned from his youthful years to his death while attempting to gain humane wages and working conditions for a public union. Why was Martin Luther King so opposed to capitalism?

On the one hand, capitalism has generated immense wealth, significantly raised living standards and generally made life more comfortable and secure to varying degrees for most of those living in capitalist countries. On the other hand, it has exacted an excruciating toll in human toil and treasure. It has wrought immense suffering, systematic oppression and exploitation, and debilitating social alienation. Capitalism rewards, indeed depends upon, selfish, aggressive behavior. It values profits over people, promotes material values over spiritual values, dispenses power without social responsibility, and treats people as commodities to be discarded.

However, the factor that most powerfully fueled King’s opposition to capitalism is the imperative of his biblical faith to bridge the gulf between abject poverty and superfluous wealth. In this sense he considered capitalism an insult to his faith. King’s ethics are firmly in the tradition of radical biblical prophets like Amos, Micah, and Isaiah, who together proclaimed that everyone, including the rich and the powerful, were to be governed by ethical principles that included mishpat (foundational egalitarian justice), sadiqah (justice put into action), hesed (steadfast love; in politics, civility at the least) and emet(truthfulness, in public and in private). The political implications of this ethical constellation are reflected in this proclamation by the prophet Isaiah: “A throne shall be established in hesed (steadfast love)… and on it shall sit in emet (truthfulness) a ruler who seeks mishpat (egalitarian justice) and is swift to do sadiqah (put justice into action)” (Isaiah 16:5). From what we know of King, he was draped with the mantle of these prophetic ethics which, by definition, are fundamentally opposed to the anti-biblical foundational capitalist ethics of greed and dog-eat-dog self-dealing.

A sense of the deleterious effects of capitalism can be seen in the extraordinary inequality of wealth that plagues America today. Fifteen percent of the US population — nearly 47 million people — lives beneath the official poverty rate of $24,000 per year for a family of four. Roughly 18 million more are near poor, living within 130 percent of the poverty line. More shameful still, 20 percent of all American children live in poverty. Yet capitalists and their political minions fight tooth and nail against every effort to ensure that all American workers are paid a living wage. King rejected the capitalist logic that claims that the economy cannot bear a universal living wage. He said, “God intends for all of his children to have the basic necessities of life, and he has left in this universe ‘enough and to spare’ for that purpose.”

How can the inherent structural injustice of capitalism be addressed? For King the answer was democratic socialism. An aide recalled that at a meeting with his SCLC staff in the mid-1960s, King “talked about the fact that he didn’t believe that capitalism as it as constructed could meet the needs of poor people, and that what we might need to look at was a kind of socialism, but a democratic form of socialism.” In a 1966 speech to his staff, King explained:

We are saying that something is wrong … with capitalism…. There must be better distribution of wealth and maybe America must move toward a democratic socialism. Call it what you may, call it democracy, or call it democratic socialism, but there must be a better distribution of wealth within this country for all of God’s children.

Although King specifically advocated for democratic socialism as the ameliorator of the vast chasm between rich and poor, it is clear that his primary interest was not in democratic socialism or in any ideology for its own sake. His concern was for poor people’s needs to be addressed, for all to have equal opportunities to thrive, for workers to have democratic rights in the workplace. Under capitalism, workers as citizens have political rights, but as workers they have virtually no rights or say-so about their working conditions, hours, wages, etc. Corporate capitalists now even enforce control over what workers can say and do outside the workplace. For example, until the National Labor Relations Board recently stepped in, the Koch brothers-owned Georgia Pacific Corporation could terminate its workers if they shared information on social media about their own wages, hours and conditions of employment. The extent of corporate capitalists’ control of American workers’ lives and space indicates a virtual state of neo-feudalism in the American workplace.

Nevertheless, although he favored democratic socialism, King’s allegiance was to whatever form of political economy could ameliorate the vast chasm between rich and poor. What was non-negotiable for him, however, was democracy. That is why in King’s democratic socialism the emphasis is on democratic, meaning that he not only understood but also affirmed that the changes he sought should be democratically decided by popular vote. Thus his notion of democratic socialism entailed nothing that in any way can be construed as anti-democratic. Because of his faith in the ethic of egalitarian justice, King had no tolerance for communism or any other kind of authoritarianism. This he reiterated numerous times in his career. For King, democratic socialism was more of a perspective, a worldview, an approach to human society that was based upon humane, mutually cooperative economic relations — the very antithesis of capitalism’s dog-eat-dog competition and its valorization of greed and selfish individualism that routinely crushes anything standing in the way of corporate profits.

In other words, what King wanted was deeper democracy. In a speech to a retail union in 1962 he declared, “I believe that we can work within the framework of our democracy to make for a better distribution of wealth.” This echoed the belief in democracy that he publicly asserted as early as 1955, in his first address to the Montgomery Improvement Association: “We are here also because of our love for democracy and because of our deep-seated belief that democracy transformed from thin paper to thick action is the greatest form of government on earth.”

Yes, King wanted democracy, more democracy, but he wasn’t willing to leave the important task of achieving economic democracy to ad hoc laws and piecemeal policies. “For years I labored with the idea of reforming the existing institutions of society,” he said, through “a little change here and a little change there, but now I feel differently. You have to have a reconstruction of the entire society, a revolution of values.”

This is what he had in view in a 1966 article in Ebony magazine. “Our goal,” he wrote, “is to create a beloved community and this will require a qualitative change in our souls as well as a quantitative change in our lives.” That is also what he had in view when he declared in his last address to the SCLC in 1967, “What I am saying today is… ‘America you must be born again!’”

What did King mean by a “born again” America? From King’s words and deeds we can venture a few observations with confidence: An America whose policies are animated by love of neighbor and egalitarian justice; an economic system based on cooperation instead of dog-eat-dog competition; political and social responsibility for the needy instead of valorized selfishness; economic relations structured to value people over profits; an America reborn as a true political democracy in which “one person, one vote” strictly means that; and an economic democracy that countenances neither a de facto ruling class or an exploited workforce with no say in its workplace conditions or its destiny.

What would be a born again America for Martin Luther King? An America that understands, as King put it, “that an edifice which produces beggars needs restructuring.” An America that feels as passionately as King that, “The curse of poverty … is socially as cruel and blind as the practice of cannibalism.” An America that believes, as King did, that “The time has come for us to civilize ourselves by the total, direct and immediate abolition of poverty.”

What did King mean by a “born again” America? Among other factors, an America that does not genuflect before the altar of capitalism.

Shadow Armies: The Unseen, But Real US War in Africa

Shadow Armies: The Unseen, But Real US War in Africa
We Need Your Support — Donate, Share, Sign-Up Ways to Support