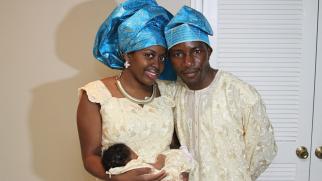 United in Complexion and Love, but a Culture Apart

You Are Here: Home » Blog » Commentaries/Opinions » United in Complexion and Love, but a Culture Apart

Charlotte and Olusola Fadare with their newborn daughter

At first glance you might guess by their deep-chocolate complexions, matching warm smiles and coordinated traditional attire that Charlotte Fadare and her husband, Olusola Fadare, have everything in common.

But the truth is, these newlyweds come from vastly different worlds, continents apart, and have spent much of their marriage bridging the cultural divide between their two backgrounds.

A year ago this month, the couple merged her Southern African-American heritage and his Yoruba Nigerian traditions through a 250-person, fusion wedding and reception in Baltimore. There was traditional Western and African wedding attire, a symbolic jump over a broom at the altar, Yoruban dishes alongside soul food options and a procession to Nigerian pop.

After the father-daughter dance ended and “Wobble Baby” blared over the reception-hall speakers, the bride’s side immediately rushed to the floor to dance to what’s become an African-American party staple, while many of the groom’s friends and relatives were left confused about what the fuss was about. It was immediately evident that the hit song wasn’t as big in Nigeria.

“It looked like confusion, so that was kind of funny,” Charlotte Fadare, 26, remembers.

Beryl Harold, who immigrated to New York City from Jamaica at 10 years old, recalls a similar wedding-reception experience. A couple of days post-honeymoon, she received a phone call from her new African-American sister-in-law, a devout Southern Baptist who was unfamiliar with Jamaica’s dancehall and reggae scene. The concerned new relative reported that she’d been so “aghast” at the sensual “dolla wine”-ing to artists like Sean Paul and Shabba Ranks that she’d fled the dance floor—and the wedding itself—early, with kids in tow.

Differences in dance styles and musical preferences are just the tip of the iceberg when it comes to the questions and complications that black intercultural (also called interethnic) couples encounter when blending cultures in the name of love. One day they might be managing resistance from family and friends whose ethnic biases mean their life partners inspire skepticism. On another, they’re making adjustments to accommodate each other’s cultural mores in areas ranging from food to education to gender roles. The issues they grapple with are daily reminders of the diversity of the black experience in the United States, and their relationships seem almost like microcosms of all its challenges and richness.

Still, these partnerships remain largely underexplored. Hunter College sociology professor Erica Chito-Childs, who researches race, gender and sexuality in relationships, explains that media and popular culture tend to focus on interracial relationships (in which one partner is white) to the exclusion of interethnic and intercultural ones.

She says this dearth—a manifestation of white privilege, in her opinion—allows myths about intercultural marriages to proliferate, since many assume that any relationship between two black people “[is] a homogeneous relationship and there are no issues” or believe that all black immigrant groups eagerly buy into “stereotypes of African Americans told by the larger society.”

Recognizing that the U.S. census lumps blacks into a monolithic check-box category, Emory University professor Regine O. Jackson and research scientist Yoku Shaw-Taylor sought to quantify how many blacks from America, Africa and the Caribbean actually intermarry. Using 2000 U.S. census data, they found that approximately 3 percent of all marriages among blacks are interethnic (between black Americans, who are native to the U.S., and blacks who come from the Caribbean or Africa), but estimate that the percentage is likely much greater, considering that immigration from Africa and the Caribbean has climbed exponentially over the last decade.

Why care about these unions when 97 percent of black couples are still choosing to marry within their own cultural groups?

Chito-Childs says that interethnic marriage can serve as a lens for understanding the larger society, break down barriers and challenge stereotypes. As she puts it, “Look[ing] at these people’s experiences … tells us a lot about our larger society and the work that needs to be done; what we should be thinking up for the future.”

Neighborhoods like Harlem, where African Americans, Africans and West Indians live and work together, may make all the difference, says Chito-Childs.

“They’re not going to believe those stereotypes any more because here they are every day with a person; they know that stuff isn’t true,” she explains. “They fall in love, and a lot of that is because the opportunity is there.”

That’s how Beryl Harold met her husband, Jamaar Harold, 14 years ago, through work.

She says of their 11-year marriage blending Jamaican and African-American cultures and Pentecostal and Southern Baptist customs, “I love exposing him to different foods and watching his eyes when he tastes something he really likes … just really immersing him into my culture, the music, the dance, all that.”

Antiguan Lenore Malone, who’s dating Mississippian Micah Coleman, says she has had to come to terms with what she chalks up as cultural differences in time orientation.

“There have been times when I feel like he might not value time … or something important to me if I’m trying to get there on time; I find that it’s not being respectful to me,” Malone, 25, says. “It’s something we’re working on in terms of meeting in the middle, being understanding of our differences.”

The first point of contention in Charlotte Fadare’s marriage came when it was time to choose a name for her newborn daughter. At first her husband insisted on naming their child—a practice rooted in Nigerian tradition—but she quickly reminded him, “She’s coming out of me; clearly, I’m going to name her. I’ve done most of the work.”

Later, her decisions to opt for a full African name and to breast-feed her daughter took some of her husband’s Nigerian friends by surprise. She says she’s heard comments like, “You’re not like the rest of the black Americans”— an observation that represents a route to acceptance that unsettles her.

Chito-Childs advises interethnic couples to navigate inevitable hurdles by “being open-minded and not just holding on to stereotypes that they may have heard from their families and their communities.” Moreover, she doesn’t agree that the complications these pairs contend with have to be deal breakers. Rather, in her view, differences can be seen as a benefit “because all relationships take compromise.”

As Charlotte Fadare looks forward to commemorating her first wedding anniversary, she reflects on the lessons she has learned from her intercultural marriage. Among them: “You have to know who you are because people are going to challenge who you are or what they think you are, and you have to be firm.”

Plus, she adds, “You also have to be open and understanding to want to learn and incorporate the other culture … [and] not be afraid to go back to the home country … that’s where he’s from and that’s what makes him who he is.”

Erin C.J. Robertson is a summer intern at The Root.