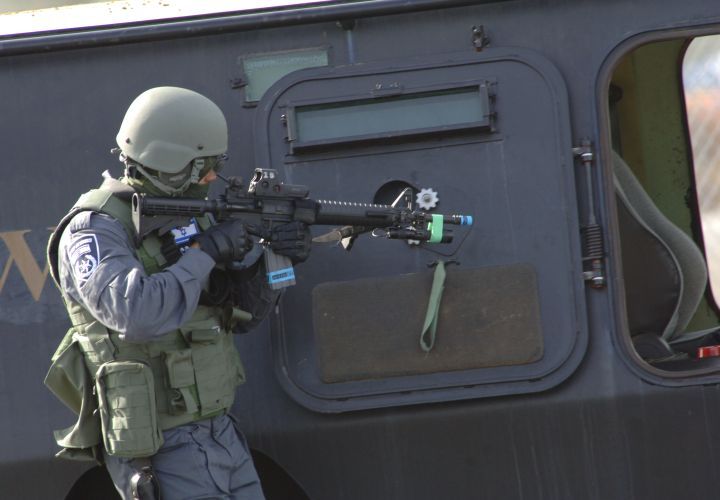 Urban Shield: ‘The Epitome of State Repression’ Coming to Town Near You

You Are Here: Home » Blog » Commentaries/Opinions » Urban Shield: ‘The Epitome of State Repression’ Coming to Town Near You

Meeting of SWAT teams and military contractors from around the world faces local opposition in Oakland, CA

A member of the Israeli Special Police Force participating in an ‘exercise’ at the 2010 Urban Shield in Alameda County (Photo: PoliceMag)SWAT teams, police forces, and military contractors from across the world will converge in Oakland, California this weekend—October 25-28—for a little-known ‘Urban Shield’ global training exercise and weapons technology expo that is bankrolled by millions of dollars from the Department of Homeland Security and arms manufacturers and is billed as a program to fight ‘terrorism.’Urban Shield promotional material on the Cytel Inc. website (Image: Cytel Inc.)

They will be met on Friday by protesters from over 30 Bay-Area community and peace and justice organizations who say this gathering, that stands at the nexus of global and domestic militarization, is not welcome in their city.

“What Urban Shield represents to us is the epitome of state repression that has been impacting communities of color and immigrant communities for decades,” said Lara Kiswani of the Arab Resource and Organizing Center in an interview with Common Dreams. “Different strategies of surveillance against Arabs and Muslims and brown and black people are being used as tactics against our people back home. This is the militarization of the police.”

Coordinated this year by Alameda County Sheriff Gregory Ahern, whose office is receiving $7.5 million in federal grants according to the War Resisters League, Urban Shield is a national effort overseen by a California-based private firm Cytel Inc. It is hosted by the Bay Area Urban Security Initiative that has been building collaboration between California police departments since 2006 and raking in Homeland Security funding since 2011. Its location moves annually.

Despite its global scope, the event has largely moved forward without the consent or knowledge of local residents and even some city council members.

SWAT Teams will hail from countries including Israel, Bahrain, Brazil, Guam and Qatar. As Max Blumenthal of Mondoweiss points out, past participants have included the Israeli Border Police Unit Yamam, which carries out extra-judicial assassinations of Palestinians, as well as Bahraini units that play a key role in violently repressing the country’s ongoing mass protests.

Attendees will carry out war games in Alameda County, as well as sample products from companies that produce tear gas, spying and surveillance systems, and military weapons.

As the East Bay Express notes, in addition to hefty federal backing, sponsors also include major arms companies including ATK, which produces depleted uranium ammunition. Numbered among its sponsors is the company Safariland, which the Facing Tear Gas Campaign of the War Resisters League has criticized for exporting tear gas to governments across the world, from Oakland to Israel to Tunisia, to be used as tools of repression and social control.

According to the War Resisters League, Ahern test flew a drone at last year’s Urban Shield, prompting him to move forward with plans to purchase drones for Alameda County.

“The United States exports repression globally,” said Kiswani. “The way the occupations in the Arab world repress people, and Israel represses the people of Palestine, these are the same strategies used against communities of color and poor people at home.”

“We see events like Urban Shield as one of the main engines of militarization of the police and everyday life,” said Ali Issa of the War Resisters League in an interview with Common Dreams today.

As Urban Shield opens Friday so will a community protest, which will feature the testimony of Oakland residents who have directly faced violence and abuse at the hands of police. Organizers will also present statements from pro-democracy activists in Bahrain, Palestine, Canada, and Turkey.

California resident Dionne Smith-Downes told Common Dreams that she plans to protest the militarization of U.S. police that she says has tragically touched her own life. “My unarmed son was shot with military weapons by the police,” she said, explaining her son died from his wounds. “I feel that military weapons should not be used in a community.”

“Pressuring those that have the most to gain from the militarization of US police like Safariland—and letting people know that these companies have ties to everyday products like phones, bikes, and public universities—is going to be the most effective way to roll this police-state process back,” said Issa.

“The Bay Area has a long legacy of organizing against police violence,” Kiswani declared. “We are making those links and trying to raise awareness in our own communities and across communities. We must be prepared to protect our communities in the face of these repression strategies.”