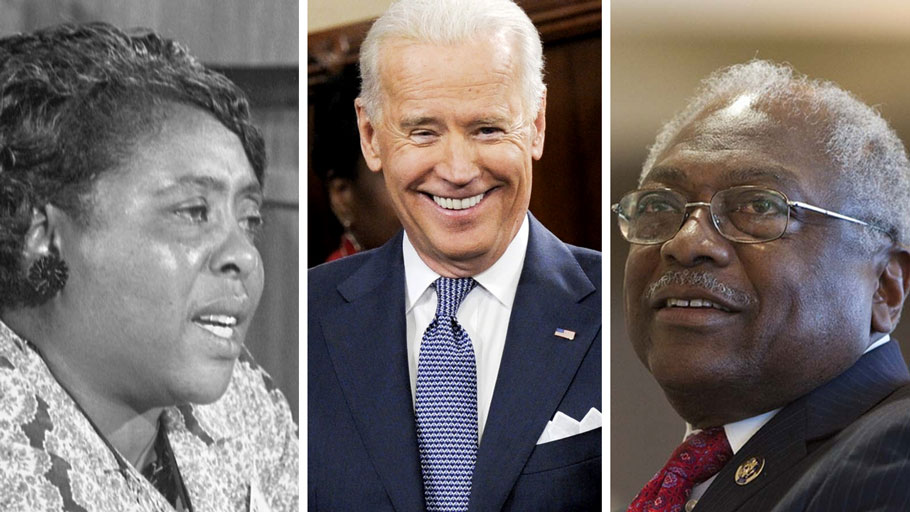 Will Joe Biden Have A Black Agenda?

You Are Here: Home » Blog » Commentaries/Opinions » Vantage Point Articles » Will Joe Biden Have A Black Agenda?

Black Voters to the Rescue… Again

There is one indisputable fact about the 2020 Democratic presidential primary: former Vice-President Joe Biden’s bid for the nomination was reeling and on the ropes before he was rescued by Black voters, beginning with the decisive endorsement of veteran Congressman James Clyburn, the widely respected custodian of the “fire wall” in South Carolina.  Senator Bernie Sanders was on a roll as the frontrunner, with considerable support from younger Black voters, until he crashed into a “wall” of mostly older, pragmatic Black voters in South Carolina. While some of these voters may have shared Senator Sander’s progressive policy positions, overwhelming their mission was to pick the candidate they felt could DEFEAT TRUMP!  And, as Congressman Clyburn put it in his endorsement, “we know Joe;” an expression of confidence based on familiarity with Biden as President Obama’s Vice-President and by extension a sufficient level of comfort with his policy positions as a center-left politician.

Biden was beside himself with glee as Black voters delivered a resounding victory in South Carolina.  Awaiting their turn, Black voters followed suit by delivering huge victories in the Super-Tuesday and Michigan Primaries to give Biden an insurmountable lead over Bernie Sanders. Without question Black voters rescued Joe Biden’s campaign as the candidate they deemed best equipped to defeat the Orange man in November. Now the question is, will Joe Biden have a Black Agenda as a centerpiece of his campaign in the General Election?

Let me be clear, I am a pragmatic progressive who believes Bernie Sanders had/has the most visionary and transformative platform and could have defeated Trump had he won the nomination. And, in the words of Bernie Sanders, I also believe that the strategic imperative of our time is to defeat the “most dangerous President in the modern history of this country,” Donald Trump! So, unlike some of Bernie’s ideological supporters (I don’t mean that in a negative sense), I am delighted that he did the statesman like thing by suspending his campaign, endorsing Joe Biden and calling for a united front to defeat the Orange man.

Now that Biden has been rescued to face Trump in the general election, the question is can he inspire, encourage and mobilize a sufficient voter turn-out to seal the deal. One thing is certain, defeating the Orange man will not be possible without an enthusiastic, energized Black electorate. There is a case to be made, as Rev. Jesse L. Jackson might put it, that Hillary Clinton lost the 2016 election by the margin of a dip in Black voter turn-out in the key battleground states of Pennsylvania, Ohio, Michigan and Wisconsin; a margin occasioned by the failure of Hillary Clinton and the Democratic Party to respectfully reach out and touch sectors of the Black electorate, including “improbable” voters who feel neglected and taken for granted.

For decades Blacks have been the Democratic Party’s most reliable voters; a solid rock the Party could always stand-on.  But, unfortunately, the Democratic Party has never, ever rewarded Black voters in proportion to our support or our needs as a people. One of the main reasons for this failure has been the fear that visibly addressing Black issues would alienate or frighten White voters. Moreover, with the Republican Party becoming increasingly rightwing and reactionary, there is the perception that Blacks have no alternative, no where to go and therefore will grumble but reliably toe the Party line.

This was particularly the case during the era of America’s “first Black President,” the centrist leader of the Democratic Leadership Conference, William Jefferson Clinton. He got over by slapping on some shades, playing the Saxophone, talking Black and feeding Black folks symbols while de-emphasizing urban policy and ending “welfare as we know it!”  But the Republican Party was/is so reactionary, even overtly racist in some of its actions, that from Clinton to Obama, the Democratic Party’s race-neutral, trickle down policies presented the only rational choice for pragmatic Black voters.

Like Fannie Lou Hamer, a founding member of the Mississippi Freedom Democratic Party, I suspect that an increasing numbers of Blacks voters are “sick and tired of being sick and tired” of the Democratic Party’s blasé attitude toward its most reliable constituency. This is certainly true of younger Black voters as evidenced by their enthusiastic embrace of Bernie Sanders. Faced with a choice between “our friend Joe” and the Orange man, the majority of Black voters will turn-out and vote for Biden despite the Democratic Party’s nonchalant attitude. The problem is that younger voters are not likely to be moved by the same old symbolism over substance. Nor will progressive faith leaders and their congregations be content with “our friend Joe” stopping by to drop some cadence-laden symbolic utterances from the pulpit.  I suspect it will take more than that this time.

While Biden currently holds a 4-6 point lead over Trump in most national polls, (which really isn’t a big margin), it’s a toss-up in the battleground states. These polls also show a strong enthusiasm for the Orange man among Republican voters. Support for Biden is lukewarm among Democratic voters, especially younger Black voters. This should be a source of alarm for “our friend Joe.” Biden will need every probable and improbable voter he can get to ensure the defeat of the Orange man. This clearly suggests to me, that he must openly adopt a Black Agenda and abandon the “fear” that the public embrace of Black issues will alienate White voters.

I have frequently reminded all who would listen that the “biggest political party in America is not the Democrats, it’s not the Republicans, it’s non-voters.” This is a slight exaggeration, but the fact is that the U.S. has the lowest voter participation of any of the western democracies.  Even in a general election, which attracts the most voters, pundits and commentators boast of a fantastic turn-out if up to 55% of the eligible electorate in the U.S. votes. In countries like Canada, Great Britain, Germany or France, voter turn-out is routinely 80% or higher.  In America huge numbers of eligible voters do not vote and that includes White people (Black voters actually turn-out at a slightly higher rate than White voters in general elections).

In a low voter participation environment, the Party or candidate that can effectively motivate and mobilize improbable voters will win! Stacey Abrams in Georgia proved this proposition when she unapologetically declared that she would campaign on a progressive platform in a conservative state and focus on motiving and mobilizing improbable voters, including openly addressing the issues and concerns of Black voters. “The proof is in the pudding.” A record number of Black folks joined with a higher than expected turn-out of Latinos and Whites to propel her to within 55,000 votes of making history. Many believe she fell short because of massive voter suppression executed by her Republican opponent, Brian Kemp, who was also the sitting Secretary of State.

Stacey Abrams actually scored a victory and in so doing laid out a blueprint for moving beyond the lazy, probable voter-centered strategy of the highly paid “consultant class” within Democratic Party; she intentionally added “working” to motivate and mobilize improbable voters to the equation!  “Our friend Joe” would do well to follow her example, but it will take more than a “we know Joe” strategy to increase enthusiasm among the voters he will need to decisively defeat the Orange man. Biden will need the young Black voters who supported Sanders and hundreds of thousands of improbable voters who have decided to be spectators in a sport where their numbers are seldom called out loud.

“Our friend Joe” needs a Black Agenda.   And it cannot be the customary “stealth” Agenda, consisting of policy preferences quietly whispered into the candidate’s ear for consideration. I would expect that Congressman Clyburn will offer his suggestions as will the leaders of Black America’s premier political, civil rights, human rights and labor organizations. In an ideal world, these leaders/organizations would come together to publicly announce a “Priority Black Agenda” (unfortunately that won’t happen). The key word is “publicly.” The improbable voters that must be mobilized, including young Black voters, are not likely to be motivated to embrace Biden based on a stealth Agenda that they know nothing about. And, while the idea of selecting an African American woman as his running mate is getting a lot of buzz and is definitely the right thing to do, it is not a substitute for a publicly articulated set of Black policy positions. “Our friend Joe” needs to say it loud,” got a Black Agenda and I’m proud!”

To reiterate, the issue is not whether Blacks will turn-out to support Biden in November. The habitual and pragmatic Black voters will turn-out, whether there is a Black Agenda or not. Like me, they are determined to crush the Orange man. The issue is the size of the voter turn-out, particularly in the battleground states where Trump’s base will be even more energized than in 2016. Biden will need young Black voters, progressive faith leaders and their congregations and improbable voters to be super-energized! The fuel for that energy must be a Black Agenda; a range of race-based remedies and policy prescriptions which are more urgent than ever before given the gross-disparities and inequalities exposed again by the Coronavirus Pandemic.

I don’t claim to speak for younger Black voters, progressive faith leaders or improbable voters who I contend must be motivated and mobilized to resoundingly defeat Trump, but I offer a few ideas which might contribute to the conversation:

If he is serious about motivating and mobilizing the constituencies referenced above, Biden will move quickly to bring them to the table and negotiate an agreeable progressive Black Agenda.  Biden and the Democratic Party must also commit to investing the resources necessary to galvanize these constituencies for a massive voter turn-out. For the habitual, pragmatic Black voters, “we know Joe” will be sufficient for them to march on ballot boxes November 3, 2020. But, “We know Joe” is not likely to inspire young Black voters, progressive faith leaders and their congregations and improbable voters to join the march to defeat the Orange man; a victory, Black America and the nation urgently needs at this perilous moment in history. This is the challenge “our friend Joe” must confront and overcome!  The question is how will he respond? Will Joe Biden have a Black Agenda?