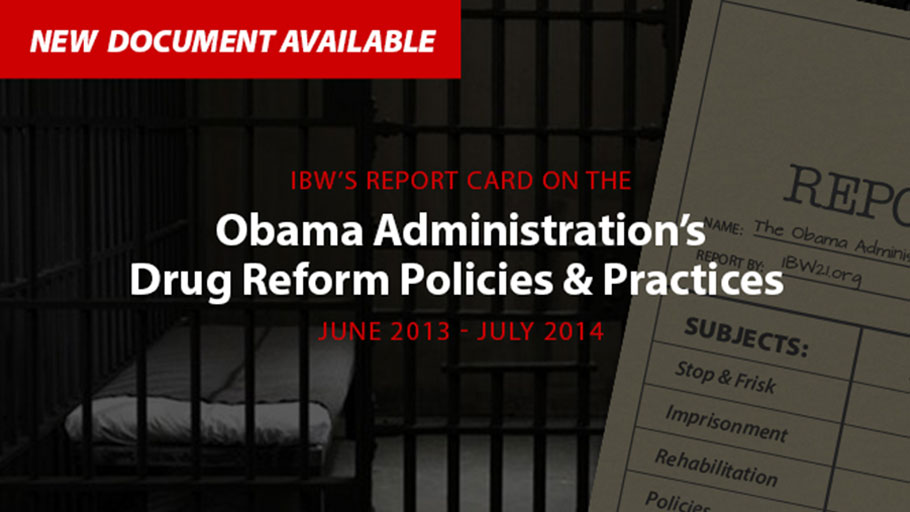 Executive Summary of the Report Card 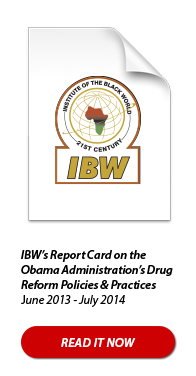 Perhaps no other US government program in recent decades has inflicted more social, psychological and economic damage on African-American communities than the ill-fated War on Drugs. With close to $3 trillion expended to date, millions of people arrested, killed and/or incarcerated, the War on Drugs has been a spectacular failure and an unmitigated disaster for black communities across the country.

Over the past year, the Institute of the Black World 21st Century (IBW) has invested a significant amount of time and resources in research, advocacy and organizing around the War on Drugs.

In a ‘Day of Direct Action’ on June 17, 2013, IBW led hundreds of demonstrators on a march and rally in front of the White House which called on President Barack Obama to end the War on Drugs and the mass incarceration of black people.

IBW declared that for black people, the WOD had become a “war on us”, resulting in a racially biased policy/strategy, i.e. the “New Jim Crow,” which has disrupted and devastated Black communities across the country.  A year ago, protestors from New York, Boston, Pittsburgh, Baltimore and Washington DC came together in the nation’s capital to proclaim that we have suffered long enough and that the time had come to bring an end to an ill-conceived and destructive policy/strategy.

A year later, on the occasion of the 43rd anniversary of the declared ‘War on Drugs’, IBW is releasing a “report card” on the response of the Obama Administration to our demands. Our report finds a mixed record of some significant steps taken by the White House and the Justice Department over the past 12 months along with persistent and unacceptable inaction and foot-dragging in a number of critical areas.

In short, while progress has been made to cease the most repressive and racially discriminatory drug policies, there’s still much left to be done to bring a speedy and comprehensive end to the War on Drugs and to begin repairing the horrible damage it has visited on black communities across the country.

The IBW Report Card reflects an array of observations and critiques of official drug policies over the past year. It is IBW’s summary of significant developments in official drug policy reform as well as in the growing social movements to end the War on Drugs. The various sections of the report are culled from a wide body of academic research, news reports, analyses and commentaries by authoritative and prestigious sources in the fields of journalism, scholarship, public policy research, activism and advocacy.

Much of this material can be found in the archives of the special “War on Drugs” section of IBW’s Web site.

Key Headlines in the Report Card

Here are some of the key headlines in IBW’s Report Card.

While IBW’s “Report Card” concludes by making a number of demands and by offering several concrete proposals and recommendations to the Obama Administration in the area of drug policy reform, perhaps the most urgent priority in our war on the “War on Drugs” is to immediately de-criminalize the possession and use of small amounts of marijuana.

Half of the “War on Drugs” is a war on marijuana and black people are arrested at 5 times the rate of whites for marijuana possession even though the rates of marijuana consumption are roughly the same between blacks and whites. Other marijuana data compiled over the last year continues to reflect a persistent pattern of disproportionate and racially imbalanced punitive practices for drug-related offenses.

Finally, IBW is using this report card to repeat its demands of a year ago when we marched to the White House on June 17th 2013 that President Obama should:

• Intensify efforts to eliminate the disparity in sentencing between powdered and crack cocaine.

• Issue an Executive Order terminating the War on Drugs and replacing it with a national initiative that treats drugs and drug addiction as a public health issue.

• Form a Presidential Commission to initiate a National Dialogue on the regulation and taxation of drugs.