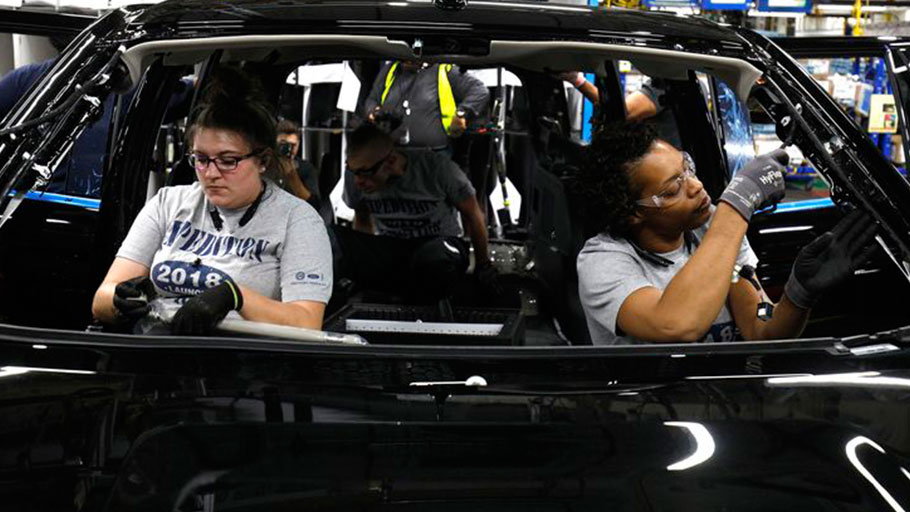 African-Americans and the driving forces in the American auto industry

You Are Here: Home » Blog » Editors' Choice » African-Americans and the driving forces in the American auto industry

When Africans were forcibly brought to America, they worked at the points of production. And whether as a multitude of enslaved workers on small farms, large plantations, in mines or elsewhere, black laborers were vital cogs in creating wealth for their owners. On a national scale, enslaved black laborers provided a workforce vital for the development of the American republic by bringing wage-free economic success and international power to the growing new nation.

Used everywhere from plantations to industrial plants, black labor was instrumental to the growth of the American economy, and nowhere was this better illustrated than in the automobile industry.

In 1914, when Henry Ford announced his plan to pay workers $5 a day, it was essentially a way to increase his employees’ income and make it possible for them to afford to buy his cars. But Ford’s strategy had ramifications across the nation, spurring the migration of thousands of African-Americans — most of them from the South — who sought opportunities beyond the limitations of racist Jim Crow-era policies following the end of the Civil War and slavery in the U.S.

Many of these black migrants, only a generation or so from bondage, were skilled workers. But when they arrived at the auto plants in Detroit, they were mainly assigned to janitorial duties and foundry work — the lowest-paying, most hazardous jobs.

But this was a far cry from the oppressive conditions they endured behind the “Cotton Curtain” in bigoted Southern states, and to some degree, it prepared them for the next obstacle — racist American labor unions.

In the Journal of Negro History, Joyce Shaw Peterson noted that by 1930, black workers comprised 14 percent of Detroit auto plant workers. Unions were not immune to the racism permeating general society. But as in other arenas, African-Americans were determined to achieve equality and raise their standing – and attain more than just rank-and-file membership.

During World War II, Detroit was called the “arsenal of democracy,” with its automotive plants quickly converted to manufacture weapons of war for the U.S. The exigencies of war, along with the brutalities of Jim Crow laws in the South, spurred a second large migration of African-Americans to Detroit.

A number of notable Detroiters – who became internationally known – began their careers in auto factories. They include Coleman Young, who became he city’s first African-American mayor; music mogul Berry Gordy, who founded Motown Records, and Elijah Muhammad, founder of the Nation of Islam, all of whom were at one time employed by the Ford Motor Company. Because of the grueling work and the indifferent United Automobile Workers union, none of them worked there very long. In particular, Young’s political radicalism and his refusal to tolerate racism or harsh treatment from shop stewards sped his departure.

Despite the hardships of the workplace and being mired in the union’s unskilled rank and file, blacks remained a sizable force in the auto industry, the labor union, and in the growing campaign for civil rights.

At the forefront of forging solidarity between black workers and the unions was A. Philip Randolph. An apogee of this effort occurred in 1963 with the historic March on Washington.

Even UAW President Walter Reuther was among the attendees, and glad to be photographed with Dr. Martin Luther King Jr., though he had done very little to end the pervasive racism in the auto plants.

By the late 1960s, the UAW had lost touch with its base, especially its large number of minorities. “At least 30 percent of the UAW membership was black, yet the 26-person executive board had only two blacks, Nelson Jack Edwards and Marcellus Ivory,” wrote in “Detroit: I Do Mind Dying.”

Working conditions got so bad — assembly lines moved too fast, and black workers’ demands were not met — that a wildcat strike was inevitable. In 1965, I had just ended own my brief tour of duty at Dodge Main auto facility as the militant workers launched a series of “Revolutionary Union Movements” at various plants that ultimately morphed into the “League of Revolutionary Black Workers.” One of the protest signs that proliferated at the rallies read “UAW — means U Ain’t White.”

The turmoil of the ’60s surged into the ’70s, and by the ’80 and ’90s — with the arrival of automation, cybernetics and the competition from abroad — black workers were becoming increasingly invisible.

During the recent Democratic presidential debate, Sen. Elizabeth Warren touched on the devastating effects of the current administrations’ trade deals and tariffs, particularly on American manufacturing. In the vortex of this downturn is the auto industry, and needlessly to say, the bottom rung is mainly occupied by black workers. There used to be a saying about Detroit’s economic prominence that was based on its automotive production: When the nation sneezes, Detroit comes down with pneumonia. Well, if Detroit’s auto industry is ailing, then black workers are on life support.