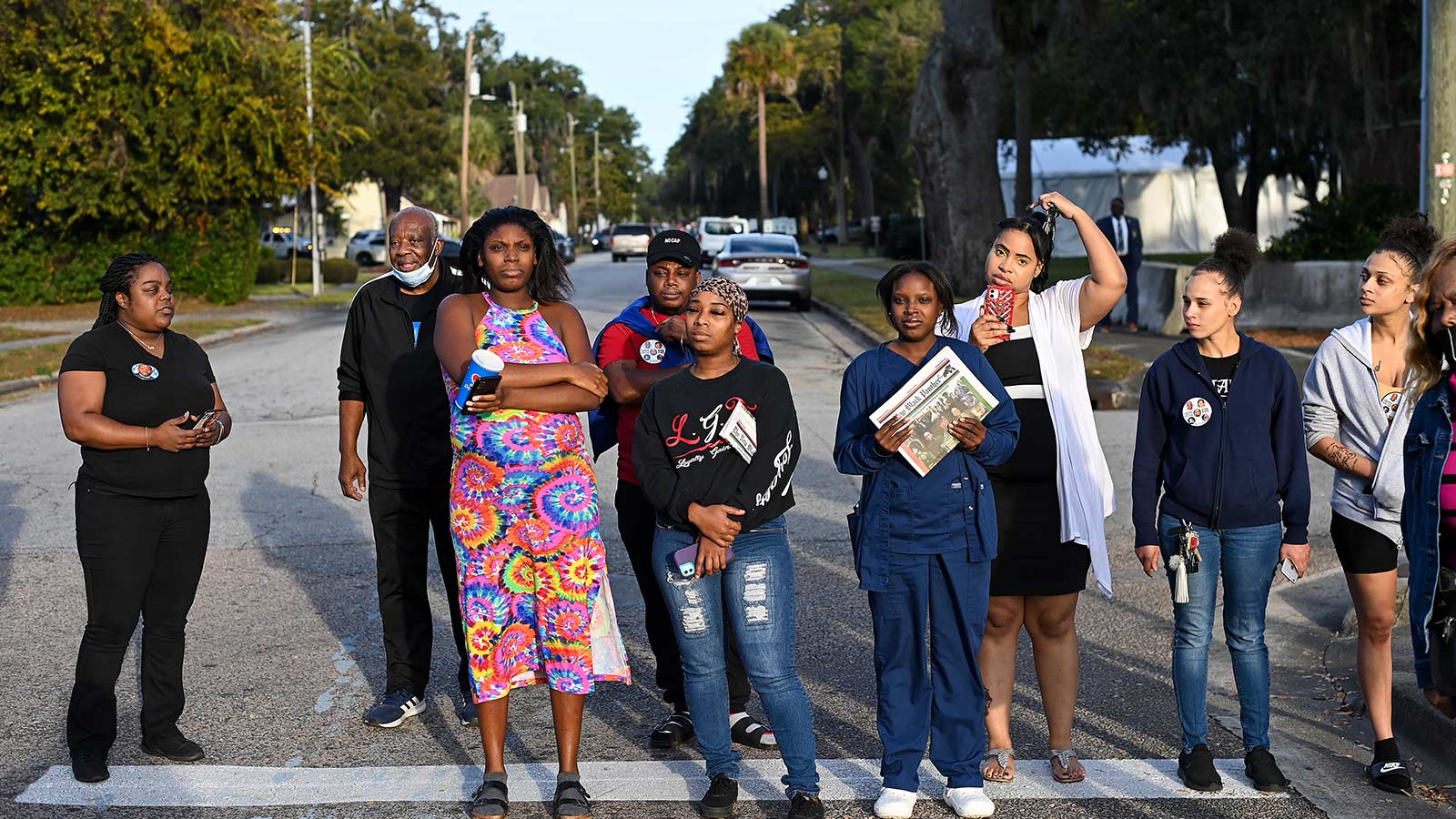 As Arbery trial draws to a close, Black Americans again ask if there will be justice

You Are Here: Home » Blog » Editors' Choice » As Arbery trial draws to a close, Black Americans again ask if there will be justice

Black Americans are anxiously awaiting a verdict and bracing for fallout if the defendants are acquitted in a case seen by many as a test of the justice system’s fairness.

By Tim Craig and Hannah Knowles, The Washington Post —

As the prosecution prepares to give its final rebuttal Tuesday in the murder trial of the three White men accused of killing Ahmaud Arbery, Black Americans here and around the country are anxiously awaiting a verdict and bracing for fallout if the defendants are acquitted in a case seen by many as a test of the justice system’s fairness.

Prosecutors have called defendants Travis McMichael, his father, Greg McMichael, and their neighbor William “Roddie” Bryan dangerous vigilantes who chased Arbery, a 25-year-old Black man, in pickup trucks through their neighborhood before one of the men shot him and claimed self-defense. Defense attorneys told jurors that their clients had reason to suspect Arbery of burglary and that they were following him to make a citizen’s arrest.

Activists and community leaders say they are bracing for outraged citizens to fill the streets in protest should the men be acquitted, with the stakes being especially high for Black residents.

“I think if the verdict is wrong, and I am sad to say this, we are in for a rough two-week period,” said the Rev. Anthony Evans, president of the National Black Church Initiative. “And this is something where there would be nothing I can do to stop it.”

Much of the country was focused this month on Kenosha, Wis., and the polarizing trial of Kyle Rittenhouse, the White teenager who was acquitted last week on murder charges after arguing he shot three people, killing two, in self-defense. But Evans and other Black leaders said they have been focused on the trial in Arbery’s killing, and the importance of its outcome as a barometer of the justice system and the value of Black lives.

The trial for the three men charged in Ahmaud Arbery’s death has begun in Brunswick, Ga. Arbery’s mother, Wanda Cooper-Jones, didn’t think a trial would happen. (The Washington Post)

Although prosecutors have largely avoided allegations of racial profiling, telling the jury they need not prove the defendants’ motives, many Black Americans say they see the case as inseparable from race. The case went without arrests for more than two months last year, until leaked video of the incident sparked protests and national demands for consequences, prompting the Georgia Bureau of Investigation to take over the case.

With a verdict looming, some who were outraged by Arbery’s killing remain hopeful the jury will quickly reach a decision to convict. But some Black Americans say they also are preparing for disappointment, and that an acquittal in the death of another unarmed Black man could reinforce the belief that there are two justice systems.

Even before arguments in the trial began, there was skepticism within the community that it would be fair.

Many questioned how a jury in Glynn County, which is 26 percent African American, could end up with only one Black juror and 11 White members. Defense lawyers struck all but one of the Black prospective jurors in a pool of finalists found qualified to serve, drawing accusations of bias from the prosecution. But the judge said the defense had given sufficient “race-neutral” explanations for its decisions.

Black leaders also were dismayed by a defense attorney’s objection to “Black pastors” attending the proceedings. The defense sought a mistrial after the Rev. Jesse Jackson joined Arbery’s relatives in the courtroom, arguing that he and other high-profile guests could sway jurors.

But Black residents and leaders say the outcome of the trial will be especially emotional because of the nation’s dark history of racial terror, including lynchings and other acts of vigilantism.

“Everyone in this state, and in this nation, will be disappointed if they are not found guilty of murder,” said Atlanta City Council member and mayoral candidate Andre Dickens, who is Black. “There will be a lot of public outrage about it, and rightfully so.”

The Arbery case did not create the stark national and political divide that Rittenhouse’s did. Arbery’s killing was condemned across the political spectrum and led the Republican-dominated Georgia legislature to pass a hate crime law, as well as overhaul the citizen’s arrest statute the defendants cited. That could make an acquittal all the more stunning, some observers said. The verdict in Rittenhouse’s case — celebrated on the right and slammed on the left — was anticipated by many legal observers who saw a strong self-defense case. Arbery’s killing has brought no such consensus.

Barbara Arnwine, a lawyer and activist who has been in Brunswick attending the trial, pointed to reports last week that an attorney for Bryan sought a last-minute plea deal. Arbery’s mother said the prosecution turned it down; Bryan’s attorney denied an attempt to bargain.

“They know that their case is not airtight,” Arnwine said of the defense heading into closing arguments.

The death of Ahmaud Arbery transformed Brunswick, Ga. Now, community leaders are hoping more change will come as the trial for his killing comes to an end. (Drea Cornejo/The Washington Post)

The McMichaels and Bryan are charged with aggravated assault, false imprisonment and two kinds of murder: malice murder, which involves intent to kill, and felony murder, causing someone’s death with a felony.

Standing outside his cousin’s house, in one of the predominantly Black neighborhoods not far from the Glynn County Courthouse on Tuesday, Keith Johnson, said “every Black man in America” has a stake in the outcome of the trial. He equated Arbery’s killing with those of George Floyd, Trayvon Martin, and Emmett Till.

“It just shows that Caucasians, or White folks … it just shows they have disrespect for Blacks, and it goes all the way back to slavery times,” said Johnson, 67. “You are sitting right here in an old slave port, and they thought they could just run that man down, just because he was jogging. How much more guilty can you be? … And all that the Black people are asking for is justice.”

Standing nearby, 30-year-old Natasha Green said she does not understand why the verdict is even uncertain. “Right is right, and wrong is wrong, and what they did to [Arbery] is wrong,” she said. ”

Community leaders in Brunswick have emphasized that Arbery’s death last year sparked protests and new energy around local politics — not violence. They said they are optimistic that personal relationships and the influence of Black pastors can quell any potential unrest.

On Monday, armed members of Black gun-rights groups circled the courthouse, saying they were there to protect demonstrators and exercise their Second Amendment rights. Members of the New Black Panther Party also arrived to protest.

“America’s justice system is on trial right now,” said Nasiy Nasir X, a leader of the Minneapolis-based Lion of Judah Armed Forces, carrying an AR-15 rifle. “Our people would like more of our peers as a part of that jury. So, if there is no justice here, it will just continue to show the racism and the injustice of the system we reside in.”

Nearby, Jackie Goodwill, 60, stood quietly holding a “Justice for Ahmaud” sign. Goodwill attended the same church as Arbery’s mother, who has since moved out of Brunswick. “It’s definitely going to deplete us in our spirit if justice doesn’t prevail, and it’s going to grieve a lot of people,” Goodwill said. 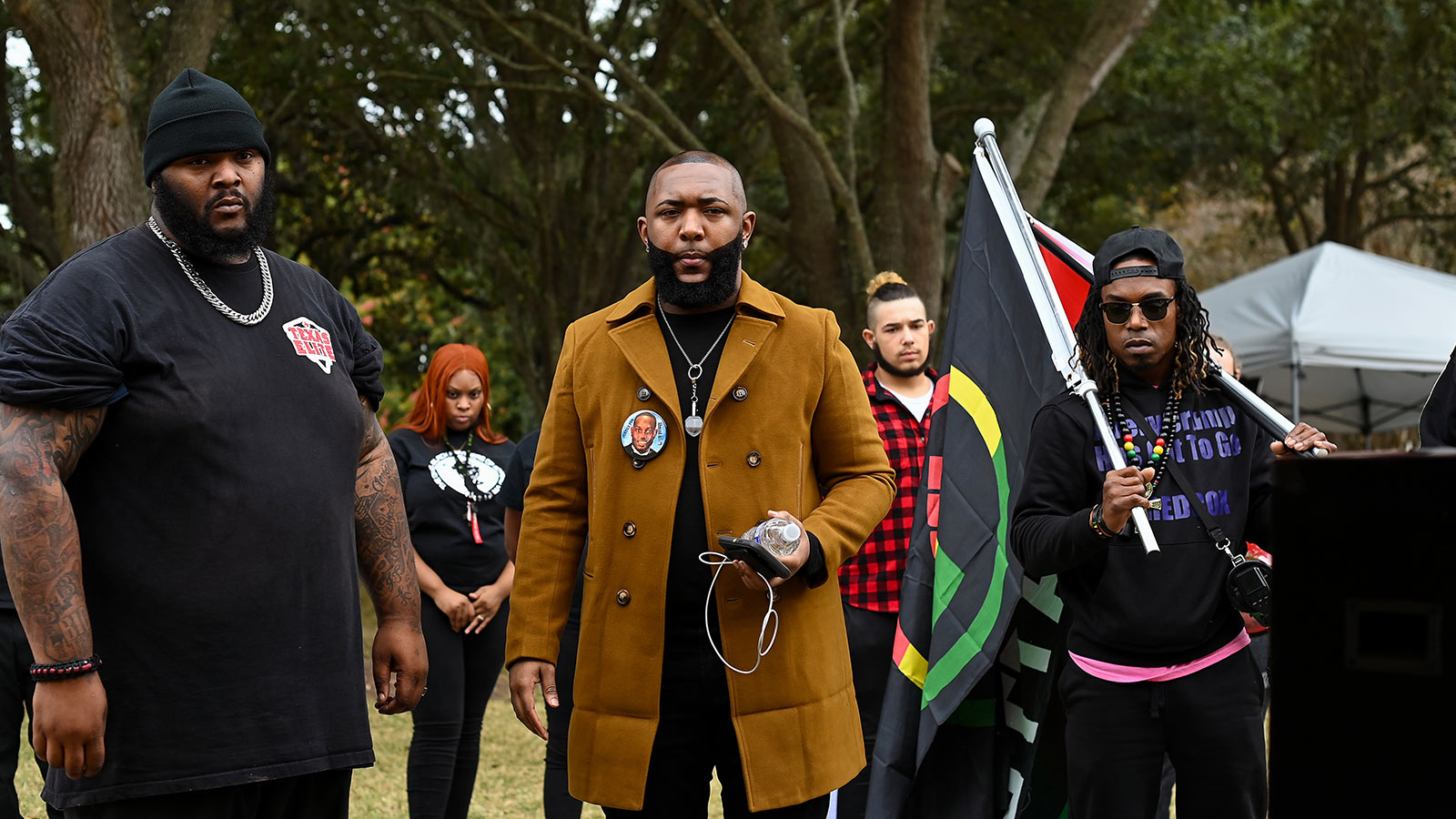 Bob Cunningham, 69, who is White and has lived in Brunswick for four decades, said he believes most White residents here also will be outraged if the jury acquits the men. He noted that community leaders and business owners banded together last week to help feed dozens of Black pastors who came to Brunswick to support Arbery’s family.

“If there is an acquittal of any of the three, I think the community is going to have a hard time, and we generally don’t have those kind of times,” Cunningham said.

Asked if he feared violence, Cunningham said he “does not expect it to come from people in this town.”

“If they have help from outside, then I don’t know,” he added.

As he raked a neighbor’s leaves on Monday afternoon, David Walker, 59, said Black residents would relive their own past experiences of being treated unfairly by police, the courts or their neighbors should the defendants walk free.

“What if that was your brother?” asked Walker, a lifelong resident of Brunswick. “How would you feel?”

Featured image: Members of Ahmaud Arbery’s family gather before marching around the Glynn County Courthouse during closing arguments for the three men charged in his death on Nov. 22 in Brunswick, Ga. (Joshua Lott/The Washington Post)