Black Voters, a Force in Democratic Politics, Are Ready to Make Themselves Heard

You Are Here: Home » Blog » Editors' Choice » Black Voters, a Force in Democratic Politics, Are Ready to Make Themselves Heard 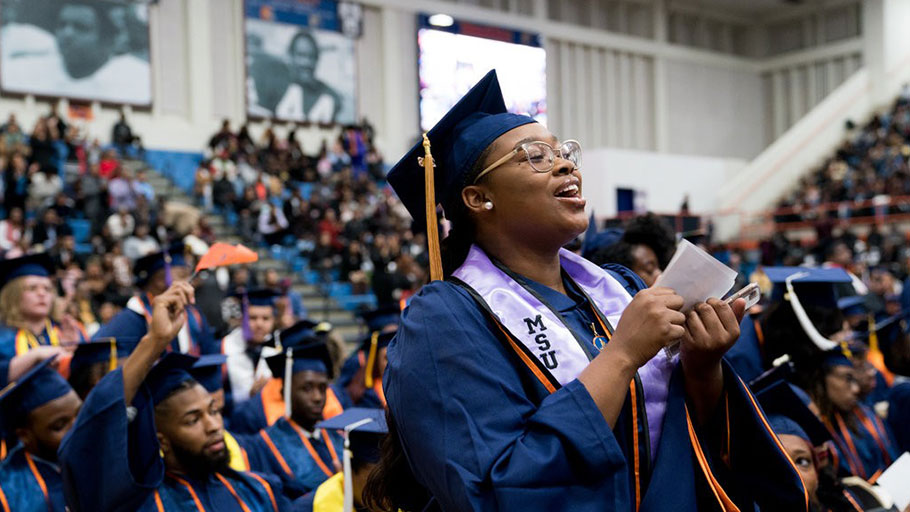 BALTIMORE — The first “Amen!” rang out after a couple of minutes, as Senator Elizabeth Warren, speaking to an almost all-black audience at Morgan State University’s winter commencement, described how America has “systematically discriminated against black people.”

Heads nodded as she mentioned “redlining,” the discriminatory practice of denying mortgages, usually in poor and nonwhite areas. There was applause when the Massachusetts Democrat declared the country has “two sets of rules: one for white families and one for everybody else.”

Still, if her speech at the historically black college in Baltimore was a preview of a possible presidential campaign, she did better at opening the door than at closing the sale. “She didn’t sugarcoat anything, but my question is: Will she keep black issues on the forefront?” asked Kerrianne Largie, a 39-year-old woman who backed Senator Bernie Sanders of Vermont in the last Democratic primary.

The first votes of the Democratic presidential primary remain more than a year away, but black voters are keenly aware of the prominent role they will play in choosing the next nominee. In 2016, Mr. Sanders’s “political revolution” flamed out with black voters, and Hillary Clinton fell short of the robust black turnout she needed to defeat Donald J. Trump.

This time around, Democrats are weighing how to reach out to the black community in the primary without losing the ability to appeal to the suburban and working class whites who propelled Mr. Trump to victory. As the party searches for a candidate who can combine those messages — from a field likely to include several racial minorities — many black voters want to be engaged in a manner that reflects their electoral power, and not passed over in favor of a strategy that prioritizes Mr. Trump’s heavily white coalition.

With that in mind, potential Democratic candidates interested in the 2020 nomination have begun reaching out to black leaders and are testing messages for black voter outreach. This courting is particularly critical for white, liberal Democrats like Ms. Warren, Representative Beto O’Rourke of Texas, Senator Sherrod Brown of Ohio and lesser-known figures like Senator Jeff Merkley of Oregon.

Ms. Largie warned against white politicians who “talk about their black friends” when around black audiences and then “move on.” Her friend, Dianna McFarlane, 43, said she looks for a politician “who stays true to their message of equality” even around white voters.

“As people of color, we already know what we go through,” said another Morgan State graduate, an engineering student named Tesleem Lawal. “But it’s important to hear white politicians talk about that and acknowledge that.” 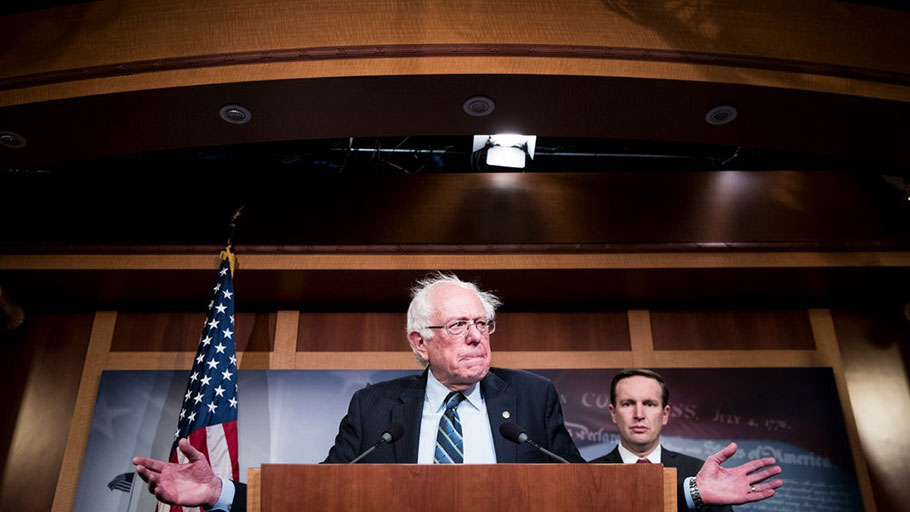 Some of the early black outreach efforts so far have been public, like Ms. Warren’s three recent speeches at historically black colleges or Mr. O’Rourke’s appearance on “Pod Save the People,” the podcast led by racial justice activist DeRay Mckesson.

Other overtures were made in private. Mr. O’Rourke has held calls with the Rev. Al Sharpton, the civil rights leader, and made repeated contact with senior members of the N.A.A.C.P. In recent months, Mr. Merkley and Texas Democrat Julián Castro have reached out to Rashad Robinson, the president of Color of Change, the progressive civil rights advocacy group that has positioned itself as a go-to sounding board for prospective candidates.

Ms. Warren has stood out in her aggressive wooing of black leaders, according to several people who have spoken with members of her team. During a trip to New York City, she arranged a sit-down meeting with Mr. Robinson to discuss issues popular with social justice activists, including the elimination of cash bail and sweeping criminal justice reform.

“The person that is able to beat Trump won’t be running against Trump per se, they’ll be running for a vision of America that’s bigger than him. And that vision of America will have to speak to black voters, explicitly,” Mr. Mckesson said in a statement. Several prospective candidates reached out to Mr. Mckesson in order to appear on his podcast, including Mr. O’Rourke and lesser known presidential candidates such as Representative John Delaney of Maryland.

Mr. Robinson, the head of Color of Change, said candidates seeking to run in 2020 are not asking for endorsements or statements of support at this time. He said his meeting with Ms. Warren and others was more about discussing policy issues, rather than campaign strategy. The meetings come as several possible presidential campaigns, including that of Mr. Sanders, have made hiring more diverse campaign staffers a top priority.

“I think some of the candidates don’t get that they’re going to have to actually come with a bold agenda,” Mr. Robinson said. “If candidates think that this is just about who can beat Trump, they’re going to have a rude awakening. People can hate Trump and not love the opposition. It actually has to be about putting out something that allows people to feel like they are connected and their community’s issues are being addressed.”

The behind-the-scenes activity signals just how different this upcoming primary stands to be for Democrats. Not only are multiple black candidates expected to run, including Senators Cory Booker of New Jersey and Kamala Harris of California, but several white candidates are confident they can successfully compete for minority votes.

This includes people like Ms. Warren and Mr. Merkley, but also Mitch Landrieu, the former New Orleans mayor, who is also said to be mulling a presidential run. Mr. Landrieu burst onto the national stage with a well-received speech about institutional racism and the Confederate monuments in 2017. 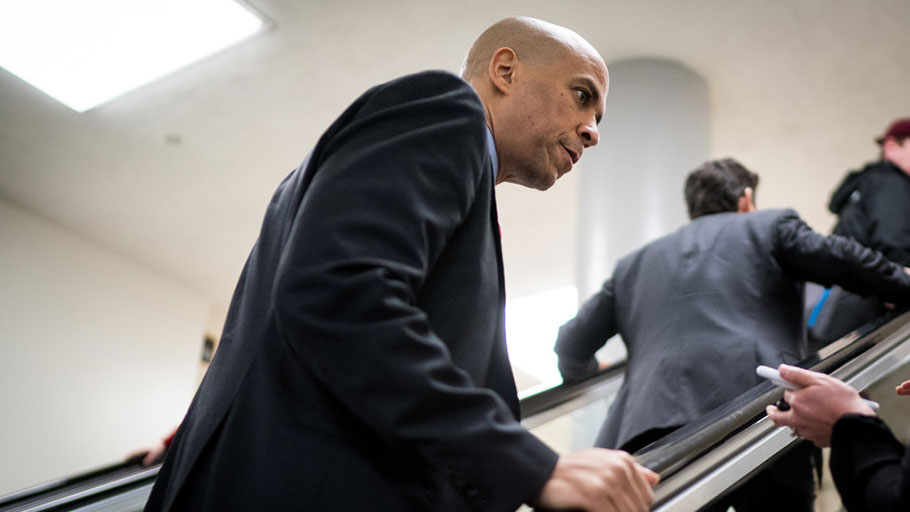 Mr. Brown, the Ohio Democrat also considering a presidential campaign, said it’s important that Democratic progressives make a distinction between President Trump’s “phony populism” and a true populist message, which does not divide on racial or religious lines.

In an interview, Mr. Brown said those who characterize him as a politician for the “white working class” are missing the point, because his message on the “dignity of work” — which is inspired by a speech from Martin Luther King Jr. — specifically acknowledges the existence of discrimination and has support throughout Ohio’s minority communities.

“I never talked about the “white working class” — I talk about workers,” Mr. Brown said. “If we talk about the minimum wage increase, or if we fight against tax cuts for the rich or if we passed better trade policy — that will help black workers every bit as much as it will help white workers. And in many cases, it will probably help them more.”

“My message is never to segment white workers and black workers except when talking about discrimination against black workers,” he said.

The road forward will not be easy. In 2016, even as Mrs. Clinton enjoyed widespread support from black political leaders and won an overwhelming share of black votes in the primary and general elections, she was plagued by accusations that her political persona was inauthentic.

Images of Mrs. Clinton performing hip-hop dances like the Whip and the Nae Nae on national television or talking about her love of hot sauce remain punch lines for many black voters, some of whom took such instances as evidence Mrs. Clinton was “pandering” for minority votes. (Mrs. Clinton does, in fact, love hot sauce).

There was also a significant generational gap among black voters in the 2016 Democratic primary, with younger black voters significantly more likely to be open to the populist message of Mr. Sanders than older generations, who overwhelmingly backed Mrs. Clinton.

In 2020, progressives need to do a better job of tailoring their message to older black voters, said Yvette Simpson, incoming head of Democracy For America, the progressive political group that backed Mr. Sanders in 2016. These are the voters — particularly in the South and the urban Midwest — who dictate the party’s future agenda and candidate, she said. 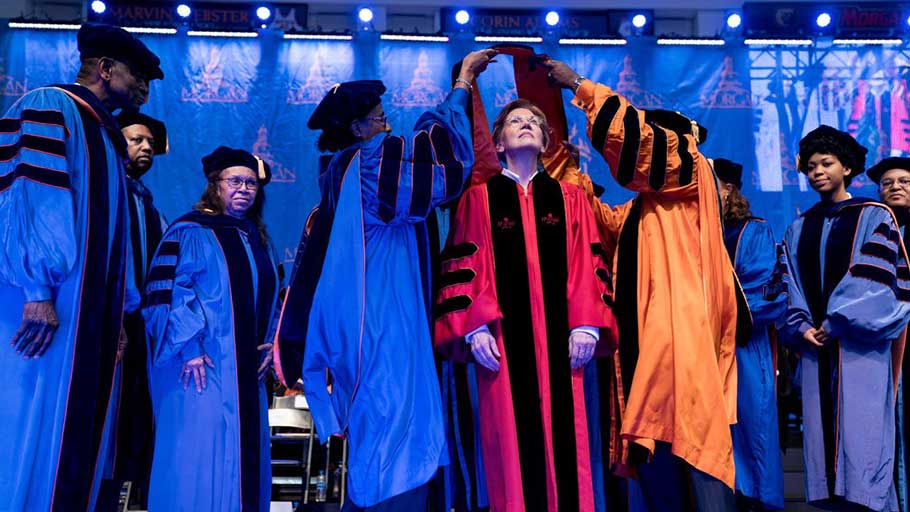 Ms. Warren has stood out in her aggressive wooing of black progressive leaders, according to several people who have spoken with members of her team. Credit: Erin Schaff for The New York Times

“Black and brown voters are done with you showing up at my church right before the elections,” Ms. Simpson said. The candidates who will be successful with black voters, she said, are the “ones who have strong local presences, who are setting up offices and hiring local people in those offices. It will be the ones constantly asking, ‘What can we do?’ and showing a commitment to come back and do that work over and over again.”

Ms. Simpson said she has not heard from any prospective candidates, and fears too many are taking advice from the wrong voices.

“You can’t just have the one or two black or brown validators as your only connection to the community.”

In Baltimore, many of those interviewed expressed excitement about the broad range of potential Democratic candidates.

Les Levi, a commodities trader and Morgan State alumnus who attended the graduation, said he was looking for someone with “mass appeal,” because the country is currently so divided. Esther Sakyi, a 23-year-old graduate, said she wants someone who will inspire the next generation.

Sherry Clemons, 60, said she appreciated when Ms. Warren said “I am not a person of color,” in her Morgan State speech, because it made clear she was operating from different life experiences.

“She made clear she recognized what’s going on, but also she made clear that she’s white, and she doesn’t understand everything,” Ms. Clemons said.

But they were also clear that special attention would be given to black candidates like Ms. Harris and Mr. Booker — if they became viable.