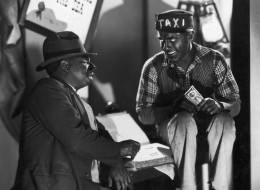 NEW YORK — NEW YORK (AP) — Is donning blackface to dress up as a favorite TV character ever OK for Halloween?

How about a bloody hoodie and blackface for a costume riff on the slain teen Trayvon Martin, or full-on minstrel at a splashy Africa-themed party for the fashion elite in Milan?

Each of those costumes made headlines this Halloween season. And the answer to each, African studies and culture experts said, is never.

“The painful history of minstrelsy is not that long ago for us to think that now, somehow, we can do it differently or do it better,” said Yaba Blay, co-director of Africana Studies at Drexel University in Philadelphia.

Julianne Hough found that out the hard way. She apologized on Twitter over the weekend amid criticism for darkening her skin for a costume as Crazy Eyes from “Orange is the New Black” at a Hollywood bash.

Hough explained on Twitter: “I am a huge fan of the show Orange is the New black, actress Uzo Aduba, and the character she has created. It certainly was never my intention to be disrespectful or demeaning to anyone in any way. I realize my costume hurt and offended people and I truly apologize.”

There’s a fine line between mockery and tribute — and it’s a line that blackface has the power to obliterate, said Marita Sturken, professor of media, culture and communication at New York University.

“It’s never something very simple, and if you’re going to don a costume and put on a black face there’s no possibility of nuance there,” she said. “It doesn’t matter that it was a character from a TV show. That doesn’t get her off the hook. If she’s going to put some substance on her face, that constitutes blackface and this incredibly complicated history gets evoked.”

“It’s constantly a form of entertainment that backs itself into all kinds of trouble, whether political trouble around slavery or a kind of mental trouble having to do with fantasizing about black people,” said Lott, who wrote the 1993 book “Love & Theft: Blackface Minstrelsy & the American Working Class.”

As for Hough, he said: “It’s just a stupid thing to do. It’s a racist thing to do. What blackface does is give the white people privilege of representing black people, of taking black images and treating them as a thing owned.”

Kelsey Crowe, who teaches social work in San Francisco, has been following the fracas on Facebook. She sees more tribute to Crazy Eyes than hatred in Hough’s costume. Other recent examples are far more troubling, she said.

One was in blackface with a simulated bloody bullet hole at the chest and the other simulated a gun to the head of the faux 17-year-old while dressed as George Zimmerman, the neighborhood watch volunteer who fatally shot Trayvon in Florida and was acquitted in court.

She was also “not into” the minstrel costumes in Milan. But the look for Hough “didn’t strike me as exploitative at all,” she said.

“In other cases blackface is used to make fun of people. I really saw this as a way to embody a character that you like,” said Crowe, who will be a cat for Halloween with her 3-year-old daughter.

“Everybody likes the character of Crazy Eyes,” she added, “but I guess that could be said of Aunt Jemima, too.”

Bad judgment on blackface for Halloween is nothing new to Blay.

“I’ve taught at predominantly white institutions for seven years,” she said. “And every Halloween like clockwork there is a blackface incident, if not on our campus then on somebody’s campus.”

What if Hough, the “Rock of Ages” singer, dancer and actress, had eliminated blackface from the equation, keeping her simulation of the Bantu knotted hairstyle worn by the character, along with the orange prison jumpsuit she and her friends zipped on as a posse of female inmates from the Netflix series?

“Yes, leave the skin color alone. Leave the stereotypical performance of it and I would imagine to some degree that could be middle ground,” Blay said. “People dress up as other people all the time. That’s what happens at Halloween. But she didn’t do that. And as far as Trayvon, no. Never.”