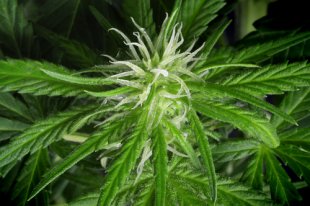 Editors' ChoiceWar on the “War on Drugs” Posts

Cannabis-Based Batteries Could Charge Your Phone in Seconds

You Are Here: Home » Blog » Initiative Posts » War on the “War on Drugs” Posts » Cannabis-Based Batteries Could Charge Your Phone in Seconds

On top of its vast medicinal benefits and a “high” that’s safer and mellower than alcohol, what if cannabis could also power a cheap, sustainable super battery and forever change the energy game? It sounds like a far-fetched dream cooked up by Cheech and Chong after a bong rip or three, but it’s possible, according to a team of researchers at the University of Alberta.

During the American Chemical Society’s national meeting in San Francisco on Tuesday, engineering professor David Mitlin (who now works at Clarkson University in New York) presented the findings. The study he led investigates the potential for industrial hemp (the non-psychoactive cannabis plant closely related to marijuana) to aid in the creation of extremely efficient batteries called supercapacitors, or “supercaps.” By heating hemp fibers, the researchers were able to rearrange the plant’s carbon atoms to create thin, two-dimensional sheets, or nanosheets. Those nanosheets are then used as electrodes (electrical conductors) in the supercaps.

Prior research into supercaps broke ground using graphene, rather than hemp, to create the nanosheets with unmatched results for energy storage. Since then, scientists have been looking for ways to use “graphene’s unique properties to build better solar cells, water filtration systems, touch-screen technology, as well as batteries and supercapacitors. The problem is it’s expensive,” ACS reported in a press release.

The recent hemp study shows hemp to be more efficient than graphene, and 1,000 times cheaper, since hemp is fast-growing and relatively easy to process.

“Our device’s electrochemical performance is on par with or better than graphene-based devices,” Mitlin said in the ACS press release. “The key advantage is that our electrodes are made from biowaste using a simple process, and therefore, are much cheaper than graphene.”

Miltin told the meeting room on Tuesday that hemp supercaps could largely transform the way electronics are powered going forward.

While today’s rechargeable batteries “sip up energy over several hours,” supercaps charge and discharge within seconds. In theory, you could plug a supercap-powered device—a future smartphone, for instance—into the wall for just seconds and it would be completely charged.

“The hemp-based devices yielded energy densities as high as 12 watt-hours per kilogram, two to three times higher than commercial counterparts,” the ACS press release explains. “They also operate over an impressive temperature range, from freezing to more than 200 degrees Fahrenheit.”

The lingering problem with supercaps is that they lack energy density, which means they still can’t store as much energy at a time as existing batteries. Researchers have been looking into designing better electrodes to enhance that energy density, which is why Mitlin and his team started looking into hemp. While scientists had been investigating hemp’s energy potential for a while, the trick has been figuring out how to process it.

“We’ve pretty much figured out the secret sauce of it,” Mitlin said to ACS. “The trick is to really understand the structure of a starter material and to tune how it’s processed to give you what would rightfully be called amazing properties.”

ACS reports that the researchers’ process involved heating the hemp fibers for 24 hours at a little over 350 degrees Fahrenheit, “then blasted the resulting material with more intense heat, it would exfoliate into carbon nanosheets.”

Based on his supercap findings, Miltin started a company called Alta Supercaps to commercialize his high-temperature energy storage systems, looking to the oil and gas industries.

“We’re past the proof-of-principle stage for the fully functional supercapacitor,” he said to ACS. “Now we’re gearing up for small-scale manufacturing.”

The biggest hurdle remaining for hemp-based supercapacitors is the U..S government’s continued blockade of all things cannabis—including hemp. The U.S. imports hemp products, and it’s legal for very limited research purposes, but otherwise generallyprohibited by the feds. Some states have passed laws allowing for (heavily restricted) industrial hemp cultivation, but as with medical marijuana in 23 states and recreational marijuana in Colorado and Washington, those laws do not apply at the national level.